Ask anyone who has ever built a boat and they will tell you the experience is all about the journey, rather than the destination. 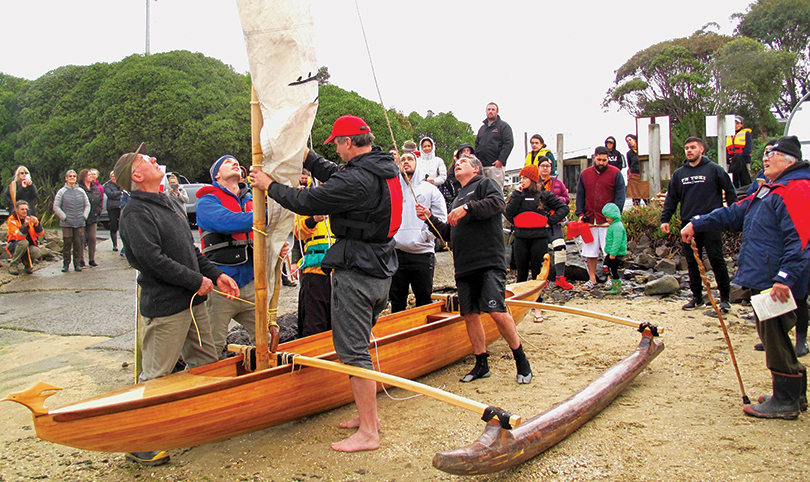 Above: Members of the Hauteruruku ki Puketeraki Waka Club raise the mast for the first time on their latest vessel, Hiwa-i-te-rangi, an 18-foot waka ama built by its younger members.

For members of the Hauteruruku ki Puketeraki Waka Club, the journey started more than a decade ago with the vision to build Hauteruruku, a lightweight 18-foot double-hulled waka unua based on a traditional Polynesian design.

Ten years later the club has just launched the newest addition to its fleet, Hiwa-i-te-rangi, an 18-foot outrigger-style waka ama based on the same hull design of its double-hulled sister.

The difference is that the new waka ama was built by a team of 40 young volunteers, many of whom had never used woodworking machinery, hand tools, or power tools before, let alone built a boat.

Their reward for two years of hard labour was evident from the smiles on their faces as they launched Hiwa-i-te-rangi on the estuary of the Waikouaiti River at Karitāne on an overcast winter’s day in July.

Fittingly for the young crew who built it, the name Hiwa-i-te-rangi represents the youngest star in the Matariki cluster – the star to which you send your dreams and aspirations.

On its maiden voyage, a gust of wind filled the crab claw sail and the lightweight hull accelerated effortlessly across the estuary, displaying the lively turn of speed this style of Polynesian outrigger is renowned for.

The new two-person waka ama will be ideal for an experienced sailor to teach a young person skills to give them confidence to handle the boat on their own.

The launch was a very proud moment for the Hauteruruku Waka Club, says one of the project leaders, Suzi Flack.

Three generations of her family were involved. Her father George Meikle (76) and husband Brendan Flack were mentors for the young builders, and her daughter Georgia-Rae was the project’s artist, as well as part of the building crew.

“It was so much more than building a waka,” Suzi says. “The time that we have all had together; the confidence and skills that people have acquired along the way.

“It has really brought people to the rūnaka and into the club, and I’ve seen interactions in other facets of life here.” 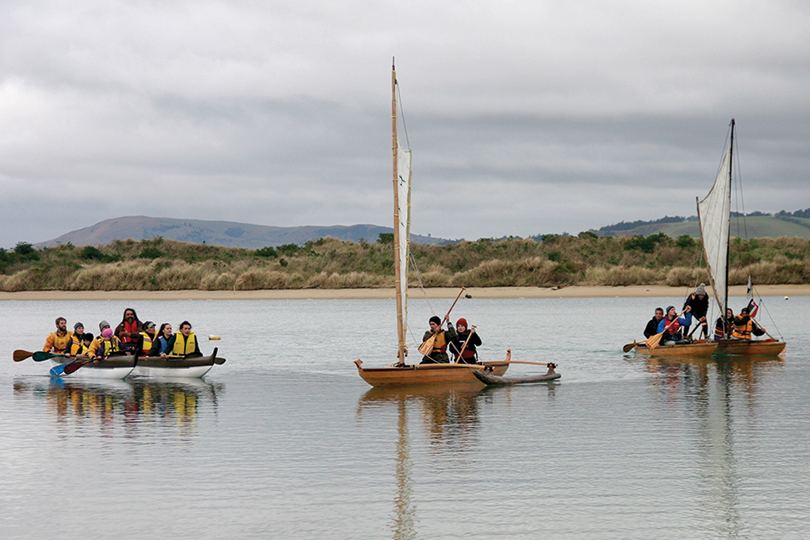 Club members have made connections with whānau from Gore Bay, and from Ngāti Whātua in Dargaville. They have exchanged waka with these groups, and visited the Hui Te Ananui a Tangaroa New Zealand Maritime Museum in Auckland on a northern hīkoi to inspect traditional waka from the Pacific Islands.

They have also welcomed leading waka navigators on to the Kāti Huirapa ki Puketeraki Marae at Karitāne, reviving maritime traditions in southern waters by linking the rūnaka to a wider support network of waka builders and navigators.

“You can’t really say we’ve just built a waka,” Suzi explains. “We’ve created a community of whānau, really. It has been amazing, culminating in the launch day when everyone came, including guests from Dargaville and Gore Bay.”

Hiwa-i-te-rangi is a continuation of the journey for members of the Hauteruruku Waka Club. After building the double-hulled Hauteruruku, the club was loaned the 29ft Pūmaiterangi for two years by the Te Toki Voyaging Trust, and took both vessels on a voyage on three inland lakes to mihi to Aoraki (Mt Cook).

This journey sparked interest in younger members of the rūnaka to build a larger vessel capable of coastal voyages.

Project leaders encouraged the younger people to “start small” by building a smaller vessel to develop their woodworking, laminating, and fibreglassing skills. They learned to use power tools like thicknessers, bandsaws, drills, and sanders before attempting a larger vessel.

The project had financial support from the Ngāi Tahu Fund. A combination of native and exotic timbers and modern strip-plank and fibreglass construction techniques were used for the waka.

Many of the young boat-builders – including a core group of 10 or 12 – are university students who have a connection to Puketeraki through the University of Otago’s post-graduate Te Koronga Indigenous Science Research group. They had to juggle working bees on the waka with their studies, writing theses, holidays, shift work, and family commitments. 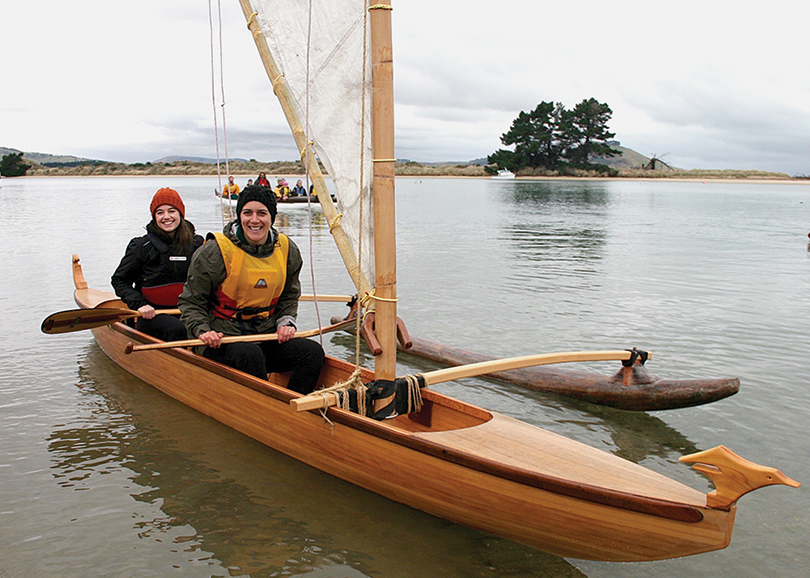 Above: Georgia-Rae Flack (left) and Shanele Kowalewski bring Hiwa-i-te-rangi back to shore after its maiden voyage.

Meanwhile, the design for Hiwa-i-te-rangi evolved around the resources the club already had. The group’s visit to the New Zealand Maritime Museum confirmed their own instincts that they should use whatever materials they had available.

The club already had the hull frame and mould used to build Hauteruruku. They also had some kahikatea timber left over from that project. Originally sourced from Central Otago, it was dry, well-seasoned, and had been stored for about 30 years.

The kahikatea was ripped down to 5mm strips to plank the hull and to build the laminated beams joining the hull to the ama (outrigger). The hull has two full-length Oregon stringers and a hard-wearing Australian hardwood rubbing strake.

There are buoyancy compartments built in at each end for safety. The decks are covered with Meranti marine ply, and the seats are rimu.

The bamboo mast and boom came from the Hokianga region, donated by the Mules whānau, who have strong links with Karitāne including a daughter and mokopuna living there.

The young builders had seen kōrari – the seed stalks of harakeke, known as “claddies” in the south used to build lightweight surfboards, so they were keen to experiment with that material to build the ama.

Coincidentally, harakeke had a prolific flowering last summer, with the tallest stalks anyone had ever seen. So the young builders had some great material to work with, and embraced the challenge.

“It was a real labour of love cutting and shaping the pieces down to size, almost like making a giant jigsaw and fitting it together on the stringer,” Suzi says.

“People left them to it, because that was their thing. We didn’t really know if it was going to work, but Georgia-Rae had complete faith to keep going.”

Georgia-Rae drew a freestyle design of a mythical bird inspired by Waitaha rock art drawings and that design now graces the sail, which in itself was recycled from a cut-down yacht sail.

Suzi says the project has been a long journey, taking two years rather than the year they originally anticipated.

“But the kaupapa is so much bigger than building a waka – it’s about all the connections along the way, and the growth that has happened.”