Home is where the heart is 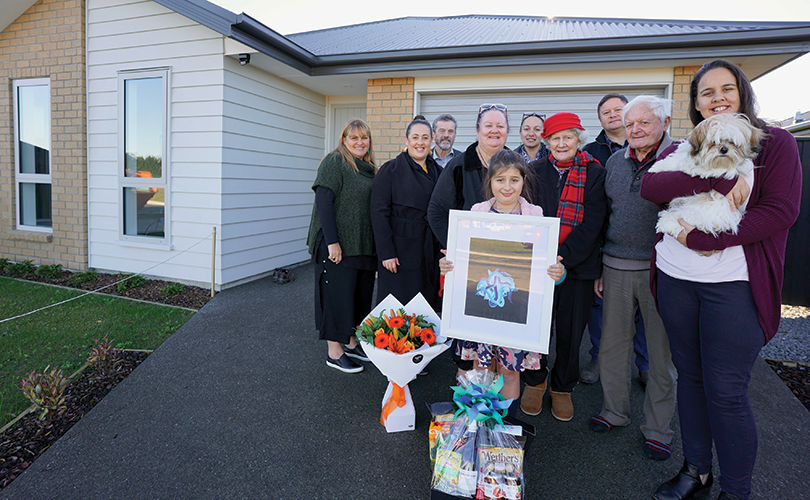 Above: Samantha (far right) and her whānau outside her brand new whare in the Karamū development, bought as part of the Shared Equity Housing.

“Let there be peace in this home” – a simple sentence from Koata Te Maiharoa that wrapped his granddaughter Samantha’s new Christchurch home in a korowai of love.

“And people do love this house,” laughs Samantha. “They come and visit, say what a comfy home it is, and then fall asleep on the couch.”

After six years of sharing her parents’ house with her daughter, Brooklyn, the opportunity to now have friends over for dinner in her own home is the culmination of a three-year journey to home ownership.

Samantha signed up to participate in the Shared Equity Housing initiative offered by Te Rūnanga o Ngāi Tahu in 2016. The scheme was a pilot programme based in Ōtautahi, intended to help Ngāi Tahu whānau purchase their first home. Te Rūnanga o Ngāi Tahu purchases up to 30 per cent equity in the home, meaning that whānau only need to come up with a deposit for the remaining 70 per cent.

“I was at the marae for a whānau meeting and they were talking about the programme,” says Samantha. “Then I received an email asking if I was interested in knowing more, which I was.”

Samantha filled out and sent in an application form. It was promptly declined.

However, ka mate te kāinga tahi, ka ora te kāinga rua. The decision created a life-changing moment for Samantha. One of the conditions of joining the programme is that applicants have to work with Mokowhiti, a pastoral care provider of services grounded in kaupapa Māori. It was through this that Samantha met Trudy Thomson, a financial literacy facilitator assigned to the shared equity initiative.

It was a challenging time. Samantha freely admits that she was living pay check to pay check, and she had quit her job in early childhood education to pursue a career in primary teaching. She didn’t meet any of the financial requirements for home ownership.

According to Trudy, this is typical of many of the people she works with. She says that Samantha is part of a younger generation of Māori who have better access to education and opportunities that can assist with changing realities for their whānau, but who are still nearly all lacking in one key skill: financial literacy. 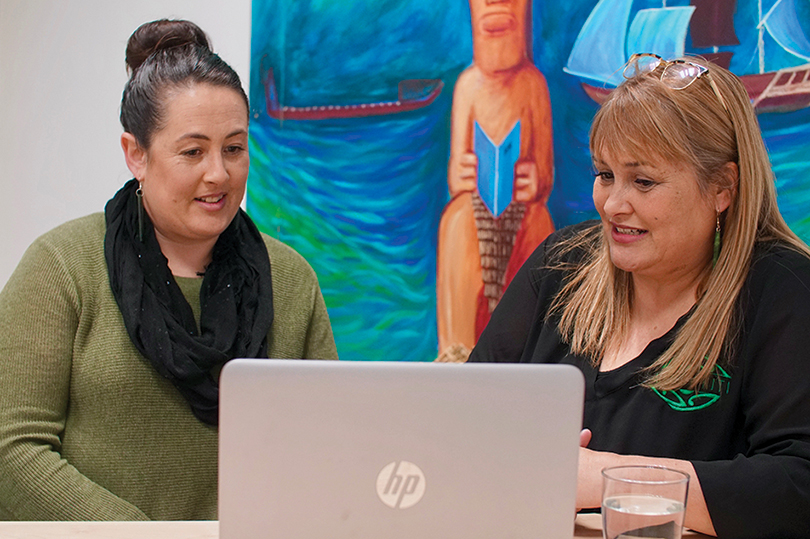 Above: Angela Blair and Trudy Thomson are the team helping Ngāi Tahu whānau into home ownership.

Once Samantha had a goal in place – a home for her now eight-year-old daughter Brooklyn – and some advice on budgeting, the magic began to happen, just as Trudy expected.

“I never thought I could save enough, but as soon as it started growing a wee bit, then it became fun to see the numbers go up,” says Samantha. “Before that I didn’t save a penny.”

It was an equally rewarding journey for Trudy, who has grown close to the young family. “Samantha is an amazing young woman. She realised quickly that purchasing a home is a long game. So while this has been a long-winded three-year journey, it’s been the best outcome for her.

“I like to teach whānau about making good long-term decisions regardless of whether it is housing or purchasing anything. If you’ve worked hard for your money, you need to make good decisions about it,” says Trudy.

The easiest tool for doing this, she says, is to make a list. “Write down all the pros and cons. It’s as simple as that.” She tells the story of one prospective applicant for the shared equity programme who wanted to buy a house in a certain location. “We worked out everything from what his mortgage would be, what he could rent it out for, literally everything that would enable him to make an informed decision, not an emotional one. He came in with one idea, but went out with another.”

While several families have bought homes through the pro-gramme, others have bought on the open market after starting the process and discovering, with help from Trudy working through their finances, that they qualified for a mortgage. Others have opted out of the scheme altogether.

“Some people don’t want their finances scrutinised,” Trudy says. “Either they just don’t want to, or they don’t have the ability to provide three months’ worth of bank statements. They don’t have a printer, they aren’t engaged with a bank, or, in some cases, have never even walked through the door of a bank.”

Trudy takes her laptop and printer with her to every meeting so she can do any printing. She goes with her clients to the bank. She explains percentages and prioritising debt – even explaining the difference between good debt (a student loan) and bad (hire purchase). She helps set up accounts, and provides the contacts – everything to help people start having those very confronting conversations about money. “It’s a really important relationship to have, so I’m even honest with them about the mistakes I’ve made in my life with my finances,” she says.

Angela Blair is a Development Adviser with Tokona te Ao (Tribal Economies) – the workstream of Te Rūnanga o Ngāi Tahu dedicated to raising the horizon for Ngāi Tahu whānau through economic development. Angela says that the shared equity programme is a key part of this commitment.

“For us it’s about Ngāi Tahu whānau having access to appropriate, adequate, and affordable housing that meets their needs.”

The initial shared equity pilot programme supported five whānau into their own homes, and since then, two more families have purchased through the scheme. Tribal Economies plans to grow the scheme, but first needs a more accurate picture of Ngāi Tahu home ownership.

“In 2013 home ownership was sitting around 42 per cent for Ngāi Tahu whānau, but from conversations we’ve been having, we know that it’s dropped,” says Angela.

“We want to study the needs and aspirations of our whānau so we can identify the best homes that will suit them. Homes that are in the right location, what developments are going on in the region, what the Ngāi Tahu whānau household position looks like in these areas, what incomes are, and what’s affordable.”

This information will dictate how Tribal Economies can support whānau in each region of the Ngāi Tahu takiwā.

“However, that support doesn’t necessarily mean home ownership, because that is not everyone’s aspiration,” Angela says.

“This could in part be intergenerational. If your parents rent there is a high chance that you won’t move into home ownership; and that you might be quite happy to live your life in a warm, safe home that is a rental. You might not even know that home ownership is an option.”

That’s where Tribal Economies steps in. Angela says Tribal Economies reaches out to whānau who are members of the Whai Rawa savings programme to let them know about the shared equity option and the process involved. Whai Rawa is able to identify those whānau meeting key criteria and with aspirations towards purchasing their first home and let them know about the offering. This fulfils one of the key withdrawal criteria for Whai Rawa, encouraging first home purchases while supporting those whānau who need a little further help to make it happen.

“There are options, whether it’s using KiwiSaver withdrawals, Home-Start grants, Welcome Home Loans or shared equity programmes – but whānau need to be prepared to have their finances closely examined. They also have to be completely honest. The
challenge always is that it’s really easy to accumulate debt, but it’s just not easy to save.” 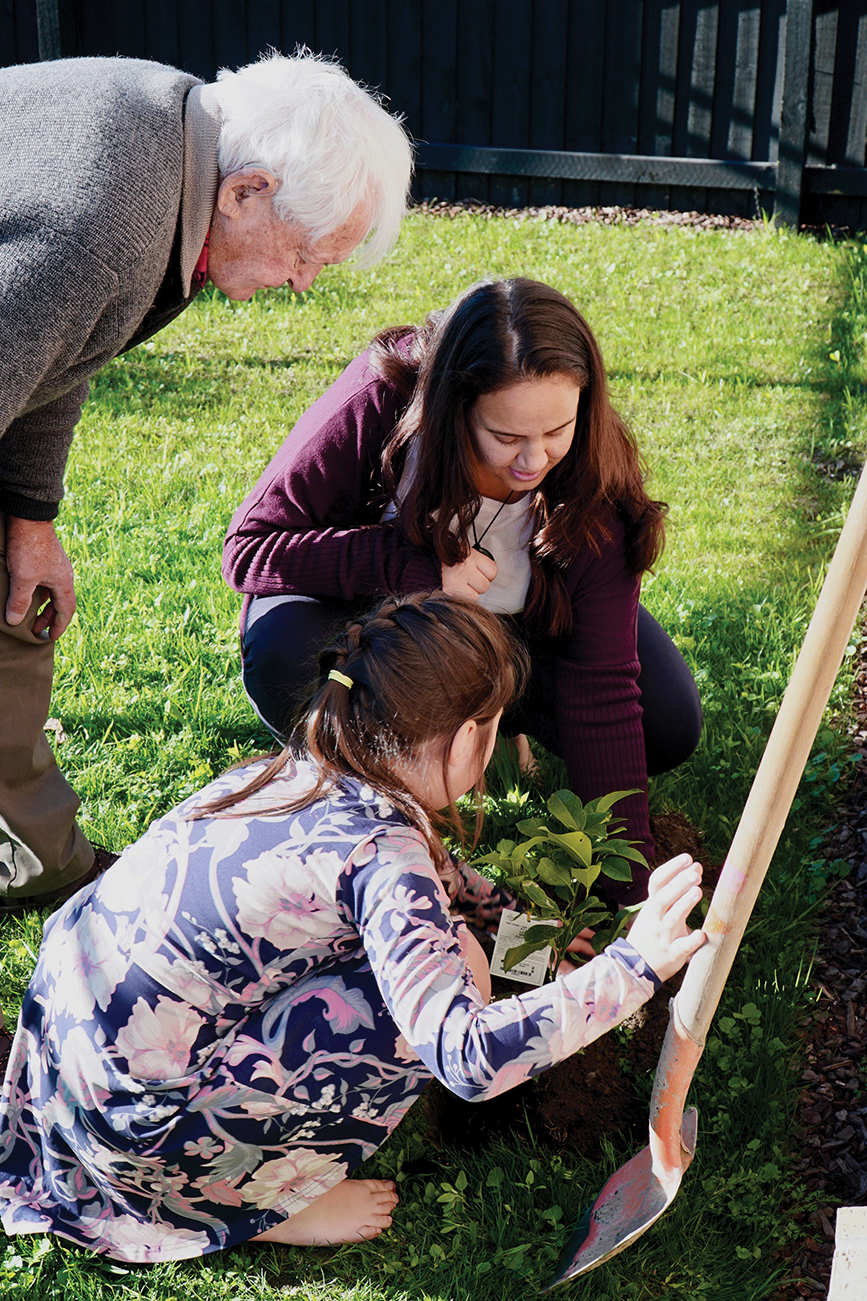 Above: Samantha planting a tree in the backyard of her new whare with daughter Brooklyn and grandfather Koata.

Add in high rental prices, micro-financing companies, and payday loans, and the outlook for home ownership can be bleak. And once you do get a mortgage, unexpected bills can contribute to sleepless nights.

“That is not the idea for this programme,” says Angela. “We are not about increasing anxiety. It’s about growing home ownership potential, so we would never let a whānau take on a commitment they couldn’t afford. But we all know that life gets in the way of our plans sometimes, which is why Trudy and Mokowhiti stay engaged with whānau long past the day they move into their new home.”

“Once you are financially confident, you can be more assertive. Once you realise banks or businesses don’t really care how hard you worked for your money, they just want you to spend it with them, you can make an informed choice about what you want to do.”

Samantha made a choice to embrace the discipline of having a budget, and to resist the impulse to spend big (even though it’s meant sacrifices like not visiting her best friend in Canada). It’s meant embracing the grit – “my favourite value,” laughs Trudy – that is part of the rigour around home ownership, even with a shared equity portion.

The challenges have been real, but the rewards have been huge. For Samantha and Brooklyn, the scheme has made it easier to get a foot on the property ladder, and with far less stress.

In the wake of Samantha’s grandfather’s blessing, given in the presence of four generations of her family; “It’s given me peace of mind,” she says.