In the mid-1990s, the New Zealand Association of Psychotherapists (NZAP) began exploring the ways psychotherapy could be guided by the articles and spirit of Te Tiriti. A decade later Waka Oranga, The National Collective of Māori Psychotherapy Practitioners, was born. Kaituku Haumanu Hinegnaro Verity Armstrong talks to kaituhi Ila Couch about the impact of colonisation on our collective mental health and the importance of indigenising psychotherapy. 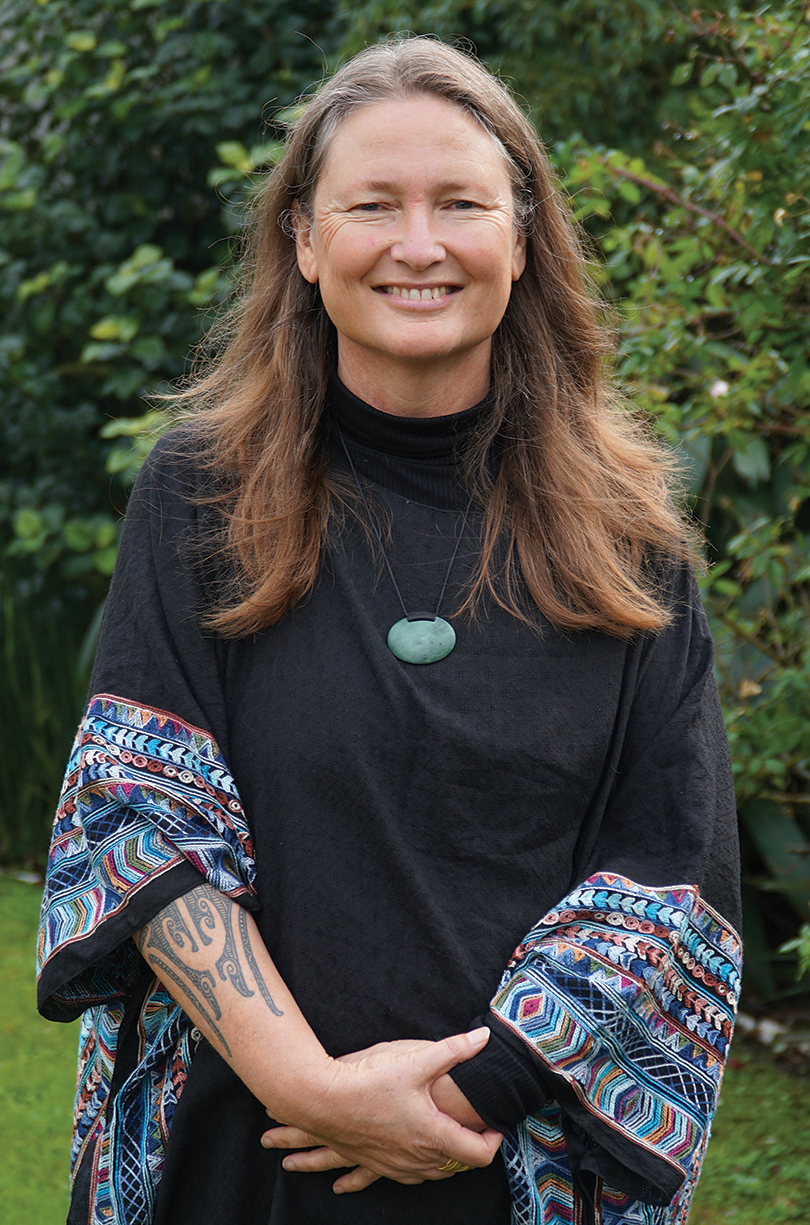 Verity Armstrong (kāi tahu, kāti māmoe – ōraka aparima) rolls up her sleeve. We are chatting through computer screens, but I lean in instinctively as she turns her arm to show me the detail and design of her tā moko. “Was it painful?” I ask. The irony of her response was not lost on the psychotherapist who makes a living encouraging people to talk: “The actual tattoo felt like it happened in a second. The hardest part was the talking.”

When Verity went to get a tattoo with her daughter Eve there was no real talk of tā moko, until artist Josh Paki asked Verity what was holding her back. “I just didn’t know the way in,” she says. “Some of the stories in our family have been around distancing and denial of our Māoriness. My grandmother never talked to my mother about her Māori mother, and my mother’s generation had no knowledge of their cultural background.”

The “way in” came through whakawhanaungatanga during the consultation process and actual tā moko. “Josh really opened the door for me. He shared stories about his whānau, we connected through whakapapa. The care, understanding, taking time for him to hear my story and for us to connect – all of it was just so powerful.”

In psychotherapy, European words like inter-subjective describe what is going on between a therapist and a client, but Verity says for her it is about wairua. “When you are working with people you become connected. Aroha mai, aroha atu.”

A specialist in treating sexual trauma, Verity spent 15 years as a social worker providing services to families in West Auckland dealing with domestic abuse and sexual violence. Transitioning into psychotherapy has enabled her to invest time in long-term care. “Psychotherapy offers people a supportive, gentle way to start delving into beliefs, thoughts and feelings that have often built up from negative experiences. It provides an environment to think about those things together.”

Psychotherapy was developed in the late 1800s by Austrian neurologist Sigmund Freud, whose theories and therapeutic techniques aimed to bring thoughts or unconscious memories to the surface through dialogue. Verity believes whakaaro hinengaro works well for Māori and fits within the framework of te whare tapa whā. Backing up this belief is the work of Ngā Ao e Rua – a group of Māori, Pākehā and tauiwi psychotherapists who, in 2004, began exploring a bicultural approach to hauora hinengaro. By 2009 – with the guidance and mentorship of Dr Haare Williams – Waka Oranga was created. “The primary purpose of Waka Oranga is to remind NZAP of biculturalism, the impacts of colonisation and how to find a bridge between te ao Māori and te ao Pākehā,” Verity says. Beyond its role as NZAP’s treaty partner, the kaupapa of Waka Oranga lies in recovering indigenous knowledge and providing support for Māori psychotherapists, including training, practice, and research. The organisation has created He Ara Māori, a pathway for registering kaiwhakaruruhau.

In recent years He Ara Māori paved the way for pioneer healer Hinewirangi Kohu-Morgan to become a registered kaiwhakaruruhau. In 1984, Hinewirangi rejected her studies in psychology at the University of Waikato because they did not serve the needs of Māori suffering the impacts of sexual, drug and alcohol abuse and violence.

“Hinewirangi is an incredible indigenous practitioner,” Verity says. “She established the Māori Women’s Centre in Kirikiriroa and uses taonga puoro to work with Māori men in Te Ao Mārama – Waikeria Prison. On the day of her registration, whakapapa whānau came to speak about and support her work. Hinewirangi had a message: ‘Here I am coming over the bridge, doing the things I need to do for my registration. Why don’t you come over to te ao Māori’.”

Psychotherapy was not introduced to New Zealand until 1947. NZAP was established in Ōtautahi by a London-trained psychiatrist who had seen the benefits of a ‘talking cure’ in the treatment of returned servicemen suffering from what is now called PTSD (Post Traumatic Stress Disorder). That same year Earnest Beaglehole was appointed as the country’s first professor of psychology.

In 1946, Beaglehole and his wife Pearl published a psycho-ethnographic study entitled Some Modern Māori, an account of a small Māori community in the Kapiti Coast District. The study was controversial at the time because it gave an honest account of the detrimental effects of post-colonialisation on Māori including poverty, isolation, and the enduring negative attitudes towards their language and culture. When full integration happened, Māori lost the layer of protection provided to them by whānau, hapū and iwi.

“Māori students coming through the programme still struggle because the training itself is very eurocentric and doesn’t always reflect their worldview. We are also in a bit of a crisis because our registration regulation board is in the process of potentially saying other paths to training are not going to be valid for registration. We are governed by the Health and Disability Act and that does not have anything in its charter about honouring Te Tiriti. It is pretty shocking.”
Verity Armstrong Kāi Tahu, Kāti Māmoe – Ōraka Aparima

The period of assimilation, and the physical and spiritual divorce from whakapapa and whenua, have created a flow-on effect on Māori that has continued for generations, resulting in the types of trauma Verity finds herself working through with clients today. “Whenever we sit with clients in Aotearoa, we sit with someone who has been impacted in some way by the colonisation of this country. Realising the impact colonisation has had in previous generations, and how that is playing out, is a huge part of what comes up during our sessions.”

Self-awareness is crucial to the therapeutic relationship, so when it came time for Verity to write her dissertation as part of her Masters in psychotherapy, she chose to dive into the origins of disconnection within her own whānau.

Born in Dannevirke and raised in Auckland, Verity says she was largely unaware of her whakapapa until her teenage years in the 1980s when whānau began to piece information together. “Even then I didn’t claim my whakapapa,” she says. “I kind of thought of myself and talked about myself as Pākehā with Māori ancestry.”

It was during her training and through the support of Waka Oranga that Verity was able to fully experience herself as Māori. She began using the pūrākau of her whānau to begin her dissertation, titled Our Māori Connection: The impact of colonisation on one Southland whānau. The process took around 18 months of connecting with cousins and discovering stories she says some of the older generations didn’t want to know.

“My great-grandmother got preferential treatment because she was paler than the other kids she went to school with.”

Verity describes her dissertation as a lived experience of the trauma of disconnection and colonisation, as well as the pain of the decolonisation process.

“One of the thoughts of psychotherapy is that we split off painful parts of ourselves, whether that be sexual or cultural. What comes to mind for my mum and her generation is that splitting off from that part of themselves.”

Verity says psychotherapy gently brings those parts back into view so we can think about them, integrate them and have compassion for ourselves. “It’s not talked about much in our country, but we carry it in our psyches. From personal experience within my work, that healing process through connecting in with your whakapapa has to happen. It’s not a sort of blaming victimhood, it is actually a really empowering process.”

With the number of indigenous psychotherapists in New Zealand still very low Verity would like to see the barriers that still exist within the system addressed, especially since COVID and its aftershocks have seen a demand for support around mental health.

“Māori students coming through the programme still struggle because the training itself is very eurocentric and doesn’t always reflect their worldview. We are also in a bit of a crisis because our registration regulation board is in the process of potentially saying other paths to training are not going to be valid for registration.”

In a move echoing Hinewirangi Kohu-Morgan’s stance in the 1980s, some of Verity’s colleagues have chosen not to register – effectively making ACC funding out of reach. “ACC funds long-term therapy where people experience sexual assault or abuse in New Zealand. This is remarkable; however, psychotherapy is expensive and that is something that is frustrating. A lot of Māori aren’t able to access some of the long-term therapies because they are involved with the DHB mental health services, which are primarily about medication.”

Recent budget announcements dedicating $242 million for Māori health along with ACC’s decision to begin registering and funding rongoā Māori practitioners, give reason to be optimistic.

“To refer clients for mirimiri, rongoā or other tohunga practices, is really exciting. There are multi-disciplinary teams that work together in all organisations, and I would love to learn more from other strong Māori healing practitioners.”