The iron will of Heather Skipworth 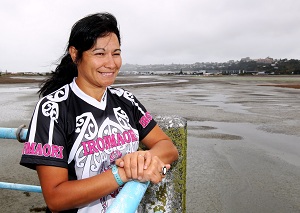 Crossing the finish line at IronMāori is more about the massive feeling of achievement than the numbers on the stopwatch. Nobody knows this more than the event creator, Heather Skipworth. Kaituhi Matt Philp talks to this woman of steel as she prepares to bring IronMāori to the Ngāi Tahu takiwā.

On the opening morning of Heather Skipworth’s career as a lifestyle coach, her first client walked in the door, all 180 kilograms of him, and said that if she didn’t help him to lose weight, he’d die

The plan she came up with was to build a relationship with him, then help him to develop some self-belief. It encapsulates her approach to working with overweight and obese Māori and Pacifica. It’s also the philosophy informing IronMāori, the wildly successful sporting event/healthy lifestyles movement created by Skipworth in 2009.

The first IronMāori staged in Hawke’s Bay drew a field of 300. Last year’s event attracted 2500 mostly Māori participants from around Aotearoa, many of whom had never done anything like it and probably never expected to.

Later this year, the Havelock North-based 40-year-old plans to bring the IronMāori challenge to Christchurch, after making a foray into the South Island with a small event in Nelson in February. The Ngāi Tahu-backed event will be particularly special for Skipworth, who was raised in Hawke’s Bay, but whose whakapapa includes Ngāi Tahu as well as Ngāti Kahungunu.

For Skipworth, IronMāori is much more than a sporting event. In fact, how quickly someone completes the course is the least important aspect. “It’s a kaupapa about health and well-being; the event is just the hook. It’s the journey leading to the day that is the thing for us. What we are doing is creating another whānau. People get nutritional and exercise support, accountability, and are helped to realise their potential by gaining self-belief.”

She calls it a movement, and emphasises the smoke-free, drug-free and alcohol-free ethos of IronMāori. “There are now a whole lot of people around the country who are removing themselves from what they used to do, and are moving into another realm. We’ve had people on benefits who have now completed degrees or are partway through degrees. People have changed career paths. We’ve had couples on the verge of separating who have taken the IronMāori journey together, and have had to come together in the kaupapa — they’ve told us it’s saved their marriage.”

Skipworth’s path to IronMāori wasn’t straightforward. She grew up in Pakipaki, a tiny village south of Hastings, where her mother Ira’s family were based. In 40 years, she’s probably spent only three years living outside of the place.

“My papakāinga keeps drawing me home. It’s a real whānau village — one of those places where you can walk into anyone’s house, and have a cup of tea or something to eat. Kids can ride up and down the street and not get bowled over, and everyone watches out for everyone else.”

Skipworth’s late father Jon was a Te Au from Ōraka (Colac Bay) in Southland, hence the Ngāi Tahu links. She knows little of that side, but has met some of her aunties and has been to Ōraka. “Every time I go south I say that my uncle was George Te Au, because he was well-known down south. I’m very proud of my Ngāi Tahu heritage.”

Father Jon  had a drinking problem but when Skipworth was 12, he started his own counselling service for drug and alcohol addiction. “He wanted to help people, and I think that planted a seed in me.”

Skipworth too has trodden different pathways in her life — she was a postie and then a meter reader for a power company, but felt frustrated with the constraints of her life. Cue the first of the two epiphanies that led to her current work. “I remember one day reading power meters, and thinking, ‘Surely God put me on this earth for something more than giving people bills!’ At the time I was aerobics instructing, and I loved that field; loved the satisfaction people got after I exercised them.”

Something had to change. When a position of lifestyles coach came up at a Hawke’s Bay health provider, she applied. No matter that she had none of the qualifications required. “I had a passion for helping people to achieve. I managed to get an interview and told them I had no qualifications but that I wanted the opportunity, and that I hoped they believed in me.”

She did the job for three years, learning as she went about how to motivate people, building her own confidence as she inspired others. When a chance came up to establish a lifestyle programme from scratch at another provider, Skipworth leaped at it.

“I felt like I’d reached the pinnacle of what I could do in the organisation, and in terms of moving up the ladder there was nowhere left to go. I thought, ‘Here’s an opportunity to test myself, to get some more skills and see if I can do this’.”

She struggled. Only 30 per cent of the participants were achieving their targeted weight, so clearly something wasn’t working with her programme. It was while competing in her first Ironman New Zealand triathlon, at Taupō in 2009, that she found her answer.

“It took me 15 hours to complete, and that’s a lot of time to think. I was thinking of my clients — ‘How can I change those statistics?’ When I finally crossed the finish line there was a feeling I’d never had before, a huge sense of achievement. I realised ‘That’s it! That’s exactly what I want them to feel! Whether it be in exercise, career or whatever, it’s that feeling that you can achieve anything in life.”

By the end of the year, she’d organised and run the inaugural IronMāori event. Larger events have followed every year since, in locations ranging from Napier, to Taranaki, to the Gold Coast. The latter event was a response to the large numbers of Māori moving to the GC for work. “They go to chase the dollar,” says Skipworth. “We wanted to take a bit of Aotearoa there to remind them of where they come from in Māoridom, and that their health needs taking care of, too.”

Skipworth’s achievements with IronMāori have been recognised with a Sir Peter Blake Trust Leadership Award. She shared the honours at Government House that night in 2011 with two CEOs, an entrepreneur, a high-flying lawyer and a former Kiwi league star, and felt, by her admission, slightly miscast. She thinks of herself more as an encourager than a traditional leader.

“I feel I have something in myself that helps people to achieve,” says Skipworth, who draws on Māori concepts such as whanaungatanga in her work with the overweight and obese.

“When you have someone who is 200 kilograms, the conventional approach is to send them to a dietician. But they already know the food they’re eating is wrong, and dieticians tend to speak in almost a foreign language. Our approach is of Māori dealing with Māori; we speak their lingo.

“That’s also what IronMāori does. We build relationships… When they come in we find out their name, ask what their iwi is, and straight away they’re feeling empowered: ‘Yes, that’s right, I’m from Ngāi Tahu, or I’m from Ngāti Paoa’.”

Her explanation of why IronMāori is so popular? Again, she says, it comes back to that idea of whanaungatanga. “People are realising that it’s not a sport where they have to be the fastest. The final participant to finish probably gets the biggest cheer.”

There have been plenty of organisational challenges along the way and a lot of “political stuff” that at times threatened to derail the dream. The experience has motivated Skipworth to seek to stand for the Māori Party in Ikaroa-Rāwhiti this year. “I’ll put my nomination in and see what happens,” she says.

Meantime, there’s an event in Christchurch to organise. Skipworth is looking forward to seeing Ngāi Tahu feel the IronMāori effect on their home patch.