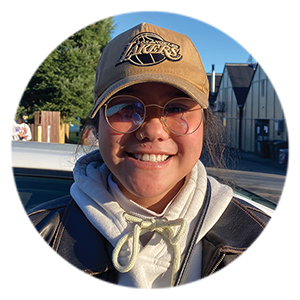 Kia ora! I am a first-year student at the University ofCanterbury studying Māori and indigenous studies witha minor in journalism.
I have four siblings – Briana, Cee,Seven and Soverin as well as our two puppies – Cid and Whero.
I hail from Bruce Bay through my dad, John Barr, and the East Coast, Te Whānau ā Apanui through my mum, Annie.
I’m passionate for change and discussing controversial topics while gaining new perspectives.
My future goals are to teach Māori education in high schools and eventually travel overseas to teach.

What follows is my account of what it was really like to live in a university hall.

The opportunity to be a part of Takere* earlier this year showed me what I am capable of when I want to succeed. After being so indulged in my culture, and being around people with similar lifestyles and passions, it affected me in a lot of ways that I didn’t think it would – and it was truly a privilege to be accepted into such a group. This scholarship and experience have given me so much hope for the year to come and excitement to be moving out and into a new place. Once the live-in academy finished, we thought we were prepared for the onslaught of these new students coming in to live with us but, as they began to move in, we realised that that was not going to be the case.

This was my first hurdle – adjusting to the residents moving in – the fear of all the ‘what if’ situations that my brain creates. It doesn’t help that I deal with anxiety, which is triggered mainly by social situations, so naturally I started spending
a lot of time in my room with even my basic human necessities, such as eating and hygiene, becoming a second priority. The thought of leaving my room some days is too much, and I stay in my space for as long as humanly possible, and I guess this feeling of being so out of control got to my mental health a lot.

Following this, I got COVID, which required 10 days of isolation at Ilam Apartments (UC university hall) as well as a week of self-isolation at Tupuānuku – which for me, and I will admit – I did use as an excuse to maintain my unhealthy habits. Instead of using the time to catch up on the work I’d missed – I used it as a distraction from ‘real life’. During this time, it was a relief that I had no expectations to leave my room and join other residents in the dining hall.

As expected in COVID and seen with a lot of the Takere students, my sleep schedule really bore the brunt of my poor decision-making, and I ended up with an awful sleep schedule. From 9pm to 2am, you could find all the Takere students at one stage or another. We would find each other in the self-catering kitchen and study, eating whatever we could afford, and doing our laundry and other menial tasks that we were all capable of doing during the day. The only reason why we didn’t do these tasks during the day was that we just didn’t feel comfortable being “us” while the other residents were awake. We all had an unspoken agreement that night-time was for us ‘brown people’ and as messed up as our sleep schedules were, we found so much comfort in each other, because as fellow brown people they understand the unconscious bias and judgement that taurima and staff don’t, and we supported each other always – it just happened to be 3am at the time.

The impact that university has had on me in all aspects is completely not what I expected, and I’m sure that many other people in my shoes have had very similar experiences. I am grateful for the opportunities I’ve been lucky enough to have, especially the opportunity to meet 49 other Māori and Pasifika students who went through the pain of high school life and were willing to undergo university life as well.

Universities do their best to cater for us. However, they don’t always get it right. As I mentioned earlier, my first hurdle was adjusting to all the new residents that moved in after our 5-week academy. We went from doing a karakia at the beginning of the day, before kai, before performances, after panels and at the end of the day, to absolutely nothing the moment the new residents came here to live. We were completely indulged with our cultures and then were thrown right back into the white man’s world, which affected us deeply. It felt like we were forced to hide and be quiet because we are too loud and too passionate about things. It is moments like this that really break our character. I am grateful for the place where I live, learn, and experience, but until we live in a world that caters for Māori and Pasifika, we will always feel uncomfortable on the land of our own.

It is safe to say that semester one has been a very self-reflective time and many different things have been learnt, and thankfully many good things have come out of this time. This is a small piece to recognise the perspective of a first-year Māori university student who had higher hopes for their new home.

*Takere is a scholarship programme with a 5-week live-in academy with 50 students. Together we completed a 15-point university course developed specifically for Māori and Pasifika students. We lived in Tupuānuku (UC university hall) as next-door neighbours and shared many experiences that have brought us closer than we could have imagined.