Quentin Hix runs a growing law practice, holds governance roles for Ngāi Tahu, and has two boys who keep him on his toes. Despite those commitments, he’s on a journey to learn te reo Māori. 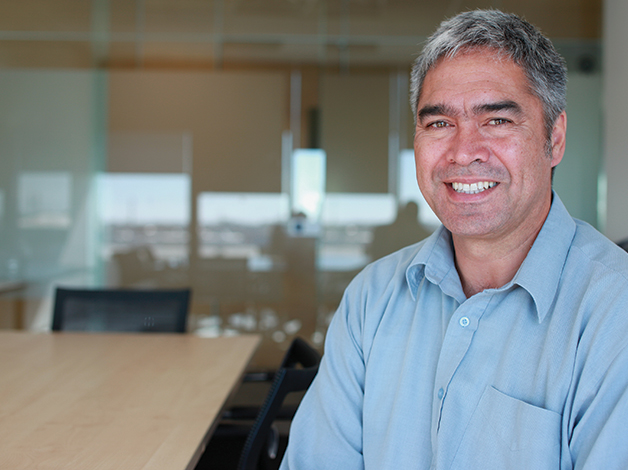 Quentin Hix (Kāti Huirapa) remembers a childhood where te reo Māori was only heard on formal occasions. His tāua and pōua, Rosina and Kaahu Selwyn, who had a hand in his upbringing, were native speakers of te reo Māori, but the language was not passed on to him.

Quentin is currently the rūnanga representative for Arowhenua and has been chairman and secretary at various times, and is a board member of Ngāi Tahu Holdings. These roles have motivated him to gain a greater understanding of te reo Māori.

“When I was young, I spent weekends with my tāua and pōua right up until the age of seven or eight. They lived in a house behind the marae. My pōua was the upoko of the marae, and I remember watching him stand and speak on the paepae”

After his tāua and pōua passed away when he was a teenager, Quentin only had Arowhenua Marae as a touchstone for te reo Māori, and even then it was only sitting and listening during tangi. He went to a mainstream school and not Arowhenua Māori School, which put greater distance between him and opportunities to hear, learn, and speak te reo Māori.

While Quentin was in his senior year at Temuka High School and contemplating university in Christchurch, he recalls an incident where an educator tried to offer him some guidance about his Māori heritage.

“I was pulled aside before leaving school one day, and word must have got around that I was heading up to Christchurch to attend university. I was told that if I wanted to be successful I had to stay away from the Māoris – because they’re bad”.

After university, he started his law career in Christchurch in 1989 and then moved back to Timaru in 1992 for the next stage in his professional career. He lives there with wife Kathy and their two boys, Abraham, 12, and Solomon, 9.

Almost six years ago, Quentin was elected as representative for Te Rūnanga o Arowhenua, an event that would set his te reo Māori journey into motion. He recalls a conversation with Tā Tipene O’Regan, who offered insights about the most fundamental aspects of Ngāitahutanga.

“He spoke about the way our culture was our identity; that without our culture and our traditional practices we would cease to exist, essentially.”

This was about the time when Quentin started to entertain the idea of learning te reo Māori.

“I had an aunty, Libya (Foote) who was taking te reo Māori classes at Aoraki Polytech, and she would tell me how good they were, and would let me know about upcoming intakes.”

Quentin enrolled in night classes. After a year, his confidence had grown and the basics were starting to stick.

“The one thing I had going for me was a handle on pronunciation, and I would put that down to those weekends with Tāua and Pōua, or the bits of waiata I knew.”

Before he could get comfortable with his newfound skills, he was presented with a challenge he felt obligated to meet head-on.

“My aunty passed away, and it dawned on me that we needed someone to speak and represent the family at the tangi. I spoke with Tewera (King) and we drafted a kōrero that I could use at the poroporoaki.”

Quentin remembers how nervous he felt before standing to deliver that mihi, but says it helped a lot with his confidence. Since that first formal delivery Quentin has attended Kia Kūrapa and Kura Reo Kāi Tahu – workshops organised by Kotahi Mano Kāika. The events are a great way to refine language competency, but that’s not the only reason to take part.

“The boys come with me and they love it. They spend their days meeting and building relationships with kids their own age, and form bonds with their whanaunga. Even though they don’t spend time with me in the classroom, they inevitably pick up the reo.”

Quentin admits that being a second language learner is not always smooth sailing.

“You can’t avoid those uncomfortable times in class when the lesson is over your head, or the anxiety that you feel when you’re put on the spot and pushed forward to speak at formal occasions.”

But the challenge of balancing a career, family life, and night classes are all worth it if his boys can see him facing the challenges and pushing through. He also says that it has enhanced the relationship he has with his marae and the people who run it.

“I didn’t set out with a goal to reach complete fluency – I just hope I can foster an interest in my boys, so they don’t have to start from scratch.”

He sees encouraging signs of language growth every time he attends iwi events, and admits to a sense of envy when he hears our rangatahi “speaking with such confidence” on the marae.