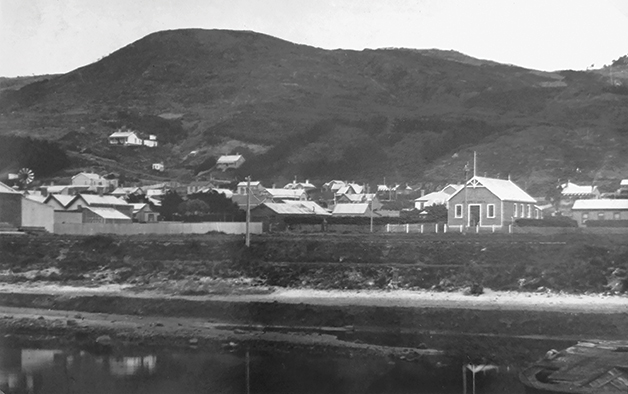 The Waitaha Hall, as it became known, was located on Barrow Street immediately behind the Bluff Town Hall. This building had earlier been Bluff’s smallest church. Erected by a group of Brethren from Plymouth in about 1900, it originally had the name “Gospel Hall” painted in large letters above its front entrance. By the 1960s it was owned by a fraternal society and known as the United Friendly Societies’ Hall or more simply, the U.F.S Hall. The building had a 90m2 main hall with a supper room and kitchen at the rear, and cloakrooms and toilets at the front entrance. The Awarua Tribal Committee purchased this property in 1962 for £1100 with assistance from the Ngāi Tahu Māori Trust Board and the Department of Māori Affairs, and carried out alterations and repairs, mainly to the kitchen, so that it could function as a marae or Māori “civic centre”. Despite its new owners and the ends to which it was now being put, a newspaper article recording its sale and purchase noted that the hall was “still available for public hire.”

“Far to the south in the town of Bluff … in difficult circumstances, a small Māori community descended from Ngāi Tahu, Ngāti Māmoe, and Waitaha tribes, combined to institute an assembly hall with a courtyard to serve as a centre for the practice of Māori songs and the entertainment of visitors.”
Raymond Firth Article on importance of marae in contemporary Māori communities, 1966 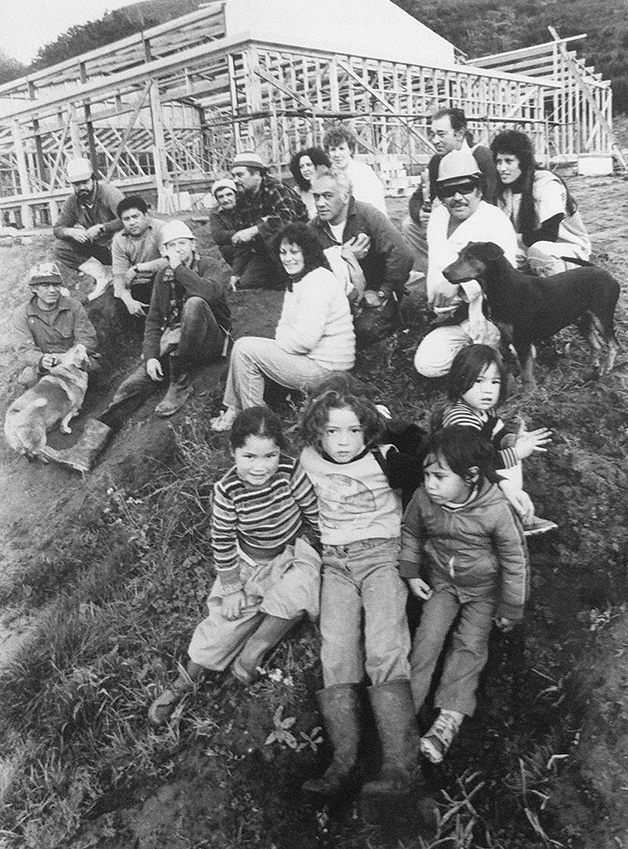 The Waitaha Hall was surely the building that noted ethnologist Raymond Firth referred to in a 1966 article on the importance of marae in contemporary Māori communities, saying, “far to the south in the town of Bluff … in difficult circumstances, a small Māori community descended from Ngāi Tahu, Ngāti Māmoe, and Waitaha tribes, combined to institute an assembly hall with a courtyard to serve as a centre for the practice of Māori songs and the entertainment of visitors.” Although the Waitaha Hall mostly fulfilled the needs of its community, its restrictive size and layout – and age – meant that by the late 1970s discussions were well underway within the then Awarua Māori Committee regarding the establishment of a marae proper in Bluff. Matters were brought to a head in early September 1981 when the Waitaha Hall was destroyed by fire.

Committee minutes from the first meeting held after the fire note that,“[i]t was decided by all present that we would rebuild Waitaha on marae land in Bradshaw St.” While this was the work of many, the committee chairperson, George Ryan, and its Secretary, Norman Bradshaw’s daughter, Maria Tini, played particularly vital roles. According to the latter, the trustees of Tarere ki Whenua Uta supported the committee’s plan to develop the Bradshaw Street site, with the proviso that the surviving house be retained. 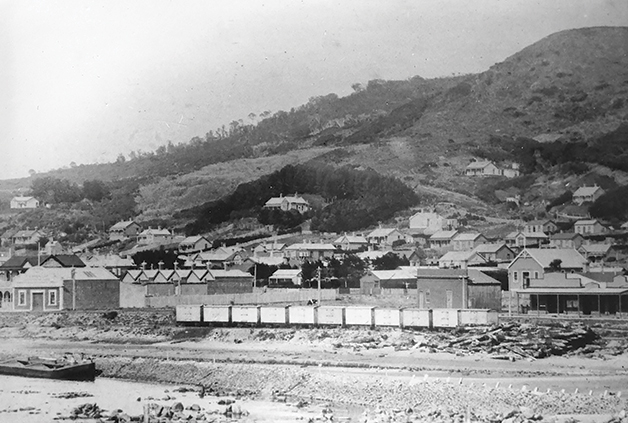 Waitaha Hall on the right, behind building with verandah.

The replacement building, which was a large wharekai, began with the Awarua Māori Committee acquiring ownership of a paper road between Elizabeth and Bann streets from the Bluff Borough Council. This block of land was amalgamated with the existing reserve grounds and vested in the committee in August 1983. The estimated cost of the wharekai was $200,000, but this figure was reduced to $105,000 as a result of voluntary labour, including many mātāwaka who “understood the value of a marae”, as Tini’s sister and long-serving chairperson of Awarua Rūnaka, Hana Morgan, later said.

After first being knocked back by the Department of Māori Affairs for a $60,000 marae subsidy, the committee eventually snared nearly $80,000. Iwi connections proved vital – both the MP for Awarua, Rex Austin, and the Minister of Māori Affairs, Ben Couch, were Kāi Tahu. In announcing the subsidy, Austin told The Southland Times that the committee had been “tremendously energetic” and worked with “great determination.” Truer words were never spoken. In 1998, Tini humorously recalled that she and four others travelled to Wellington to visit Austin at his parliamentary office and did not leave until he had sourced funding for the project. 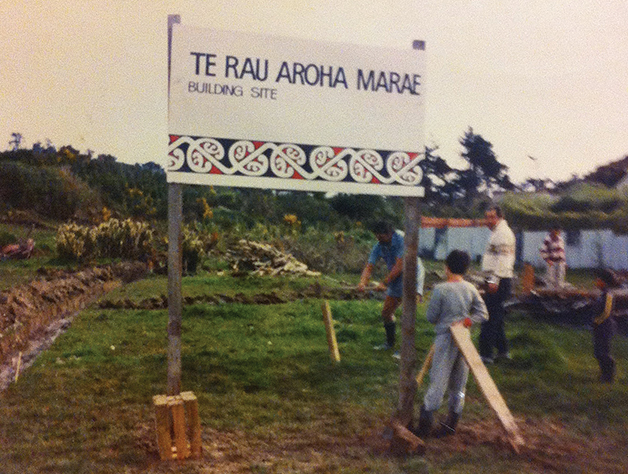 Invercargill’s Mollison and Associates designed the wharekai and Bob Rudolph supervised the build. The foundations were laid in February 1984, the frame was substantially complete by late May, and construction was mostly finished by Christmas. A progress report in The Southland Times noted that a “relaxed and friendly atmosphere is evident on site with the presence of whole families, including household pets, and in the community a feeling of togetherness had been generated.”

The whakatuwherataka for Te Rau Aroha took place on 9 February 1985 and was declared open, fittingly, by local MP, Rex Austin, a staunch supporter of the project: “a positive move towards the preservation of our inheritance.”

In 1982 the Awarua Māori Committee had moved that the new wharekai be named Waitaha in memory of its predecessor. However, it was ultimately named Te Rau Aroha. This was the name of the 1938 Ford canteen truck used by the 28th Māori Battalion during World War II, and then, in the 1950s, a kapa haka group in Bluff overseen by Norman Bradshaw and his wife Ngawara (née Kereti; nō Te Arawa). Te Rau Aroha is also the name of the wharekai on Te Pākira Marae at Whakarewarewa in Rotorua. Bluff’s Te Rau Aroha therefore speaks to the cultural force of the Māori Battalion, “in the restoration of Māori assertiveness and collective confidence in the post-World War II environment,” as Upoko o Awarua Rūnaka, Sir Tipene O’Regan says. But equally, it also owes much to the critical cultural role his Aunty Ngawara played within Awarua before her premature death, and the enduring connections established between Ngāti Wāhiao and Awarua as a result of her marriage. 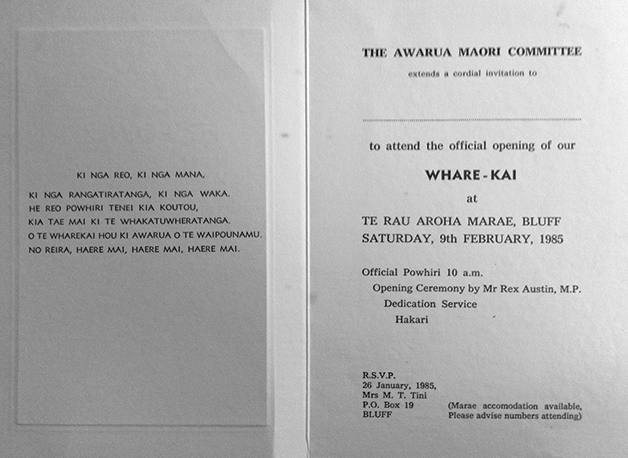 Invitation to the opening of Te Rau Aroha Wharekai, 1985.

The whakatuwherataka for Te Rau Aroha took place on 9 February 1985 and was declared open, fittingly, by local MP, Rex Austin, a staunch supporter of the project. The opening attracted approximately 2000 people and as The Southland Times wrote, “in keeping with its potential importance in the community, the ceremony was more than a hasty ribbon-snipping affair. It took four hours to say what needed to be said … almost all … in Māori.” This bore out Austin’s own comment that the marae was “a positive move towards the preservation of our inheritance.”

Charting the transition from Bluff’s first “Māori House” to Tahu Pōtiki highlights big changes in Kāi Tahu life: from Awarua as a marginal southern Māori settlement and now a key heartland community, and the transition of te reo Māori as the community’s first language to a state of near extinction, followed by the thrust towards revitalisation.

In 1992 a large ablution block was added to the wharekai, and after Te Rūnaka o Awarua Charitable Trust was constituted in 1994, the Trust assumed responsibility for the Te Rau Aroha Marae complex. In 1995 the rūnaka purchased a neighbouring house at 12 Bradshaw Street that was owned by Kelly and Mabel Metzger from the 1920s until the 1970s. Coincidentally, Kelly’s relation, Tiny Metzger, an active rūnaka member well-known for his commitment to te mahi pōhā, led its repair. This building now houses rūnaka administrative staff. The rūnaka also acquired further council-owned land adjacent to Te Rau Aroha in 1997. This provided space for the wharerau-inspired wharenui Tahu Pōtiki which was erected in 2000, and, a few years later, a bilingual early childhood centre. In the lead-up to fitting out the wharenui, Te Rau Aroha was also adorned with tukutuku, whakairo, and kōwhaiwhai designed to reflect the area’s mahika kai, especially te hopu tītī, the seasonal muttonbird harvest. 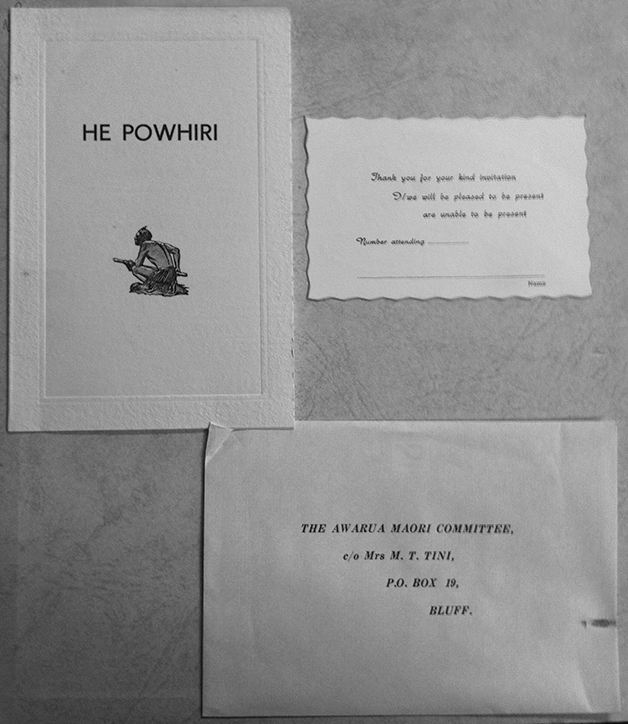 Charting the transition from Bluff’s first “Māori House” to Tahu Pōtiki highlights big changes in Kāi Tahu life: from Awarua as a marginal southern Māori settlement and now a key heartland community, and the transition of te reo Māori as the community’s first language to a state of near extinction, followed by the thrust towards revitalisation. However, the various whare outlined in this article also draw attention to continuities. These include the centrality of mahika kai, mainly sea-based, and seasonal mobility in southern Kāi Tahu households – two things made especially visible during the annual tītī harvest. Above all else though, these whare stand as testament to the enduring relevance of the social functions they enable and the resilience of southern Kāi Tahu families and our coastal culture.

Bluff-raised Dr Michael Stevens (nō Kāi Tahu) is a Senior Lecturer in Māori History based in the Department of History and Art History at the University of Otago. In 2013, with support from Awarua Rūnaka, he was awarded a highly competitive three-year Marsden Fast-Start research grant by the Royal Society of New Zealand to research and write a history of Bluff. This article draws on work from that project, the main output of which is a book, Between Local and Global: A World History of Bluff, to be published by Bridget Williams Books in 2018.