Kai
Cooking Out Back 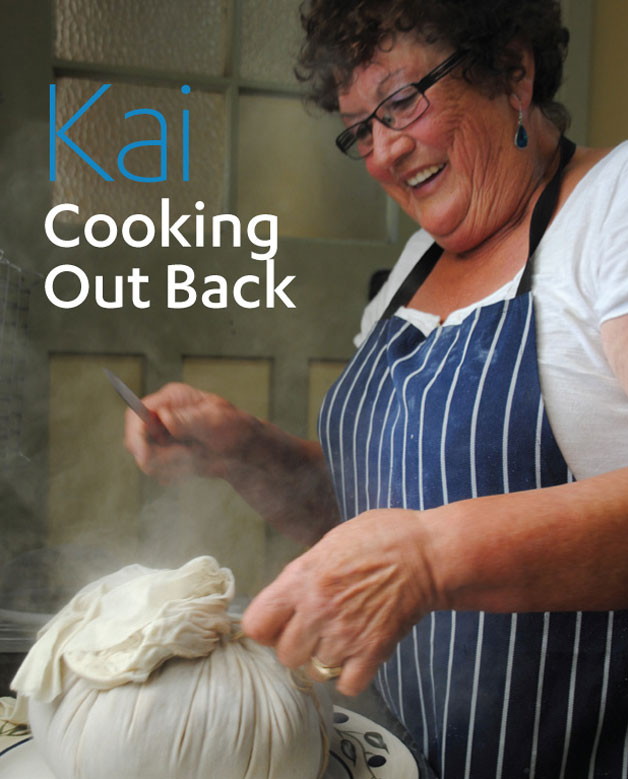 Cooking for shearing gangs in the Australian Outback for two years gave Angela Timms all the training she needed to cook for big families and hui. She talks to kaituhituhi Adrienne Rewi about her passion for food and her famous plum duff.

“Come join our shearing run,” was the call. And for two years, Angela Timms and her family journeyed through the Australian outback to places many people never get to see.

“It was the best time of our 20 years in Australia,” says Angela (Ngāi Tahu – Ngāti Kurī).

The shearing run belonged to husband “Major” Keppa’s sister and brother-in-law, with Angela joining as the cook. “I cooked in everything from tin sheds to tiny, 100-year-old Chinese miners’ huts. I was often cooking for 30 people and it taught me how to make ingredients go a long way. I had to cook with whatever I had to hand, because sometimes the nearest shops were 250 km away.

“Whatever was in our shed usually had to last three or four weeks, and we often had no fridge. So it was powdered milk and to freshen up the bread, I’d dampen it down and put it in the oven for a bit. It was better than stale bread.”

Angela also became an expert at cooking mutton – in curries, patties, stews, roasts, boiled – and wildlife that the shearers shot along the way. 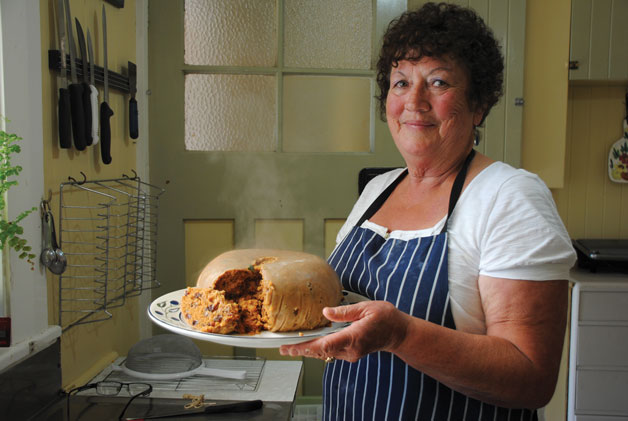 “They’d bring in rabbits and I’d have to skin, stuff and cook them; and one time they turned up with a huge king crab. I didn’t have a pot big enough, so we had to cut it in half and cook it in two pots.”

“I love cooking at the marae, and it’s all about good planning. I was brought up in that kind of environment at Tuahiwi. My mother, Whitu Cox, was a great cook and everyone at the pā loved her sponges. She had a family of nine and she cooked everything on a coal range.

“Mum was definitely my biggest influence. When I was a kid she let me make Cornish pasties and pies. She taught me how to make good pastry and big pies – and how to cook whitebait and tītī.”

With all her experience cooking, Angela became one of the cooks at Takahanga Marae in Kaikōura four years ago – usually helped by Major and daughter Vikki. She says the key to success lies in being organised.

One of Angela’s signature dishes is plum duff. She was given the traditional recipe by her late mother-in-law, Bunty Timms. She cooked her first one when she was 18 and she’s been cooking plum duff ever since.

Plum duff has endured as a Timms family favourite. Bunty cooked it every Sunday for her family of ten children, plus those she had adopted.

“She made a huge plum duff every Sunday and we ate it after the roast dinner. She’d serve it with custard and cream, and any leftovers were eaten the next day, sliced and buttered like a loaf,” says Angela.

“The recipe goes back about a hundred years. It’s been handed down through the family ever since.”

Plum duff has its origins in medieval England and was introduced to New Zealand Māori by early Pākehā settlers. It takes the name “plum” from pre-Victorian times, when the word “plum” referred to raisins. It’s become a staple in many Kiwi households over several generations, and is still an iconic marae favourite on the hui and whānau kai table.

For Angela, it’s a good easy recipe that goes a long way.

“Everyone loves a good steam pudding and this one is versatile.

I often add different dried fruits or spices for a change,” she says.

The kitchen is starting to fog up as steam billows through the room. On the stove, a pot lid tinkles, and Angela announces it’s time to take out the plum duff. After donning oven gloves she lifts the plump, steaming mound out of the boiling water and lowers it onto a plate. With a snip of her scissors, the string is cut and with the cloth carefully eased back. The sweet, sweet smell of caramelised sugar, spice and fruit wafts into the room.

Always the perfectionist, Angela inspects her pudding carefully before cautiously declaring it ready. She won’t say it’s a success – she leaves that to the whānau to decide.

Plum Duff Recipe
Put one cup of sugar into a pot and cook on an element until the sugar is golden brown. Add 3 cups of hot water and mix, reheating to dissolve the caramel if necessary. Leave the mixture to cool.
Sift 6 cups of self-raising flour, 2 teaspoons of mixed spice and a pinch of salt.
Add one cup of sugar and 500 grams of raisins, or dried fruit of your choice. Dried mixed fruit usually used in Christmas cakes is also good.
Make a hollow in the dry flour mix and add the cooled burnt sugar mix. Mix together to form a wet, cake-mix consistency.
Place the mixture into a pre-prepared wet calico cloth that has been dampened, dusted with flour and lowered into a bowl. When the pudding mixture is in the cloth, bring the sides of the cloth together, leaving space for the pudding to rise. Tie off with string.
Lower the pudding bag into a pot full of boiling water – it’s a good idea to sit it on a plate inside the pot, to stop it sticking. Cook for one-and-a-half to two hours.
Remove the pudding from the pot, place on a plate, and untie the calico.
Serve with custard, cream or ice cream.