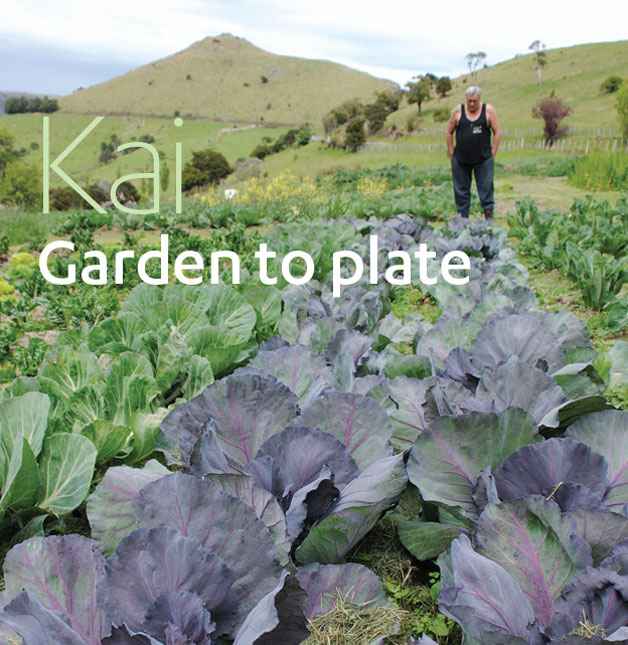 The Koukourarata māra kai is about bringing the people of the local community together with whenua and food. Kaituhituhi Adrienne Rewi reports.

The Koukourarata māra kai spreads across two plateaus – one above the other – like a giant vegetable canopy. It is a place of peace, learning and harvest; and the principle of generosity underpins its existence – evident in the small roadside koha stand that sits under the shelter of a giant gum tree.

For a donation, locals can help themselves to the garden surplus – a bunch of fresh silverbeet, a fat cabbage or a choice broccoli head. Or, if they’re after lettuces and salad vegetables, they can harvest directly from the garden, saying thank you perhaps, with a little tidying up.

Local resident Kylie Deer has her own vegetable garden but sometimes, when she runs short, she “pops up the hill” to pick from the community garden.

“The gardens are a great asset to the marae and for local families. We all go up there and pick what we need. It’s very handy and I’m happy to do a bit of weeding or digging in exchange,” she says.

The flourishing māra kai belies the fact that it was first planted out just a year ago. Established by Koukourarata Marae, it is set in a sunny, sheltered gully beside Koukourarata Stream, on land once designated for a Māori Native School that was never built. A huge range of vegetables is thriving in the all-organic conditions, including traditional favourites such as kamokamo, rīwai and kūmara.

The relationship between the land and the people has always been important to Māori. For Te Rūnanga o Koukourarata project manager Peter Ramsden (pictured), the māra kai is just another healthy step towards a healthy community. It is, he says, part of a larger picture that includes the rūnanga’s conservation efforts and native tree planting schemes around the community – all aimed at creating a community residents can take pride in.

“We’ve got a lot to offer in Koukourarata and we’re all going to be here for a long time, so let’s work together in a relaxed way to make the sort of community our whānau will be proud to come home to. The māra kai is the beginning of a journey. It’s about bringing everyone together with whenua and food and creating opportunities around the marae.” 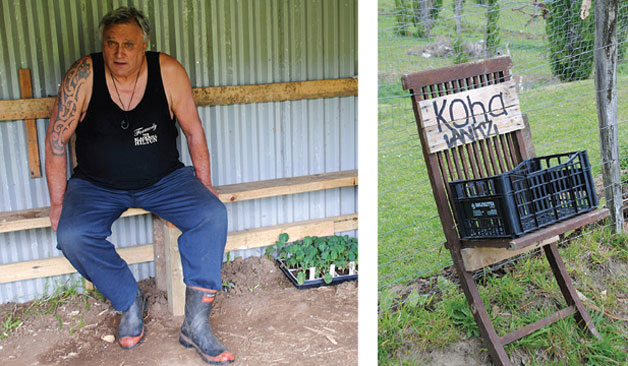 To get the project off the ground, Ramsden established a relationship with Tom Piahana and the Department of Corrections which supplies workers through its periodic detention programme. They’ve been invaluable, he says, in preparing the beds, building the garden shed and creating compost heaps. The team travels to Koukourarata for the day two or three times a week to work in the gardens.

The latest garden project involves erecting a new 15 m x 11 m tunnel house for frost-tender vegetables and rongoā plantings for medicinal use. Ramsden hopes it will be operational this summer, and while its use will be divided, he’s hoping to see a range of rongoā plants grown.

The medicinal use of herbs and trees was common to early Māori. They used over 200 plants to treat a wide range of ailments and illnesses. Kōwhai, kawakawa, koramiko, rātā, mānuka, harakeke and many others were incorporated in assorted remedies for both internal and external use. There’s been a renewed interest in rongoā in recent years, and traditional plantings at Koukourarata will provide an opportunity for both current learning and a resource for future generations.

“This bay was one big garden when I was a kid – the biggest supermarket in the world, and I’m excited about the fact we’re bringing back traditional knowledge and sharing it,” says Ramsden. “Our tamariki have the right to fresh, free vegetables. This is their tangata whenua. This is their chance to get their hands in the soil.”

Traditional organic Māori cultivation methods are being used and the soil has been enriched with horse manure, sheep manure from local shearing sheds, and seaweed from the bay. Chemical fertilisers, herbicides and pesticides are not used.

“One of our Ngāi Tahu visions for Te Matatini 2015 is to have māra kai at Tuahiwi, Taumutu and Koukourarata Marae producing organic, traditionally-grown vegetables for the celebrations. We’re very keen on that idea and I’m delighted we’re bringing things like kūmara back into the bay,” says Ramsden.

Few things come as naturally to Māori as the bringing together of friends and whanāu for hunting, gathering, cultivation, harvesting, preparing and cooking food. Ramsden has high hopes that Koukourarata’s māra kai will go a long way to building on Pākehā and Māori relationships within his community. He feels an enormous satisfaction that the gardens are already so bountiful.

“This demonstrates we can achieve real things, things of substance for our whānau and the over-riding message to everyone in our community is, ‘Come and join us. Everyone is welcome’.”