Kai
A taste for pūtakitaki 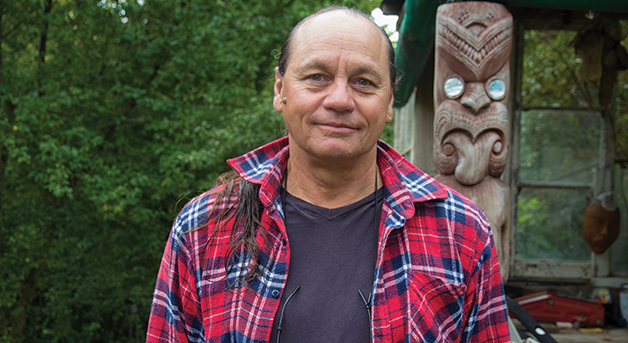 The smell of duck cooking in Rewi Couch’s small whare at Rāpaki is mouth-watering. Slow cooking is the answer, he says, as he serves up a plate of tasty dark meat. This is meat from a paradise duck or pūtakitaki.

“It took some time to figure out how to cook them,” Rewi says. “I tried roasting them but they were just too tough. I eventually realised that they needed to be cooked really slowly.”

Pūtakitaki or the paradise shelduck is New Zealand’s only shelduck, and is usually seen in pairs, except in the moulting season (December to February). Their numbers have grown as forest has been turned into pasture, and they mainly graze on grass and weeds. They can flock in large numbers during the moult, when they have traditionally been taken for food and preserved in their fat in gourds or kelp bags.

“I’m not interested in blasting ducks. This is a food resource. When you research our mahinga kai, you realise our food has often been turned into someone else’s sport. The best push is a drive … We have learnt to sit back and not rush the birds.”

Moulting shelducks become fat and flightless, and were traditionally driven from the open waters of lakes on to the shore, where they could be caught in large numbers. This got Rewi thinking – why not start a modern-day version? Armed with a temporary permit to hunt pūtakitaki, he went out on Wairewa/Lake Forsyth in his boat with his daughter Ila. Getting the birds off the water and onto land where they could be caught was harder than he had realised.

“We learnt that the birds would dive underwater and swim away when they were chased. One ran ashore and stuck its head under a tussock.”

Paradise ducks or pūtakitaki are often said to be New Zealand’s most popular game bird, but Rewi, who has hunted geese in Arnhem Land and moose and elk out on the Canadian prairie, doesn’t hunt ducks for the thrill. “I’m not interested in blasting ducks. This is a food resource. When you research our mahinga kai, you realise our food has often been turned into someone else’s sport. ”

Year by year he has refined the culling methods, learning to drive the birds towards nets on shore while not rushing in. “The best push is a drive. You have to get them off the water and on to the shore. We used to run around and fall over each other trying to get the birds. Now we’re far more relaxed and professional. We have learnt to sit back and not rush the birds.”

But despite that acquired expertise in both catching and cooking pūtakitaki, Rewi says there is room for more people to take part in an annual hunt.

“We do a big sweep around the lake and we’ve been taking around 30 or 40 birds each year, although I have a permit to take up to 150 birds. The problem is getting a crew together to do the cull.”

Rewi, who is probably best known as a sculptor and photographer, was brought up at Rāpaki in a time when living off the land and the sea were more common.

“Living off the foreshore was an important part of feeding the family when I was growing up, and collecting pipi and cockles was a normal part of activity. There used to be kelp on racks and pāua in the rock pools and you could go round here, never leave the reserve, and get a couple of bags of mussels and a bag of pāua.”

The family moved, first to Christchurch, and then to south Auckland when Rewi’s father Moke followed a family tradition and became a Methodist minister. Not only that, but he was the first Methodist minister to take a mission to urban Māori.

“It was a culture shock for me,” says Rewi. “I’d never seen so many Māori in my life. I’d come from Thorrington Primary into South Auckland and Manurewa High School because his rohe was from Māngere to Tuakau.”

On Sundays he would drive his father around to different services. When Rewi finished school, his mother and father moved to Taranaki, but he stayed on in South Auckland and got a job at the local freezing works. Around the same time he bought a .303 rifle and got into hunting.

At 20, he became a father, got married, and moved back home to the family house at Rāpaki, before getting a job at the freezing works in Bluff. When his grandfather George had a heart attack, Rewi moved back to help on the family farm for a while.

Then it was back to the North Island, where he bought a house in Papakura. When the freezing works closed, he bought a lunch bar in Takanini. Somewhere along the way, the first marriage didn’t work out.

In Canada, while on a family visit, he met Marilyn Shirt, a First Nation Cree, who would become his second wife. Marilyn and her brother were funded by World Vision to set up a treatment centre for alcohol-related problems in Alice Springs. Rewi joined them. The plan was to spend a couple of months there while they set up the centre, says Rewi. They spent a couple of years there.

He became a Canadian citizen by marriage and in the mid-1990s he and Marilyn lived on the Saddle Lake First Nations Reserve in Alberta, Canada. The couple have a daughter, Nepeya.

There Rewi set up a café and pizza shop and helped Marilyn develop a Cree language curriculum and an immersion pre-school.

And he hunted moose, elk, deer. He was turned off by the meat available commercially, sourced from grain-fed animals.

“I hunted lots over there. We picked our own berries. Basically I took up their mahinga kai traditions.”

There was a dark side to the prairie beauty, says Rewi. “Here we were out on the prairie among cougars, bears, ducks, all sorts of wildlife. It’s an amazing, beautiful wilderness, but you can’t drink the rainwater because of the acid rain, and the groundwater has been polluted by farming. At one stage we were warned not to eat moose because there had been a spill from a toxic waste dump.”

What he found was rather different to his childhood memories. He saw raw sewage spilling from a pipe, and since he has been back the cockle beds have died out. There has been a general degradation of the environment. After serving his time on various committees, he eventually had a meeting with Fish & Game New Zealand over his wish to hunt pūtakitaki.

“I fronted up and said, ‘I’ve always hunted, I want to get back into the tradition of hunting the ducks, and I’m coming to you for help because it has probably been at least 100 years since our people did this. You are the kaitiaki of these birds now.’”

Rewi got his test permit, and the annual cull began. “I tapped into Wairewa because I know the lake and the people, but Canterbury is riddled with small lakes where these ducks are a resource.

“In Alberta, farmers will call the reservation when they are inundated by herds of elk and ask the Cree and other First Nations iwi to go and shoot them. I can see the same kind of thing happening here.”