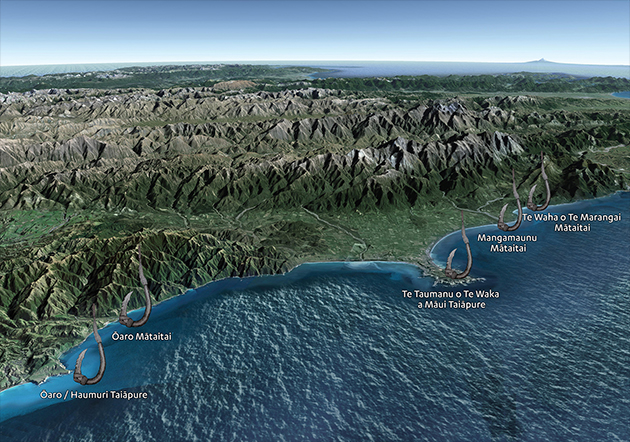 It took nine years and the wonder was that no one walked away during that time. Some say Te Korowai and the Kaikōura Marine Strategy are a blueprint for community engagement and customary management of the marine environment.

Tā Mark Solomon, chair of Te Rūnanga o Kaikōura and a member of Te Korowai, says the process was a beautiful expression of community. So what is the Kaikōura Marine Strategy and who are Te Korowai o Te Tai ō Marokura?

At its core, the legislation provides for two taiāpure, managed by committee, to provide for customary management over the traditional fishing grounds around the Kaikōura Peninsula and the Haumuri Peninsula and three mātaitai, managed by Ngāti Kurī Tangata Tiaki, at
Mangamaunu, Te Waha o te Marangai and Ōaro. The mātaitai are closed to commercial fishing but open to recreational fishing subject to any new bylaws, and taiāpure are open to all fishers subject to the new regulations that will be developed by the committee.

The objectives of these customary tools are to restore and maintain traditional fishing grounds which are significant to Ngāti Kurī and to ensure the traditional knowledge and tikanga of Ngāti Kurī are used to protect the fisheries of Te Tai ō Marokura.

Te Korowai is committed to sustaining Te Tai ō Marokura as the food basket of the Kaikōura community while ensuring prosperity for local commercial fishers and good fishing for customary and recreational fishers. It is all about using local knowledge and Ngāti Kurī tools, says Gina Solomon, the representative for Te Rūnanga o Kaikōura.

“The rūnanga had a clear vision from day one. We wanted a document that reflected our values and way of life. And I think from day one we believed we could do it. As a rūnanga we’re used to differences of opinion.”

All discussions took place at Takahanga Marae so that everyone could recognize the position Te Rūnanga o Kaikōura held and how important the coastline is to Ngāti Kurī.

Nigel Scott, principal advisor – mahinga kai for Toitū Te Whenua at Te Rūnanga o Ngāi Tahu says the customary tools were the critical part of Te Korowai strategy. “We knew that once we had the customary tools locked in, that all the other solutions would follow to complement the customary tools. This is the importance of Te Korowai from a customary fisheries management perspective – you get mātaitai/taiāpure with additional, regional measures such as significant recreational bag limit changes. All these tools acting in combination set Te Korowai apart. In most other regions of our takiwā, the customary tools sit as stand-alone tools, and they are more vulnerable to surrounding pressures.”

A major ’gain’ in the legislation is the establishment of Te Rohe o Te Whānau Puha or the Kaikōura Marine Mammal Sanctuary which will include 91km of shoreline and extend 56km offshore. It is aimed at minimising the risk of seismic surveys used in mineral and petroleum exploration.

The ‘gifts’ in the strategy include:
• A fur seal sanctuary at Ōhau Point
• The Hikurangi Marine Reserve which covers approximately 2km of shoreline and extend out to 23km offshore. It covers just over 10,000 hectares around the world-famous Kaikōura canyon off Goose Bay, south of Kaikōura township.