Whaka-Ora, Healthy Harbour – an aspirational plan to restore the cultural and ecological health of Whakaraupō (Lyttelton Harbour) – is already bringing about change after its launch in March. The plan is the result of a commitment between mana whenua and local governance bodies, and is a unique example of successful partnership and collaboration in environmental management. Nā Kim Triegaardt. 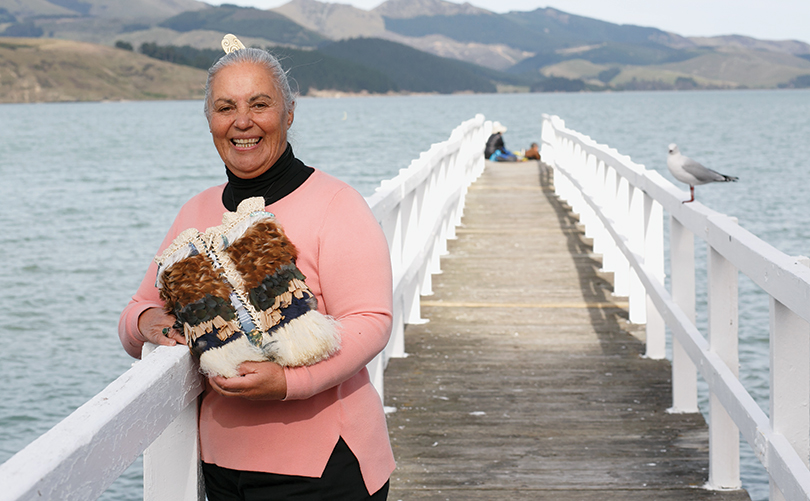 It’s often said that if you are going to have a goal, you might as well make it a great, big, hairy one. But in this case, Te Hapū o Ngāti Wheke would prefer theirs small, fat, and feathered.

Yvette Couch-Lewis, governing chair of the Whaka-Ora, Healthy Harbour project, softly strokes a layer of tītī feathers in the intricate korowai that wraps around a copy of the Whakaraupō/Lyttelton Harbour Catchment Management Plan. It is her hope that one day the tītī will return to Whakaraupō.

“Why should we not aspire to have them return?” she says. “If we follow the plan, we will create an environment that makes it favourable for them to live here. When mahinga kai is abundant and healthy for harvesting, and the community within Whakaraupō is fully engaged with the aspirations of the plan, my goals will have been achieved.”

Nearly 200 years of settlement, sediment, and stormwater have contributed to the declining health of Whakaraupō. Gone are the tītī, the flourishing raupō that were once found at the head of the harbour at Ōhinetahi, and the manaia or kōiro. You don’t see the majestic mataī or the giant kahikatea on the hillside – just two of a long list of plants that have vanished entirely or are close to it, their tenacious roots clinging to rocks deep in hidden gullies. By the early 20th century, 26 bird species had vanished from the area.

But Yvette sincerely believes the plants and birds will be back; and that when they return, it will be thanks to a multi-party arrangement to make the ecological and cultural health of the harbour a priority.

The Whaka-Ora, Healthy Harbour project is a collaboration between Te Hapū o Ngāti Wheke, Te Rūnanga o Ngāi Tahu with Tangata Tiaki, Environment Canterbury, the Christchurch City Council, and the Lyttelton Port Company. Its genesis was in the Lyttelton Port Recovery Plan, which was developed and fast-tracked through parliament after the 2011 Canterbury quake.

The Lyttelton Port Recovery Plan included a commitment by the five parties to develop a non-statutory catchment management plan for Whakaraupō, in accordance with ki uta ki tai (catchment-based management). Its aim was restore the ecological and cultural health of Whakaraupō to mahinga kai.

The Lyttelton Port Recovery Plan came into effect in 2015, and about 18 months later, Yvette took up the reins to breathe new life to the Whaka-Ora, Healthy Harbour programme.

Yvette says it was a privilege to lead the process. “I saw it as an opportunity to finally integrate our Ngāi Tahu values throughout a plan, and to uphold the integrity of the values associated with mahinga kai and ki uta ki tai.”

She says she was determined that these values would not be reduced to a paragraph in a document that would gather dust on a shelf.

“I realised that to make this work, it would be important to work within a collaborative framework built on partnerships. The governing group would have to work together and give strong leadership to the working group.

“It’s about partnerships, and people, and working together,” she says to her mokopuna as he gurgles happily on her lap.

Watching her six-month-old grandson reach for the feathers on the korowai, Yvette becomes teary as she considers the significance of the project. She has invested years of her time and energy knowing that she will never get the chance to reap the rewards; it will be Noah, the child of her child, and his children after him.

“Mō tātou, ā, mō kā uri ā muri ake nei” (For us and our children after us) is one of the three pou that influenced the decisions made throughout the Whaka-Ora, Healthy Harbour management plan.
The other two are Change-Making and Collaboration. 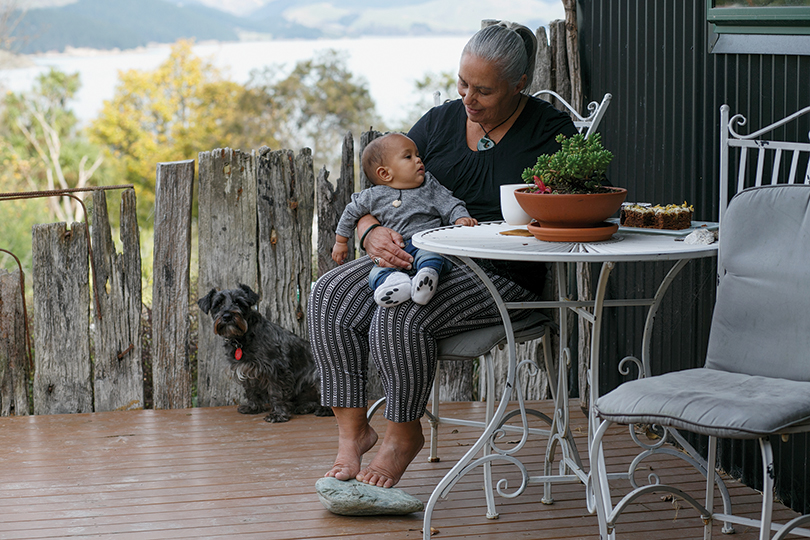 After comparing the aspirational state with the current state of the environment, the plan’s developers identified some key focus areas: erosion and sedimentation, pollution, terrestrial indigenous biodiversity, and marine indigenous biodiversity. Actions to get the programme moving have then been defined, including practical projects, research projects, monitoring programmes, changes to regulation and legislation, and education initiatives.

Yvette cautions that words on the page won’t deliver the outcome. “You have to turn the words into action and that is the challenge. We have the opportunity now to do it better by being grounded in stronger relationships. And that’s where the collaboration comes in.”

The Environmental Manager of Lyttelton Port of Christchurch, Kim Kelleher, agrees wholeheartedly. She says the port company’s commitment is to put the plan’s ethos into action through port operations. “When we rebuild wharves, we’ll build with stormwater quality in mind. We’ll be looking at how we design port infrastructure so that it mimics the natural environment.

“The port is a strategic asset to the region, so we can look at what we can do better and take real steps to make a difference.”

Kim says this includes talking to crew from visiting ships about how they manage their discharges, and making them aware that the whole harbour is a mātaitai reserve.

There is already legislation that protects the environment around Whakaraupō, but this document is a change-maker, as it takes a different approach.

“To build our future as a community, we need to move forward together,” says Yvette. “Our aspiration for the future would be that the Whaka-Ora, Healthy Harbour plan would frame and inform any new activities planned for the area.

“The key players sit on the governance board. We can say directly to the CEO of Lyttelton Port Company, or to the Mayor, ‘What steps have you taken?’ Everyone is accountable to everyone else and to the wider community – who are all watching.”

When the plan was launched in March, Environment Canterbury councillor Peter Skelton echoed the sentiment that this plan is unique. “I think in times to come this might provide an example of how we do plans in the future. ECan commits to providing the support for years to come, so the objectives of this plan can be fully realised.”

Te Ao Tūroa is the pou responsible for Ngāi Tahu mahinga kai and natural environment matters. Te Ao Tūroa General Manager Kara Edwards agrees that the plan represents a turning point in environmental planning, and is a watershed for Ngāi Tahu. “It’s reflective of the maturity of the relationships and the maturity of the country that our cultural values have been recognised to the extent they have in this document.

“It’s been built on the backs of a long line of people from current and previous generations who have never stopped advocating for our right to mahinga kai.”

Kara says that the Whaka-Ora, Healthy Harbour document sets a benchmark for future agreements with its real partnerships and collaborative efforts. “There is already significant good work underway in Whakaraupō, so we are not starting from scratch. Whaka-Ora, Healthy Harbour is going to be the framework to support and help resource what is already happening on multiple fronts.”

Christchurch Deputy Mayor and Banks Peninsula councillor Andrew Turner says as the Christchurch City Council makes its way through its Long Term Plan process, there are already significant areas in the budget that are feeding into Whaka-Ora, Healthy Harbour initiatives.

“The Lyttelton Harbour wastewater upgrade that will take wastewater from Governors Bay, Diamond Harbour, and Lyttelton via submarine and tunnel pipelines to the Christchurch wastewater treatment plant will make a significant difference, and will markedly reduce wastewater flows in the harbour.”

The Council is also looking at reducing sedimentation into the harbour by changing its activities around road cuttings. The idea is that, as well as the current projects, the Crown entities and the Port will include activities in their future work programmes that align with the pou in the document.

The wider community can contribute by planting native trees and shrubs, and removing pest plants such as broom, old man’s beard, and spartina. Residents and property developers will be asked to take steps to prevent sediment from draining off the hills into the harbour.

These changes will not only provide a positive biodiversity outcome, they will also encourage the regeneration of materials that will be culturally valuable for Te Hapū o Ngāti Wheke and the wider community.

For Yvette, the real strength of this document is the korowai (both literal and symbolic) that enfolds it. Kaimahi from Te Ao Tūroa – the environmental team within Te Rūnanga o Ngāi Tahu – worked with Ngāti Wheke whānau to create a weaving metaphor to embed Ngāi Tahu world views into the plan itself. Each section of Whaka-Ora, Healthy Harbour is likened to a different step in the making of a korowai; from harvesting and working the raw materials, to weaving fibres and feathers together to represent different parts of the harbour, creating patterns that tell the stories of the actions within the plan. In the final stage of the plan, the korowai wraps around Whakaraupō itself as a protective cloak. If the commitments of the five partners are not upheld, there will be a hole in the korowai – and a korowai with holes does not protect its wearer.

A physical korowai was woven by Ngāti Wheke weavers to represent this metaphor, and has been wrapped around the ceremonial copy signed by the five partners. The bands of feathers represent the different zones of the harbour that need safeguarding, and the korowai and its contents will act as a reminder for the five partners over the next 20 years as they take turns to be the custodians of this taonga.

“In 2040, it will be 200 years from when we started taking from the harbour without giving back in return. That’s 20 years for us to restore mahinga kai to Whakaraupō,” Yvette says.

The next eight months will be important. As the council, Crown and port company develop their future work plans, Te Hapū o Ngāti Wheke will be keeping a close eye on what these work plans contain. It’s a process that has to start somewhere, but Yvette is happy with the real commitment everyone has made to get in behind the Whaka-Ora, Healthy Harbour. Little steps, little actions by lots of people will all add up, and, as she says, “He rau ringa e oti ai” – a hundred hands will get it done.