Life without a stomach 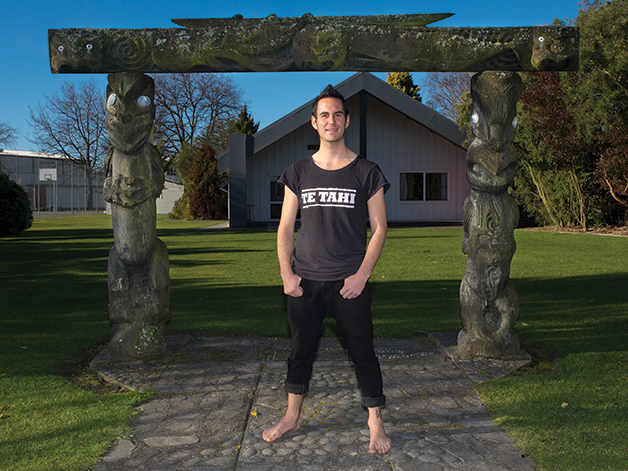 Detroit Stirling (Ngāi Tahu, Ngāti Porou, Te Whānau-ā-Apanui) had a ‘Goodbye Puku’ party the week before they removed his stomach. He drank plenty and ate KFC like there was no tomorrow.

The next week he went into hospital in Christchurch to have his stomach removed. If that sounds mind boggling, it is. A total gastrectomy operation means weight loss and often muscle loss as well. Our stomachs store and mix food until it passes into the intestine where digestion continues. Without a stomach, food passes directly from the oesophagus to the small intestine which usually develops a small bag which mimics a stomach but can’t replace it.

It was a hard choice, he says, “but at the end of the day the operation means life”.

Detroit comes from a whānau tagged with a death-dealing DNA. They are more at risk from stomach cancer than the general population due to a mutation in the CDH1 gene which has been associated with stomach cancer.

Detroit watched both his parents die from cancer. There was no way he wanted to suffer that fate. “I was 14 when dad died. Then in 2011 my older sister, Monique Stirling, was diagnosed with stomach cancer. She was pregnant and had to have an abortion because she had terminal cancer.”

When Monique was diagnosed, it opened up the idea of genetic testing for a marker that would indicate whether the whānau was more at risk of getting stomach cancer than the general population.

“We all went in and we were all really anxious. I have an older brother who is a fireman in Wellington, my older sister who has since passed, and another older sister, both teachers. We all went in for testing. I remember that day in hospital and my sister saying, ‘you better have life insurance brother, before you get genetically tested. We were laughing because I always got indigestion and was living on Quik Eze pills and they were saying, ‘oh you’re the one brother, you’ll be the one with the gene.”

Detroit tested positive and he went in to hospital to have his stomach removed, followed a week later by his sister Jasmine, and his cousin Alex a week after that. It is a simple choice in one way, Detroit says. Have the operation or die from cancer, but that doesn’t make the decision any easier.

“Me and my sister tested positive and what they do then is take you in for a biopsy and they stick a camera down you to look for signs of cancer. We were both clean and I was like, ‘oh maybe I’m fine, I’ve got a tour coming up. Maybe I could wait six months’. It was my sister on her death bed who said, ‘brother, you have to do it’.

“I was anxious, I was worried about survival. It is really weird going into hospital feeling well and waking up feeling sick.”

Detroit has since adjusted his diet, learned to live without a stomach and resumed his career playing men’s netball. Time for a plug for the man who has helped adjust his diet.

“I’ve been working with Nick Kimber, who is a nutritionist, and has been giving me advice. It can be hard. After the operation I found it really hard to gulp down water for example. I might come off court, gulp down some water and then feel nauseous. But it is amazing how the body can adapt. The lower intestine develops a bag which is starting to act as a stomach.”

Detroit has been a keen netballer since he was little, winning 13 national titles with the Canterbury men’s team who have dominated the sport in New Zealand for almost two decades. Canterbury were aiming for an 19th straight title at the national championships in Rotorua in September but were beaten 51-36 by North Harbour in the final.

Detroit has also been named in the New Zealand men’s open side for a three-test series against Australia this month. He has been in the national side for more than a decade and has been to several world cups.

He loves the opportunity but says men’s netball misses out on funding, despite playing a fast, physical, high-action version of the sport. ”When I see what the women get… wow. My dream is that one day the men will have a professional league like the women do.”