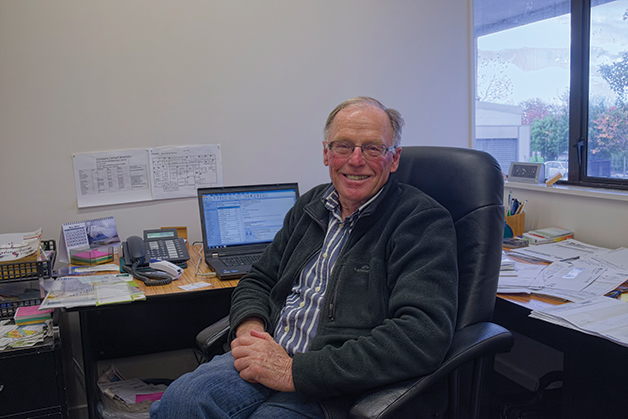 The office is small and unassuming. Down the corridor, someone is conducting a conversation in Japanese. The business card simply says Dr Graham Kitson, Relationship Director. Nothing here to suggest that the man sitting in front of me helped kept Te Kerēme on track in the 1990s.

However it was Dr Graham Kitson’s introduction of Tipene O’Regan to Japanese businessman and philanthropist Masashi Yamada that enabled a lifeline to be extended to Ngāi Tahu while the tribe waited for the result of its Waitangi Tribunal hearings. It came in in the form of a series of loans which enabled the tribe to continue with Te Kerēme.

Following the settlement with the Crown, Mr Yamada would extend similar largesse in gifting a substantial fund which was used to set up the Ngāi Tahu Mātauranga Trust in 2001.

Graham, whose whakapapa is to Awarua through his father, John Clarence Kitson, says he didn’t realise at the time how important that introduction would be.

He’d had a long association with Japan, and when Mr Yamada came to New Zealand in the 1990s to check out possible business investments, Graham spent some time with him.

“I had friends in the Japanese community in Christchurch and when some people from the Yamada group of companies came out, I was asked to assist because they were looking for land to invest in. I spent a few days with them in Wānaka, the Marlborough Sounds, and Auckland.

“They eventually decided to invest in a project in the Marlborough Sounds, but they struggled to get a resource consent. The chairman Mr Yamada himself came out – he came from a city in the north-east of Japan called Sendai and on his mother’s side had an Ainu background, so he has a really strong understanding of issues for indigenous people.

“We got chatting and he asked me if I would make an introduction to Tipene, who I didn’t know at that stage. This was 1990 and the claim process was a long way from being settled. I didn’t know it at the time, but the tribe had no money at that stage. I flew to Wellington and went to see Tipene in Bidwill Street and we sat down for a chat.”

Within three weeks, a couple of business class air tickets arrived and the pair were en route to Japan where they spent several days in Tokyo, visited Mr Yamada, and secured a loan. As a result of the trip, Mr Yamada set up a company in New Zealand called Rimu Projects, with Graham Kitson as managing director.

One project was a joint fishing venture with Ngāi Tahu Fisheries which involved bringing a boat out from Alaska. Takaroa Fisheries, as the joint venture was called, ultimately wasn’t successful.

In 2001, Graham returned to Japan with Tā Tipene and Mark Solomon to repay the balance of the tribe’s debt to Mr Yamada, who insisted the money be used to set up an educational fund. The Ngāi Tahu Mātauranga Trust was established in 2001 to provide and promote educational opportunities for the benefit of Ngāi Tahu whānui, and supports the Yamada-O’Regan Scholarships.

Tā Tipene says the intervention of Mr Yamada thanks to that introduction was timely. “It’s not widely understood just how pōhara we were getting through the latter part of the Tribunal hearings and in the early days of negotiations. Our bankers of many years were shutting the door on us and no other bankers would touch us. In those days there were none of the Treaty funding structures that there are now. Until the fisheries income started flowing in the early 1990s,  we were in a truly perilous position. The Yamada funding of our various ventures made it possible to continue the struggle. He made our future possible.”

Graham Kitson was brought up in Invercargill, aware of his tītī-harvester cousins, but kept firmly on a Pākehā track by his mother. That would change later in life.

“As a family we didn’t have much to do with our Ngāi Tahu side. My cousins always went down to the Tītī Islands and dad, who was brought up in Bluff, was always first on the wharf when they came back. But there was a dichotomy in my family relationships. My mother was a strait-laced Presbyterian, and from an early age I was taught to be embarrassed by my Māori side. That was something I later felt guilty about, and I think it was the stimulus for a lot of what I accomplished later on.”

Graham became head prefect at Southland Boys’ High School, while pursuing a passion for cricket. He must have been pretty handy – he played for the school’s 1st XI for four years, and later represented Southland. That love of cricket took him to the University of Otago for a couple of years. “Then I decided there was probably a bit more to life than cricket,” he says of that time. Next he went to Lincoln University, where he graduated in 1969 with a Master’s Degree in Horticultural Science with Honours in Agricultural Economics.

It was around then that he began to pursue a passion in all things Japanese, including learning the language and applying for jobs in Japan. It just seemed like the right time to develop an interest in Japan, given New Zealand’s move away from the apron strings of Britain and increasing focus on Asia. Also, his brother Len was a doctor in Japan.

Graham eventually landed a placement for a year at Sophia University, a highly-regarded private university in Tokyo. With his wife Nui and three children, Michael, Gregory, and Andrew, he packed up and headed for Japan.

“It was 1971 and Andrew was six weeks old at the time. Gregory and Michael were four and six, or something like that. We lived in Yokohama and I commuted to the university where I taught economics. I used that period to study Japanese business systems, and to try to understand the trade relationship between New Zealand and Japan.

“The family stayed with me for about six months, and then I stayed on with a Japanese family. It was an amazing experience. I was partially funded by Lincoln University and when I got back here, I did a lot of Japan-related research projects for the Economic Research Unit, many of which involved further travel to Japan.”

Graham believes Māori are New Zealand’s greatest undervalued resource [and] sees the Māori economy continuing to grow and succeed, based on the inter-generational view of iwi.

Graham would go on to run short courses at Lincoln for business people interested in trading in Japan. He returned with his family for another year in Japan in 1976, and spent two years with the Asian Development Bank in Manila before setting up his own consultancy in 1980 to facilitate trade in Japan for New Zealand companies.

Eventually an opportunity arose to set up a manufacturing company which made commercial quantities of roux – a mix of flour and butter used in various food preparations and restaurants. The product was sold to food manufacturers in Japan.

Graham has spent his working life mixing science and business, and believes New Zealand should add value to its food products to be successful trading on a world stage. He also believes Māori are New Zealand’s greatest undervalued resource.

He was been involved with the former Foundation for Research, Science and Technology for many years, and chaired a committee set up to fund Māori collectives.

“I really loved that as I could get out and talk to people. That’s where my views about the underutilisation of people as a resource were affirmed, through that experience.”

Graham has until recently been a board member of the Lincoln University-based National Centre for Advanced Bio-Protection Technologies.

He is a trustee of the Ngāi Tahu Mātauranga Trust, and is heartened by the calibre of scholarship applicants over the years. “The thing that surprised me was the quality of people coming through. It was set up initially to provide assistance for underprivileged families, but it is hard to find them now. I’ve been encouraging them to set up an alumni group. This can become a self-supporting cycle of achievement, and I think we’re making a bit of headway on that.”

Graham sees the Māori economy continuing to grow and succeed, based on the inter-generational view of iwi.

However the Christchurch earthquakes derailed his own business. Hi Tech Foods had developed a profitable business making and exporting sauces and stock, but it came to a crashing halt after the September 2010 earthquake, and the company went into receivership.

The earthquake ruined a critical piece of plant used to make veal stock, which took out around one third of the company’s revenue, Graham says. A major Japanese customer went elsewhere to source a similar product.

“We hoped insurance would get us through and we battled like hell to try to get through, but we just couldn’t make it. The company was bought by a listed Japanese company, Kuze Co, through its subsidiary, Kisco Foods. Kisco had been a major customer of Hi Tech for around eight years, Graham says.

“Kisco showed great commitment by investing in this business two months after the February earthquake. They have really looked after me.”

While Kisco now owns the business assets of the food manufacturing operation, Graham managed to hang on to the manufacturing site. However, he was forced to sell a retirement section at Wānaka and a lifestyle block near Lincoln, and he and his wife have lived in a caravan for the past two years while having a small house built on a son’s lifestyle block.

Graham turns 77 this year, and this month will return to Tokyo with Tā Mark Solomon and Tā Tipene O’Regan, to call on Yamada. He seems remarkably sanguine about the turns his life has taken.
“Any experience has to be enriching,” he says with a smile.