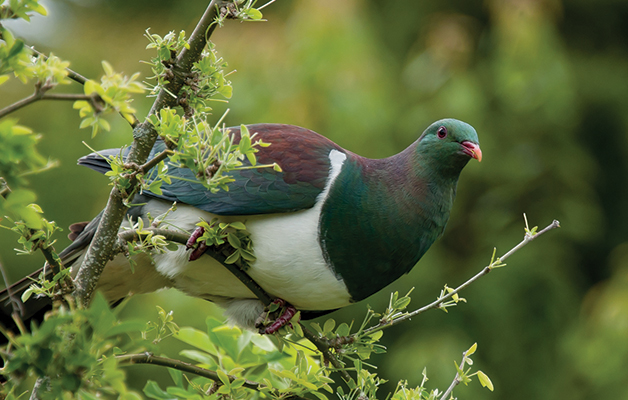 When Ngāpuhi leader Raneira (Sonny) Tau was caught with five dead kererū at Invercargill Airport, it set off a nationwide media storm which highlighted the rift between indigenous rights and conservationists. But what did they think at Ōraka Aparima Rūnaka? After all the alleged crime took place in their takiwā. Kaituhi Mark Revington reports.

For Ōraka Aparima Rūnaka it began with an email from DOC (the Department of Conservation). In reality, the kererū saga had begun much earlier when Sonny Tau, chair of Te Rūnanga Ā Iwi o Ngāpuhi, was stopped at Invercargill Airport with five dead kereru when the police and DOC, acting on a tip off, searched his bags.

The ensuing saga also raises questions about the management of taonga species and the relationship between the Crown and Ngāi Tahu. In the Ngāi Tahu Claims Settlement Act 1998 the Crown acknowledges “the cultural, spiritual, historical and traditional association of Ngāi Tahu with the Taonga species listed in the Act.”

In some areas there seems to be a recognition of Ngāi Tahu as tangata whenua and an equal partner. In others, it is almost as if the tribe is a junior partner, not to be trusted.

Ōraka Aparima Rūnaka chair Sandra Cook (Ngāi Tahu) says she was sitting at home minding her own business when the email came. “It was someone in DOC saying someone of Ngāpuhi descent had been caught in possession of five kererū and they go through some of the detail,” says Sandra.

“DOC would not tell us who it was. Before long the kūmara vine was active and we found out it was Sonny. We were annoyed we had to find out from someone else.”

Following a DOC investigation Sonny Tau was charged with killing or hunting a protected species and unlawfully being in possession of protected wildlife.

He appeared in the Invercargill District Court and admitted possessing dead kererū but denied hunting or killing them. Ōraka Aparima were left with many questions at the approach of DOC . “We thought this was a partnership,” says Sandra. “A DOC compliance officer wanted to talk to me urgently as part of the investigation. I managed to round up a few members of the executive committee and kāhui kaumātua and it’s fair to say the meeting probably didn’t go the way he expected.

“He explained things a bit further and talked about the person who had dobbed Sonny in but wouldn’t tell us anything about that person . His key focus was on ensuring that no one at Ōraka Aparima had “authorised” the taking of the birds. But we had a different focus. One of our kaumātua said, ‘So you’ve been watching this man on a number of occasions when he came down here and eventually you caught him with the birds. What would you have done if it was kākāpō. Would you have sat back waited for the carcases to turn up at the airport?’

“So for us this also became about the value which DOC places on these species. Their main concern was a prosecution and our main concern was, had we known this sort of activity was happening in our takiwā, we would have fronted Sonny before the birds were taken. In our view, prevention would be better than the proposed cure.

“At Ōraka Aparima we constantly walk the talk between conservation and customary harvest. The rūnaka has been actively involved in protecting species, especially kiwi, weka, takahe, tīeke (saddleback), kākāpō and some galaxids or native freshwater fish species. At the same time the name of our marae, Takutai o Te Tītī is about the identity of Ōraka Aparima and the relationship of rūnaka members with the Tītī Islands and harvest of tītī as a taonga species.

“Kererū are also a taonga species but we don’t harvest them anymore. Not because the law says we shouldn’t, but because there aren’t enough of them,” Sandra says. “We need to look at why the numbers are down and do something about it. Predators and loss of habitat has had a far greater impact on kererū numbers than harvesting by iwi.”

In this case the Crown seemed hell-bent on pursuing a prosecution, she says.

“We’re not in the business of seeing our people prosecuted although if necessary we will. If I knew someone was taking undersize pāua, would I wait until they took it and then ring the fisheries guy or would I try and stop them?

“There are a small number of our people who think it is ok to take kererū and so we want to speak to them about that. If I had my way we would have a rāhui and it would be for us to put on and to lift but again, but this is not the unanimous view of my rūnanga at this time.”

When Sonny and a contingent from Ngāpuhi came down to Takutai o Te Tītī to meet with Ōraka Aparima, “it was quite a big thing for a little rūnaka like ours”, Sandra says.

“At first our people were very angry at Sonny and wanted him to come down and explain himself. Sonny by this time was working out that he needed to put things right with us and the two things merged and we agreed to meet.

“So they came down for a hui and two things shone through on the day. One was Aunty Jane saying, ‘All I want is for some good to come out of it. What you did was wrong but we need to have more education around not taking these birds. We dream of the day when they will be plentiful enough to take them.’

“I don’t know when that day will come. The other thing was the tremendous impact this incident has already had on Sonny and his wife. The media and others had turned this from a prosecution into a persecution and that had a big impact on my rūnaka on the day. So we accepted his apology and his explanation of how he came into possession of the kererū. We also accepted a very special taonga in the form of a beautifully carved tooth from a sperm whale ”

Since charges were laid, Sonny Tau has stepped aside from his role as chair of Tuhoronuku, the board leading treaty negotiations for Ngāpuhi.

The case also raises questions about the rift between conservationists, and Māori who have argued for more than 100 years that cultural harvesting of kererū can be sustainable.

In the context of Wai 262, Māori have claimed that the Treaty of Waitangi guaranteed them the right to harvest kererū, and that the Crown has denied that right and violated the Treaty.

A report produced by James Feldman for the Waitangi Tribunal in 2001 makes clear the ongoing rift between Māori, who saw kererū as a food source, sport hunters, characterised by the acclimatisation societies, who saw the kererū as one of the few native birds suitable for recreational hunting, and conservationists who wanted a complete ban on the killing of kererū.

Te Rangi Hīroa, also known as Sir Peter Henry Buck, called the sporting hunter instinct the greatest threat there was to wildlife in the country.

“These sporting proclivities of the Englishman are so excessive that when he wants to do anything of a special nature that will give him special pleasure he will say to his friend, ‘Let us go out and kill something.’ The attitude taken up by the Maori race in this country in that respect was totally different. The Maori never killed for sport; he killed for the pot straight out, and he never took more than he could use. All the birds the Maori killed or snared he was able to make use of by preserving, and there was not waste.”

He was generalising for effect but by 1922, it was illegal to kill kererū. Feldman’s report shows how Crown policy restricting demands for access to kererū began in 1864 when Parliament passed the Wild Birds Protection Act.

“The 1864 Act and other early legislation most likely had little effect on Maori hunting of kererū,” writes Feldman. “ But these laws provided the building blocks for a series of amendments and laws, rules and regulations that piled up over the next 60 years. By 1922, Maori could not legally kill the kererū.”

He has also been involved in customary fisheries, both as a practitioner and a former Fisheries Protection Officer. “For us as Kāi Tahu, hunting and gathering is in our blood,” he says. “It’s in our DNA.”

Joe believes customary or cultural harvest is a no-brainer if a species can sustain itself, “To me it is common sense if a particular stock is in abundance, then why can’t it be harvested in a sustainable manner? There are mechanisms that can be put in place to monitor and manage customary or cultural harvesting. I’m not just talking about the law. There is also a place for lore. ‘I’ve been brought up to believe there is a balance in everything, and that is the challenge for each and everyone one of us to identify and understand throughout our lives. What does the balance actually look like?”

He was there when Ngāpuhi came to Takutai o Te Tītī Marae. It was marae justice being served, he says. “The kererū were taken from our takiwā and we (Kāi Tahu Whānui ki Ōraka Aparima Rūnaka) are the takatā tiaki/ kaitiaki who hold manawhenua and mana moana over our takiwā. Our kāhui kaumātua had issued a request for Sonny to come to our marae and explain himself kanohi ki te kanohi — face to face — and he did. I take my hat off to Sonny for coming down and doing that.

“Kaitiakitanga is about guardianship in upholding the mana of our atua and tūpuna and the rights and authority / tikaka and practices that have been handed down from generation to generation and which we inherited as takatā tiaki/ kaitiaki today.”

Part of that is education, he says. “The fact that Sonny came to our marae was an opportunity to express how we felt. This was done under the theme ‘He Ngakau Aroha. This was the kōrero laid down by our Pae Taumata.”

Aunty Jane Davis is another who believes in cultural harvest if it is sustainable. She has been involved in species recovery all her life. The day of the apology “was a big day for us and a day of needing to be together”, she says.

As for cultural harvest. “There are limitations but if it is sustainable, then ok. I realise we live in a changing world but if we can continue to look after a resource, I would like to think we can always have a cultural harvest.”

The tribunal determined that the Government had failed to comply with its obligations under the Treaty of Waitangi to ensure that guardian relationships between Maori and their taonga (their traditional knowledge and artistic works, and their culturally significant species of flora and fauna) were acknowledged and protected. While not binding the report recommended that future laws, policies and practices acknowledge and respect those relationships.