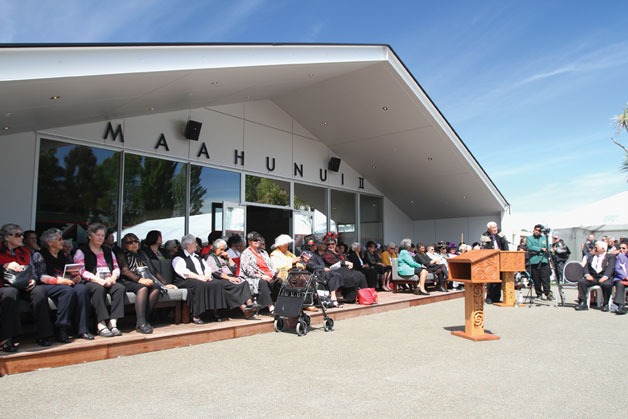 It took 10 months to build a new wharenui for Ngāi Tūāhuriri that should stand for the next seven generations. Kaituhituhi Mark Revington joins the opening march to the new centre of Tuahiwi.

On a hot sunny Saturday, manuhiri marched to the beat of Ngā Pou o te Haahi Ratana band, from Tuahiwi Urupā to the Tuahiwi Marae carpark, for the official opening of Maahunui II,

“In February we started building, 10 months later we have something very beautiful.” 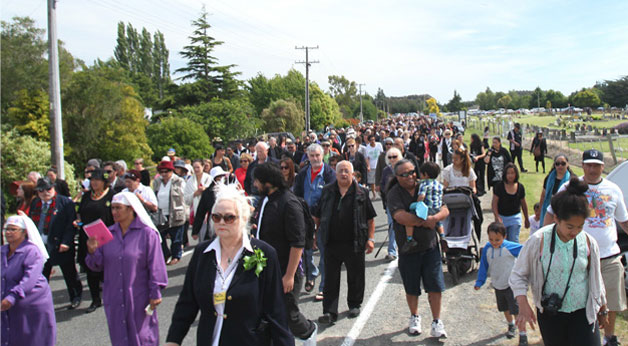 Like Te Maahunui, which was opened in in 1922 during a week-long hearing into land grievances, Maahunui II is unadorned by carvings allowing for mixed use. A survey found that 62 per cent of respondents wanted the tradition of mixed use to continue, said Tau.

The wharenui is named after the waka of Māui. It is seen as an inclusive name which binds all Ngāi Tahu together.

It recognizes the whole of Ngāi Tahu, says Tau. That is why it doesn’t have an ancestral name like a whare tipuna. It is the canoe of Māui and all Ngāi Tahu whānui fit in it.

Maahunui II is about a collaborative sharing environment, says Arihia Bennett, chair of the marae development committee. “It is a gift to future generations.”

“This place was actually a tuku aroha from the Teihoka, Te Aika and Solomon families,” Tau told TE KARAKA during the final hui for ‘The Hall’ last year. “It was given as a place for our hapū. The hall played an important part in hapū activities. But more importantly it involved the community, because that was the purpose of the original gift.” 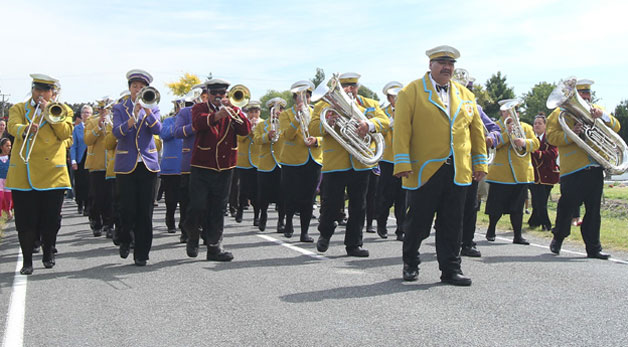 Ngāi Tūāhuriri and Tuahiwi have always played an important role for Ngāi Tahu. The marae has been the scene of many major meetings, hearings of the Land Court and hearings of the Trust Board.

The building of the new wharenui continues a marae renaissance for Ngāi Tahu that began with the opening of Maru Kaitātea on Takahanga Marae. Te Rūnanga o Ōtākou is completing new wharekai extensions. Two years ago Te Hapū o Ngāti Wheke opened a beautiful $2.7 million wharenui called Wheke at Rāpaki. It is a stunning blend of contemporary design and traditional elements.