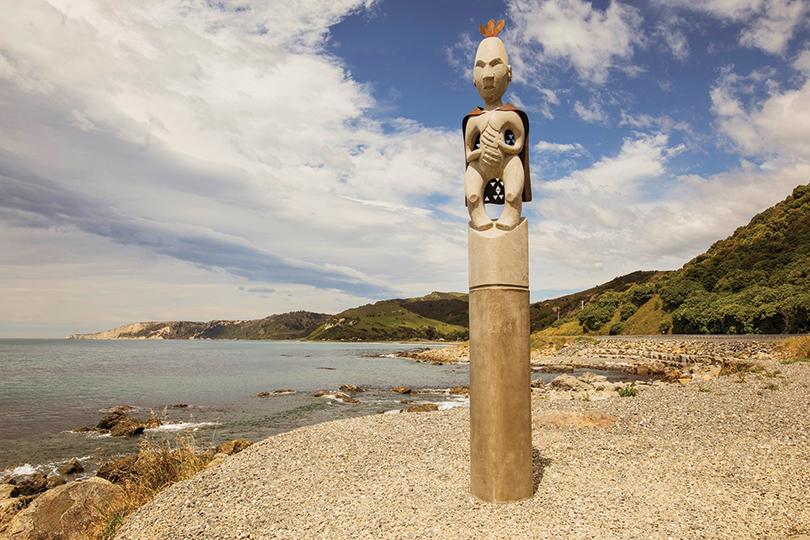 Hinekura pou at Ōmihi, facing the ancient pā site as you drive north.

Pūrākau and whakapapa. Embedded in the landscape, brought to life once more with transmission through whakairo and mahi toi in ways to fit our modern context. The large-scale artworks standing sentinel along the coastline from Ōaro to Matariki/Clarence serve as a clear reminder of the history, presence and permanency of mana whenua.

The project officially known as the Cultural Artwork Package evolved from a design hui in late 2018. The Cultural Advisory Group, with representatives from Te Rūnanga o Kaikōura, NZTA, KiwiRail and NCTIR, sketched the idea of a pouwhenua and artworks at safe stopping points along the coastline highway.

Three years later, four pouwhenua and more than 20 artworks weave together many strands of whakapapa that inform Ngāti Kurī identity, then and now. The weaver of pūrākau throughout this process has, of course, been Maurice Manawatu. Mandated by Te Rūnanga o Kaikōura to lead the project, he immediately set about lining up artists, designers and identifying tūpuna to feature. 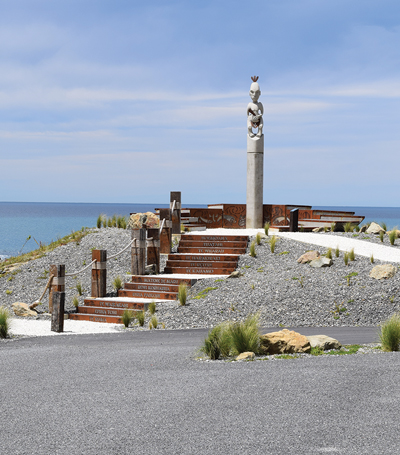 “A guy named Colin Knagg from NZTA suggested we put a pouwhenua up to celebrate the surrounding area. I just pushed it further not knowing what the budget was, and we ended up with four, two to the north and two to the south,” Maurice says.

“Riki Manuel was always going to be the lead carver. His father lived in Kaikōura and Riki went to Kaikōura High School – it was a given for me, because of that connection. I went and saw Rik and told him the plan, then he goes ‘I’ll bring Fayne Robinson on board aye?’

I was trying to play it cool, but I was sitting there jumping up and down inside because all of a sudden, we had the two big guns on the project. Two for one deal!”

Both known for pushing boundaries in their respective mahi toi, Riki and Fayne took a departure from traditional carving, instead opting for a more indestructible concrete version. The two tohunga whakairo worked closely to create castings for the concrete pouwhenua, ensuring longevity against coastal weathering.

Maurice says the tūpuna pouwhenua were easy to select – “it was just natural” – and that his process was to honour both tāne and wāhine. He also knew they needed to reference the strong whakapapa links back to the North Island.

“For example, Hinekura is Ngāti Ira. Her pou is at Ōmihi facing the ancient pā site there as you drive north.” 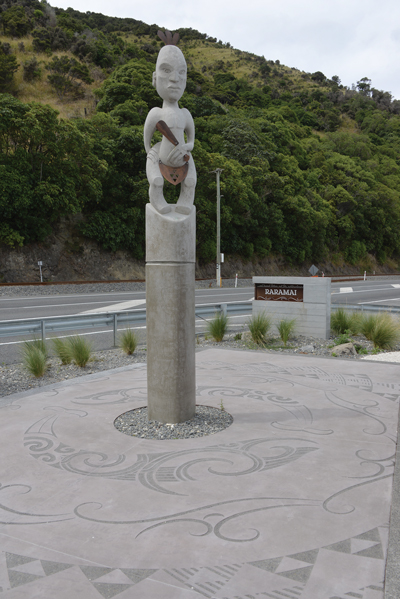 He tells of Tahu Pōtiki as he lived in Whāngārā with his brother, Whatiua Te Ramarama. The story goes, (in Ngāi Tahu circles, which many a Ngāti Porou would debate), that Whatiua Te Ramarama was betrothed to Hemo, which became glitchy as she developed an attraction for Tahu. Seeing the risky electricity, the old people told Tahu to leave. Maurice admits the story has many versions, but believes the clearest explanation for Tahu’s whereabouts is in Aropaoanui in the Wairoa district. There, he had a son named Ira Tūroto who was to become the eponymous tupuna of Ngāti Ira, an iwi which eventually migrated from Wairoa down to the Wairarapa.

“Hinekura descends from Ira Tūroto. The people at Ōmihi Pā were known as Ngāti Hinekura, after her,” Maurice says.
He also notes Ngāi Tahu have strong connections with Ngāti Ira and points to the two wives of Maru Kaitātea, as well as the Horomaka ancestress, Irakehu, as examples of this hononga.

“Our next pou is Te Ruahikihiki, whom we would mostly think of as being from Taumutu, but he actually lived in Kaikōura before migrating to Taumutu. He lived in a cave for a time and so we have his pouwhenua as close to that landmark as we could get, while facing it back towards Taumutu.”

His father was Manawa-i-Waho, who came down from Te Whanganui-a-Tara to the Marlborough Sounds and then Kaikōura at a time Maurice places at 11 generations before him. One of the first Ngāti Kurī in the takiwā, along with Maru Kaitātea (namesake of the wharenui at Takahanga Marae), he was also of chiefly status.

As a side story, when Maru Kaitātea was presented with a captured rangatira of Ngāi Tara to kill in utu for his own father’s death, he surprised many by keeping Rapa Te Kurī alive as a mōkai for his tamariki. Apparently, Maru saw this as a fate worse than death – “because each day could have been his last, and he would never know how long he had.” 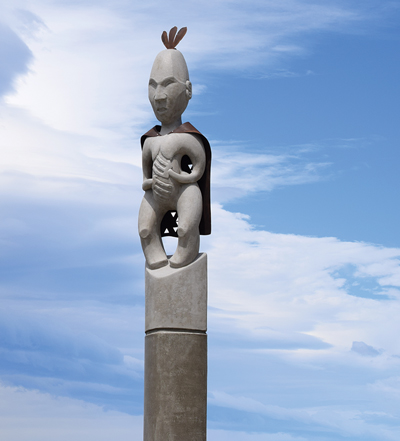 Hinerongo pou, looking up the coast towards Matariki Pā.

Maru’s great-uncle Waitai was disgusted with this perceived lack of utu and left their territory in the Marlborough Sounds, migrating south to war with Ngāti Māmoe and Waitaha for territory and resources. He took 300 men and did well, until Māmoe decisively vanquished their force leaving only four men. Only two made it back to Kaikōura where they then spoke of the abundance they had seen. Peketā Pā was a place where the younger rangatira tended to reside – “all the big land already having been taken from all the big guys” – and so young Te Ruahikihiki was at that hui where the survivors reported their adventures back to the people. It was at this time he claimed Taumutu for himself and left Kaikōura to establish a new kāinga.

“It’s a good story to tell – and it’s the connection between us and Taumutu,” Maurice says.

“Now the first pou you come to heading north of Kaikōura is Tūteurutira, an ancestor. Tūteurutira descends from Pito, the brother of Kurī, and because of this he’s not really Ngāti Kurī either.”

Tūteurutira was a young rangatira living in the Marlborough Sounds and took part in a raid on Rangitāne ki Wairau in retaliation for the assassination of Pūraho, father of Maru Kaitātea.

“We attacked the pā at the mouth of the Wairau, we took some prisoners and one of them was this woman. Tūteurutira could see by the way she carried herself that she was someone special. He put her in his waka, turned north out of the Wairau River to go back towards the Sounds and this wahine saw Te Parinui o Whiti; she started to tangi. He goes, ‘ko wai koe?’ She explained who she was to her Māmoe people, whom Rangitāne had kidnapped her from.

“He asked, ‘If I take you back will we be OK?’ And she replied:
‘to you I am nobody, but to my people I am above and they are below’. Tūteurutira took the gamble and returned her to Waipapa, north of Kaikōura, where they ended up marrying.”

Tūteurutira’s pou stands overlooking Paparoa Point, atop a staircase emblazoned with the names of his descendants. The rest area below shares kōrero of connection between Kaikōura and the East Coast of Te Ika a Māui, two lands on separate motu connected by the Hikurangi Trench beneath the sea. Artists Hori Mataki from Ariki Creative and Morgan Matthews from Kaitiaki Studios led design in the safe stopping points and illustrated this hononga between the East Coasts with the story of Paikea. There are seven formal safe stopping areas, each featuring their own kōrero.

Hinerongo, the celebrated wahine puhi who married Tūteurutira, became the natural choice for the fourth pouwhenua. She stands in her mana, a symbol of “duality, yin and yang” reflecting the balance between taha tāne and taha wahine. She is looking up the coast towards Matariki Pā where she and her lover lived, north of the Clarence River.

“Initially, I was unsure how big their [NCTIR] budget was, so I just thought I’d see how far I could get with it. We had these big concrete tunnel walls we had to do something with and I thought, ‘why not our creation story, the Ngāi Tahu version?’” 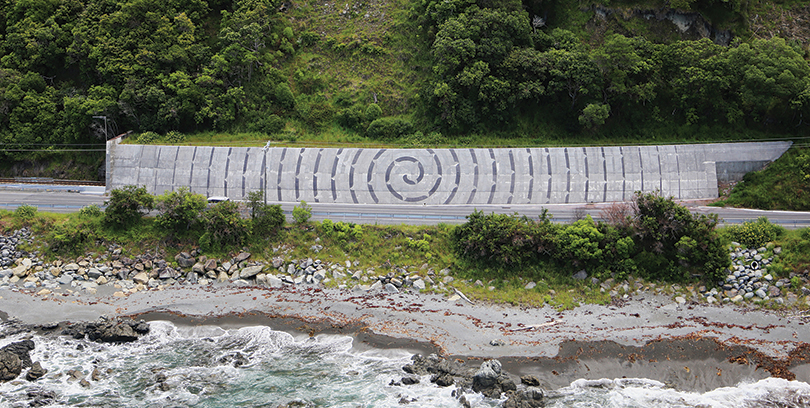 The sixth mural represents the fight between Tangaroa and Ranginui.

Maurice worked with Hori and Morgan to unpack the Ngāi Tahu creation story as told by Matiaha Tiramōrehu in 1849, mapping it across nine enormous panels. Once the artwork was designed, Christchurch based sand-blasting company Art Fe’tiche began the process of cutting large-scale stencils into a light aluminium relief which were then screwed in place against the railway tunnels.

Work took about a month for each tunnel and used a mixture of fine grit and water to vapour-blast the designs into place.

“We start right from Te Pō, Te Kore, Te Ao, Mākū and Mahoranuiātea – who had Ranginui. This section features on the first wall. And I guess where it’s different [from northern versions] is that Ranginui married Pokohārua Te Pō and she was the sister of Tangaroa, according to Matiaha. They had many children, who were all the winds, this is the second wall. From this union there were also atua who were the origin of confusion or evil.

“The third tunnel is Ranginui and Papatūānuku. Papatūānuku was actually married to Tangaroa first, she had a child and he went to take the afterbirth away. That was when she left him and went with Ranginui. 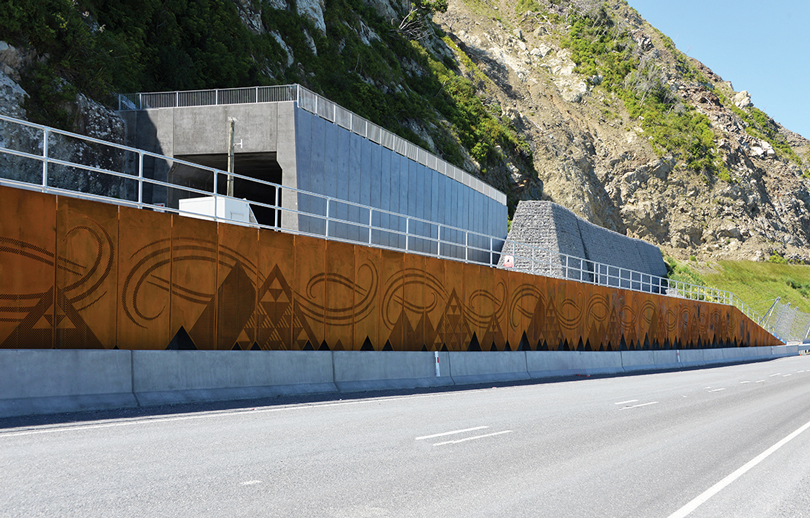 The last three murals are essentially one – these sections tell the story of the separation of Rangi and Papa, Tāne and his brother Paea.

“The fourth mural is Ranginui and his third wife, Hekehekeipapa. From this union, there were many children and one in particular is of note, Tamanuiārangi, from who we get a whakapapa line down to mankind. These are the four murals south of Kaikōura and they are all vapour-blasted into the walls.

“To the north, we have Ranginui with his fourth wife, fifth wife and sixth wife. Hotupapa, Maukuku, Tauharekiokio and from Hotupapa we have a whakapapa line down to Hotu Māmoe. Now with the sixth mural comes the fight between Tangaroa and Ranginui. Tangaroa comes back from burying the afterbirth, steps him out and they have a go.”

The last three murals are essentially one. The design was cut for these in corten steel instead of aluminium and these stencils were left fixed in place against the tunnel wall.

“These sections tell the story of the separation of Rangi and Papa, Tāne and his brother Paea, who were the two main figures in the separation, and then we have the stamping of the ground by a lot of the children of Rangi. The next wall is Rūaumoko with his story, and the last one is Tāne and how he retrieved the stars from his brother, Wehinuiamamao. So they are the three stories that feature at the end of the murals.” 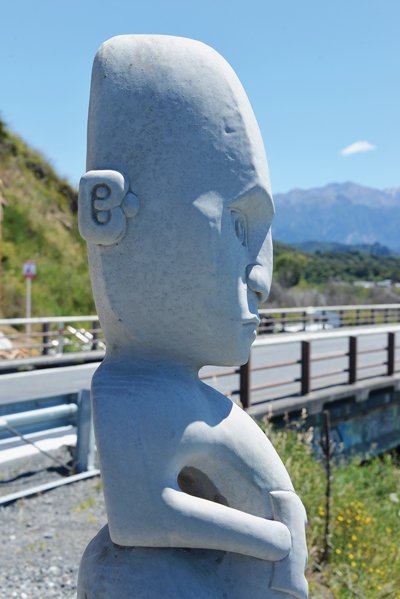 Tekoteko sit atop posts, to act as markers of places significant to Ngāti Kurī.

Tekoteko sit atop posts – several of which are along the Peketā palisade to act as markers of significant places to Ngāti Kurī. Each pouwhenua stands on a plinth two metres high with their own height of about two metres making formidable additions to the landscape. The nine tekoteko are less imposing in size, but have no less kōrero to share about the tūpuna they each represent. Te Rūnanga o Kaikōura have chosen not to make their stories public to protect the whakapapa and stories that are embedded within them.

Erasure of mana whenua from this landscape has never been possible, much as the might of colonialism has tried. This mahi toi is very much a piece of that enduring presence; to hold and stay fast to the whenua. It asks for reflection on the place Ngāti Kurī, and indeed the wider tribe Ngāi Tahu, are in now.