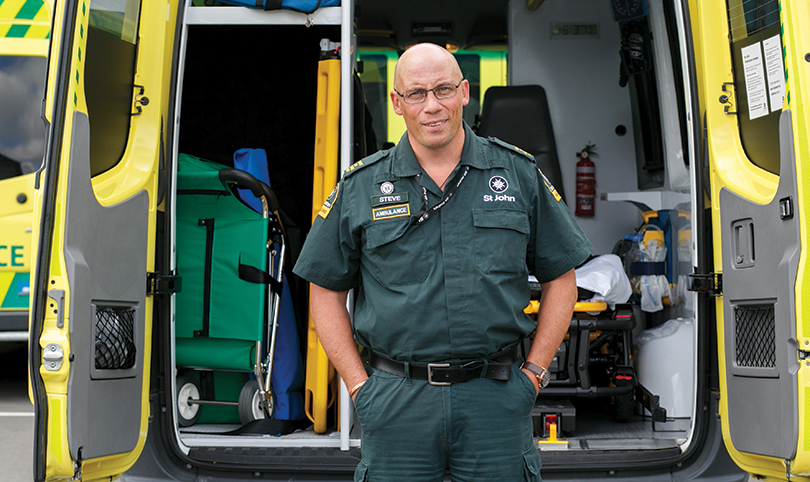 Caring for people comes naturally to Steve Pudney (Ngāi Tahu – Kāti Huirapa) who is a St John Intensive Care Paramedic – although he is quick to admit that it wasn’t the career he expected to go into.

Steve grew up in the country with his six siblings, with a passion for horses and working in the outdoors that could have become a career.

“I always had quite a big interest in horses and mustering. My father is an ex-deer culler, so we were always hunting. I ended up riding horses and working for hunting outfitters in Australia, America, and here in New Zealand for around 13 years – that work took me around the world about four times.”

It was a serendipitous encounter with an old friend that sparked Steve’s interest in changing paths to become a paramedic.

“I saw the word ‘paramedic’ written on his shoulder,” Steve says. “I didn’t even know what a paramedic was, so I asked him and from there, I started training.”

Steve started volunteering his time, and then went on to secure a full-time paid position in 2013. He is now stationed at the St John ambulance services in Rangiora.

Steve, his wife Shanelle, and their two young daughters, Indiana (6) and Alessandra (4) live in Sheffield, a small rural town about 50km from both Rangiora and Christchurch. Day-to-day life can get pretty hectic, with Steve working several 12-hour shifts each week alongside raising his girls.

“Those hours aren’t just physically demanding – they are also mentally demanding. We can get pretty buggered once we are finished. And depending on the day and how busy we are, we probably won’t see our station until the end of our shift,” Steve says.

“We no sooner leave a job then have to go to another. But helping each and every person makes it all worth it.”

Just last July, Steve attended a particularly memorable call-out, as part of the crew that saved the life of an extremely premature baby born at home at only 24 weeks.

The experience is etched in Steve’s mind, as he recalls the stormy winter’s night that baby Bella Torkington entered the world. He was working a night shift with his colleague, Olivia Burns, when they received the call-out to the unexpected homebirth.

Steve and Olivia wasted no time in getting to the home of Kyle Torkington and Rachael Sibley.

“Kyle met us at the door and as you can imagine he was pretty upset because he had been performing CPR on his daughter. He took us to Rachael who had the wee baby between her legs on a towel. Baby wasn’t breathing that well – she was only breathing six times per minute,” says Steve.

Research shows that the rate of survival for a premature baby of that gestation is low. No one was sure if she would survive, given the odds that were against her. Baby Bella weighed a tiny 805 grams, her little eyes were still fused together, and her skin was extremely delicate to touch.

“We started ventilating her very gently with a bag mask – the mask went over her whole head,” Steve says. “We couldn’t put any monitoring equipment on her, because the electrodes would have been nearly touching each other, and her skin was too fragile for the glue.

“The only way that we could monitor her heart was to listen with the stethoscope – I couldn’t count her heartbeats quick enough so I knew that it was over 100, and that dictated how much oxygen she could receive,” he says.

The team, along with fellow St John Intensive Care Paramedic Karen Connolly, noticed that Bella’s temperature had dropped. Using his ingenuity, Steve asked the crew from the Rolleston Fire Brigade, who were also in attendance, to heat up a bunch of towels and a pair of socks in the microwave.

“We cut the umbilical cord and I wrapped her in some glad-wrap and then we put her in a zip-lock bag to try and keep the warmth in, and her premature skin moist. We then wrapped her in the heated towels and cut the toe out of a sock to give her a hat to keep her head warm.”

During the ambulance ride to Christchurch Women’s Hospital, Steve says they closely monitored both Bella and her mum, who at that stage was at risk of possible postpartum haemorrhage.

“On the way into town, we stopped three or four times on the side of the road because we needed to listen to the stethoscope carefully to monitor baby’s heart rate accurately. It was probably the longest trip for everyone in that ambulance.”

Bella spent months under specialist care in the neonatal unit, and today she is happy and thriving, and has already celebrated her first birthday. Steve reckons that it’s stories like Bella’s that confirm he’s in the right job.

Steve has excelled in the paramedical profession by attaining a number of qualifications including a Diploma in Ambulance Practices as a volunteer, a Bachelor of Health Science [Paramedic] through Whitireia New Zealand, and a post-graduate certificate in Critical Care Paramedicine through AUT.

In November, Steve qualified as an Intensive Care Paramedic, which involved an assessment day with three tests – both practical and scenario-based.

“Having graduated as an Intensive Care Paramedic brings a huge sense of relief – probably on my wife’s account also. It’s a massive achievement for me and my family – it’s something that I never thought I’d do, because I left school at a really young age and didn’t get bursary or school cert achievements; so I was by no means an academic.”

Steve was grateful to have received a one-off grant from St John which helped to ease the financial pressure that he and his whānau faced while he was working and studying full-time.

When asked to describe his job, Steve says it’s high-pressured and full of risk, but also very rewarding and exciting.

“It’s a challenging but worthwhile career. We don’t do our jobs for the glory, but a highlight for us is when we get a thank you card or a note that is sent back to us from people we have helped. Or if we see them walking on the street. It’s pretty cool to receive those acknowledgements, and to know that you have helped to make a difference in someone else’s life.

“Ultimately, the reason we do what we do is to help care for others. It’s not about all of the fancy drugs that we administer or the equipment that we use. The sole reason we love our jobs is because we want to look after people and have the ability to be an advocate for every patient that we come across.”

St John are currently collaborating with a number of Ngāi Tahu papatipu rūnanga to provide automated external defibrillators (AED) and CPR training – Ngāi Tūāhuriri were the first to receive an AED in 2015. St John also wish to acknowledge the funding received from Te Rūnanga o Kaikōura to support two St John shifts per week in that community.

St John are looking to further assist Ngāi Tahu papatipu rūnanga to provide programmes such as first aid training. If you or your whānau would like to get involved with any St John programmes, or to learn more about their work, please visit: www.stjohn.org.nz