Ngāi Tahu does not have a recent history of whakairo rākau (wood carving), an art form that almost disappeared in Te Waipounamu about 150 years ago.
Kaituhi Rob Tipa reports. 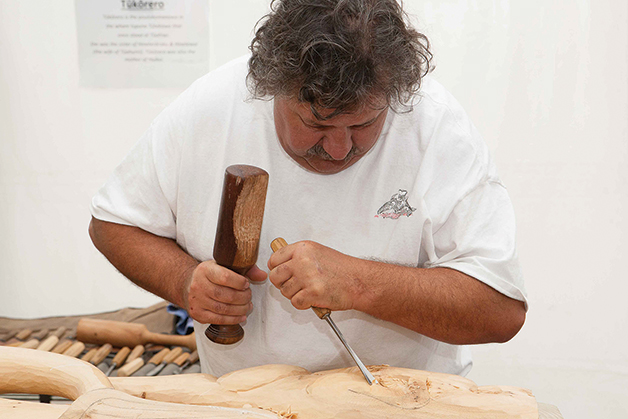 Southern Māori ethnographer Herries Beattie inter-viewed dozens of Ngāi Tahu kaumātua throughout Te Waipounamu as part of the Otago University Museum’s ethnological project in 1920, and noted that most of his informants had never seen master carvers at work in their lives.

One Kaiapoi informant told him he could remember seeing whakairo on the tauihu (figurehead) of waka still in use in his lifetime. Beattie found some ancient carved amo (bargeboards) exposed to the weather alongside the Tuahiwi Hall and estimated the last carvings in that district were probably done in the 1860s or 1870s.

“Most of the whakairo here was done with the matā (flint), but it was so long ago we cannot describe it,” one of his primary sources from Puketeraki told him. Another elderly matua from Colac Bay said he had never seen local carvers at work.

When waka with ornately carved tauihu and tauripa (stern posts) were lost at sea or destroyed by fire, when whare tipuna (carved meeting houses) were burnt to the ground or disintegrated through decay, all traces of Ngāi Tahu whakairo rākau vanished with them.

Their loss poses a dilemma for today’s master carvers, because they have few surviving examples or patterns of traditional tribal carvings on which to base their designs. They rely on archaeological detective work to interpret patterns preserved in taonga such as hei tiki recovered from old pā sites.

With the revival of Ngāi Tahu language and culture and the reconstruction of whare tipuna throughout the motu in recent years, these craftsmen have been given artistic license to express themselves through a combination of historical research and contemporary design.
As West Coast master carver Fayne Robinson explains it, “Today’s contemporary is tomorrow’s tradition.”

Both Fayne and fellow West Coaster Riki Manuel have carved successful international careers for themselves as contemporary artists, but it is their collaborative work bringing the faces of Ngāi Tahu’s ancestors to life on meeting houses throughout
Te Waipounamu that is really turning heads.

Both artists regard carved meeting houses as important visual aids for whānau, hapū and iwi to reconnect with their tikanga and whakapapa. As images of Ngāi Tahu’s ancestors come to life on the faces of their marae, they see a real sense of pride return as people re-establish their whakapapa links with their tipuna.

Today people put up photographs of their tīpuna, but Riki says there were no cameras or photographers around 300 years ago, so carvers created that imagery through whakairo as a visual aid for storytellers to recount their histories.

“For so long we as Ngāi Tahu were heard but we were never seen; so this huge renaissance of whakairo within the whare means we have finally been given an opportunity to reveal our face, so to speak,” Fayne says. “That’s just a matter of progression of who we are and where we are. People are proud to be Ngāi Tahu.

“One of the biggest pleasures I get out of doing such projects is seeing the looks on people’s faces when we finally unveil it. It’s quite rewarding to know you have had a little bit of an influence on people and on their well-being.”

Both carvers grew up on the West Coast – Riki Manuel in Māwhera (Greymouth) and Fayne in Hokitika – and they have followed similar paths since they developed an early interest in Māori arts and crafts. 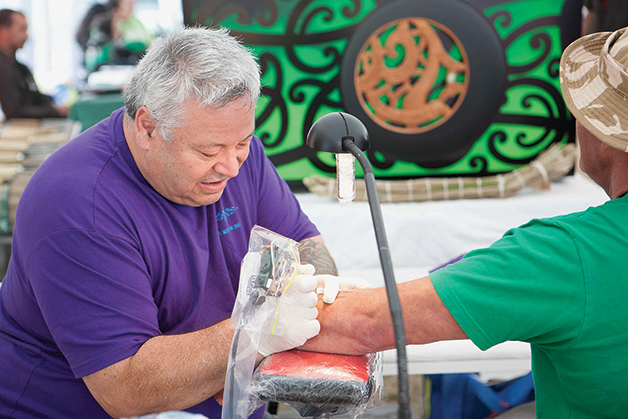 Riki (Ngāti Porou) and two of his brothers were introduced to carving through a Māwhera cultural group, Mātauranga. He went on to begin a three-year carving apprenticeship at the New Zealand Māori Arts and Crafts Institute in Rotorua in 1977, under the strict disciplines of the late tohunga whakairo John Taiapa, head of the institute’s carving school at Whakarewarewa.

“It was a complete change of lifestyle after the West Coast,” he says. “I was pretty nervous when I first got there, but I enjoyed it a lot. I’ve been carving ever since, so it must have been a good course.”

He graduated in 1979 and went on to further study at the Wellington Business School. He established Te Toi Mana Māori Art Gallery in Ōtautahi in 1985 and has lectured and tutored at many academic institutions throughout New Zealand.

These days Riki works as a Māori arts consultant and tā moko artist in Christchurch and is regarded as one of New Zealand’s leading master carvers in wood, pounamu, stone, and clay. He has completed many commissioned works for public display in Christchurch and has exhibited and sold his works widely internationally.

“I always had an interest in carving,” he says. “We used to host the head weaver from the institute (Emily Schuster) when she came over to the West Coast for wānanga,” he says. “She was a major influence on my decision to go north, and encouraged my interest in Māori arts.”

After graduating, Fayne worked for four years as a graduate carver. He tutored in Hokitika, and these days is based at Tuahiwi. He has established a successful international reputation for his contemporary style of carving and, like Riki, has also exhibited and sold works widely overseas.

Both carvers believe their training at the Whakarewarewa wānanga gave them a good basic grounding in the disciplines of their art form, but say their styles are constantly evolving, so no two commissions are ever quite the same.

“We’ve all got a style that is recognisable because it’s clean, it’s well balanced, and then when you leave school each carver’s own artistic license starts kicking in, so your style starts to evolve,” Riki says. “We are influenced by our environment, where we are living, and what the demand is; and that’s where our artistic license comes in.”

The pair worked together on the design of carvings for the new Te Wheke marae at Rāpaki on the shores of Whakaraupō (Lyttelton Harbour), and say the inspiration for those carvings came from the jagged hills surrounding the marae.

“We’re like amateur archaeologists and anthropologists in that we have an interest in Māori art history and we study it a lot,” Riki says.

“We had a look at the environment and stole Mother Nature’s blueprint and put it into the carving,” he says. “We also decided to adopt the hei tiki when we were looking at the particular body form of the poupou. It is the most common figure archaeologists found in that area, so we adopted the forms from that influence.”

Despite their success in turning carving into careers, both artists say they have to be versatile and businesslike to make a living from their craft.

In New Zealand Māori carving is taken for granted, so their work is more highly valued overseas. Both carvers have exhibited and sold work in Canada, where it may fetch four or five times the price it sells for here.

“Working in Māori arts is a hard profession to be consistently employed in, so if you put all your eggs in one basket you’re going to be unemployed most of the time,” Riki says. The more versatile the artist, the more work they are likely to get.

“Wood is still my passion,” he says, but tā moko has become a big part of his business. “Wood doesn’t cry; you don’t need to negotiate with it. The biggest difference between tā moko and carving is health and hygiene; looking after the health of the client.”

Some of the biggest challenges the pair have is working with bureaucrats, tight budget restraints, understanding contracts, sourcing timber, and dealing with unreasonable attitudes that could compromise the integrity of the finished work.

“When you go on to a marae you’re employed as a master carver with the responsibility of designing a carving that is done to a standard, and are then left alone to do that,” Riki says. Once a contract is signed, both parties need to show flexibility to allow for adjustments.

“Many people don’t understand the process and intricacies we go through,” Fayne says. “People see the end result but don’t see the process.”