A haerenga to Aoraki looks into the past to prepare Moeraki whānau for the future.
Kaituhi Mark Revington reports. 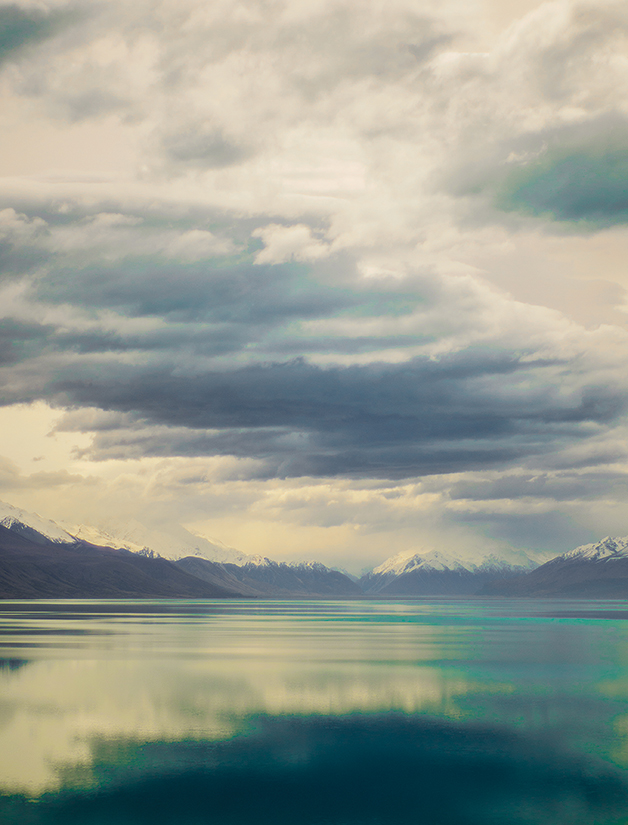 “So here we are at the source of our awa, of Waitaki.” Justin Tipa (Ngāi Te Aotaumārewa, Ngāti Hinematua, Ngāi Tūāhuriri – Ngāi Tahu) dips his hands in the water, surrounded by a gaggle of tamariki with adults standing further back. “We’ve just come from the other side of our pōua Aoraki, and there are a couple of important things for us to hear about at this place. So we’re gonna have karakia and I will share some of our history with you, and I will teach you children a karakia pertaining to the wai,” he says.

“Kia ora, so this particular spring, this water is known as ‘Kā Roimata o Aoraki’. Who can tell me what that means in English?” The answer comes quickly: The Tears of Aoraki.

“Can anyone tell me what the name ‘Waitaki’ means?” The answer comes tentatively. “The crying waters or weeping waters,” he affirms.

“And if you can imagine Aoraki as the glacial snows melt and they flow down to [Lake] Pūkaki and into the Waitaki, it makes an awful lot of sense.

“We are working our way through our pepeha so you kids that have learnt your pepeha, y’know, ‘Ko Moeraki te marae, ko Waitaki te awa… ko wai te maunga?’” “Pōua Aoraki” is the answer, again ventured tentatively at first, and then with a little more certainty. 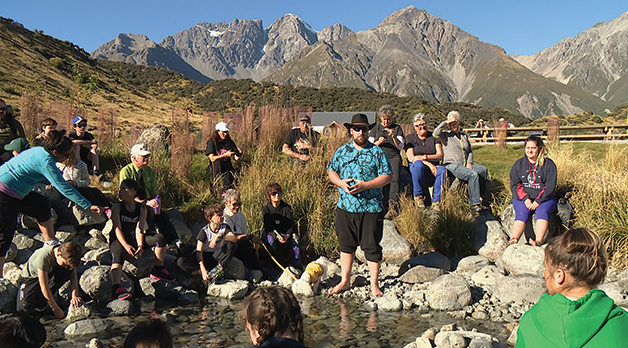 Justin Tipa prepares for karakia with members of the Moeraki haerenga at Kā Roimata o Aoraki.

“So here we are at Aoraki and for those of you who have heard various creation traditions or pūrākau about Aoraki, Waitaki, Takapō and all these important features, we have a unique version and our own take on things according to our Āraiteuru traditions,” Justin says.

It is near the end of the second day of a three day haerenga which began at Uenuku on the Moeraki marae, and journeyed up the Waitaki valley towards Aoraki. Around 60 people have travelled here, led by Moeraki Rūnanga upoko David Higgins (Kāti Huirapa, Kāi Te Rakiāmoa, Kāti hinematua, Kāti Kurī, Kāi Tūhaitara, Kāti Hāteatea – Kāti Hāwea, Te Rapuwai, Waitaha, Kāti Māmoe, Kāi Tahu) on a Go Bus and van, naturally, part-owned by Ngāi Tahu Holdings. David reckons he got a good deal.

“Moeraki is one of the kaitiaki rūnaka for this area and most particularly on the southern side of the Waitaki; and that’s why we venture up into the hinterland – to pay our respects as kaitiaki rūnaka and kaitiaki whānau for this place. The stories and traditions of Aoraki and his whānau are shared among our Moeraki whānau.”
David Higgins Moeraki Rūnanga upoko

It is a haerenga to bring Moeraki stories to life, and to ensure that those on the Moeraki paepae know what they are talking about. Sometimes the haerenga, which happens every few years, from the mountains to the sea. This time, the Moeraki rōpū is travelling from the coast to the mountains.

Along the way they hear the whakapapa of the Waitaki Valley, and the importance of the Waitaki awa to Moeraki. They pass through the landscape as the kōrero comes to life. It is much more powerful this way, experiencing the kōrero among the majesty and power of the whenua, rather than listening to the stories at a wānanga.

“Regularly, Moeraki whānau have come up to Aoraki to pay our respects to our mauka atua, and to share the traditions and stories passed down from our tīpuna to our generation,” David says.

“Moeraki is one of the kaitiaki rūnaka for this area and most particularly on the southern side of the Waitaki; and that’s why we venture up into the hinterland – to pay our respects as kaitiaki rūnaka and kaitiaki whānau for this place. The stories and traditions of Aoraki and his whānau are shared among our Moeraki whānau.

“It’s so natural for us to be among our atua, among these mauka. It is awe-inspiring. Just look around – it is so special to be here among our tīpuna. Part of the hīkoi, part of the reason we have travelled up here, is to share the traditions of this place with our tamariki me
kā mokopuna,” he says.

“Pōua David, our upoko, is one that has fostered the younger generations in terms of our work on the paepae, in terms of karakia, in sharing our histories … As much as it’s a privilege, it’s also a test, to have the honour of sharing our kōrero with our young ones under the guidance of our upoko.”
Justin Tipa Ngāi Te Aotaumārewa, Ngāti Hinematua, Ngāi Tūāhuriri – Ngāi Tahu

The rōpū stayed the night at the Lake Ruataniwha holiday park in motels for kaumātua, and cabins for everyone else. Dinner is at a hotel in Twizel. Breakfast is toast and cereal at the camp.

There is no frost, but the days are clear. It is a special day to journey up to the maunga atua and his whānau and pay respect, David says. Although it does start off on a slightly strange note, with a stop at Lake Pūkaki for a talk on wilding pines and the proposed Meridian/rūnaka redevelopment of the visitor centre. 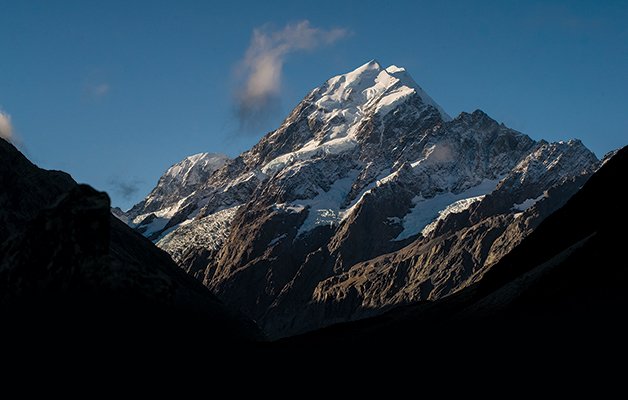 But closer to Aoraki, the serious kōrero begins. Ultimately the haerenga is about keeping the kōrero of Moeraki alive, says Justin.

“It’s about giving our children these memories of travelling their land with their parents, their grandparents and their kaumātua. It’s about soaking up the atmosphere, the wairua, and hearing those kōrero first-hand.

“Also, it’s part of a bigger picture. Pōua David, our upoko, is one that has fostered the younger generations in terms of our work on the paepae, in terms of karakia, in sharing our histories. It’s really significant for me as one of the younger generation to be extended the privilege of sharing our kōrero. As much as it’s a privilege, it’s also a test, to have the honour of sharing our kōrero with our young ones under the guidance of our upoko. If we’re going to get things wrong, it’s best to get them wrong while he’s still here to clip our ears.

“We are really privileged that our upoko and our kaumātua are fostering our generations to fill the roles on the marae. In order to fulfil the role on the marae, you need to know your kōrero, the kōrero of your hapū, of your iwi; and this is part of it.

”This is really important for me to be here, largely because this is my stomping ground, and to come back with my whānau and to share the kōrero that we didn’t have when we were growing up.

“So we’ve done that research. It’s really important to bring our children out here to hear the stories. They don’t have to research, they don’t have to read through manuscripts, they’re not having to go to the libraries. They can say they learnt off their parents, their grandparents, their uncles and aunties. That’s the significance for me. And being up here rejuvenates the wairua.”

This is literally bringing the whakataukī “Mō tātou, ā, mō kā uri ā muri ake nei” to life. David Higgins is passing on his knowledge to Moeraki whānui in a way that ensures the knowledge comes alive for successive generations; that they understand what it means to be kaitiaki rūnaka for this whenua.

David says it was the way he was taught, and he is simply following the traditions he was taught before it is too late. He has spent a lot of time up here. He remembers heading up the Waitaki with his uncles and grandfather in search of supplejack to make crayfish pots.

That created an opportunity for him and others like him to learn the histories and traditions important to Moeraki, he says. David Higgins is known for his generosity in passing on knowledge so Moeraki has younger generations coming through, ready to stand confidently on the paepae.

He has always believed succession should be planned, he says.

“That’s how I was taught. I’m just following how I was trained, the traditions that I was taught; and I want to share them with the next generation before it is too late. It is all very well to say you have a succession plan in place, but to actually practise it is hugely important. I have an opportunity at Moeraki with some young pākeke who can pick up those skills and listen to the kōrero that I pass on.”

He pauses. The sun is setting behind the mountains. “Isn’t it beautiful at this time of day,” he muses. Then comes the clincher.

“I’ve always believed that we as a people need to know two things: who we are and where we come from.

“Once you understand that, then you can shape your life around all these traditions and histories that have been passed down by our tīpuna.”