Missing Connections: how closed adoptions created generations of ‘ghosts’ within our whakapapa

Dr Erica Newman has been awarded the Marsden Fast Start Grant to further her research into transracial adoption in Aotearoa. Over the next three years she will gather accounts and experiences of Māori adoptees and their descendants and document their efforts to connect to their taha Māori. Crucial to her work is understanding how hapū and iwi currently support adoptees and their uri on their whakapapa journey, and in what ways her own experience as the daughter of a Māori adoptee might assist in the future shaping of those processes.

Kaituhi Ila Couch talks to Erica about the intergenerational effects on Māori of European adoption practices on Māori, and why a te ao Māori approach is needed to help those searching out their whakapapa and tūrangawaewae. 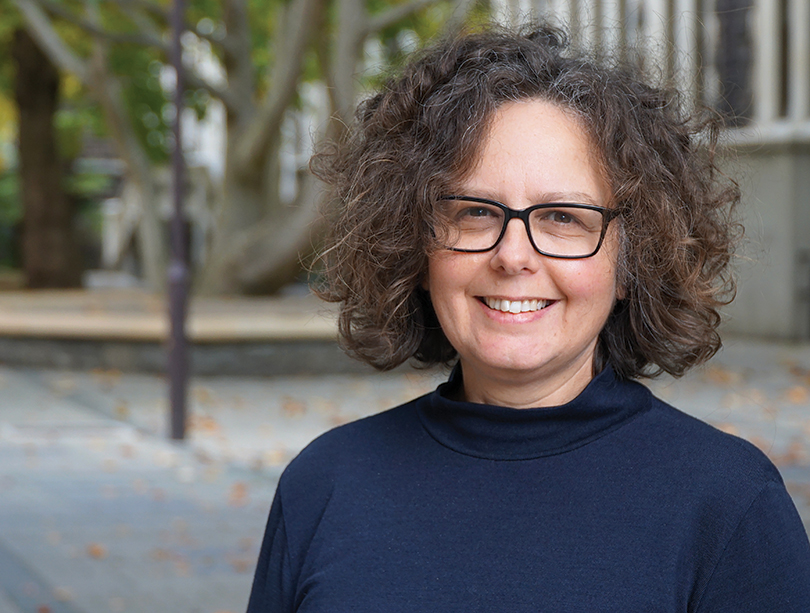 I am the last one through the door of Dr Erica Newman’s whare in Ōtepoti. Ahead of me is Qiane Matata-Sipu, the powerhouse behind NUKU, a multi-media project featuring ‘100 kickass indigenous wāhine’. Together with her right-hand woman and beauty expert, Melissa Harema, I am part of the all-wāhine Māori crew here to capture Erica’s story.

A researcher and lecturer at the University of Otago’s Te Tumu – School of Māori, Pacific and Indigenous Studies, Erica has received a prestigious and highly competitive grant. Today, there will be hair and makeup, a photoshoot, behind-the-scenes video, and a podcast interview – all things the average person would find daunting, let alone an academic who likes to let her work on transracial adoption speak for itself. I hope the sound of laughter filling the house helps soothe the nerves of my childhood friend.

I grew up with Erica in the cul-du-sac of a brand-new subdivision in Papakura during the late 1970s and 1980s. We spent a lot of time together choreographing dance routines, roller-skating like we were Olivia Newton John in Xanadu, and playing with our blonde dolls. We never talked to each other about our Māori identity. I think I knew back then Erica’s mum Beverly was adopted, but I never thought about it beyond that. Bev was as Māori as my own Dad, and our lovely neighbour Harry, but for Erica, not knowing her mother’s true identity and their shared whakapapa, haunted her. It also led to her life’s work.

When considering adoption in Aotearoa the common default thinking is Māori have their own system, whāngai.

“Some people use those terms interchangeably, adoption and whāngai being the same thing,” says Erica. “They are not. Whāngai is the kinship system that Māori have always used for a child who, for whatever reason, might be placed with whānau rather than their birth parents. They would always know who their birth parents were, whether those arrangements were temporary or permanent.” 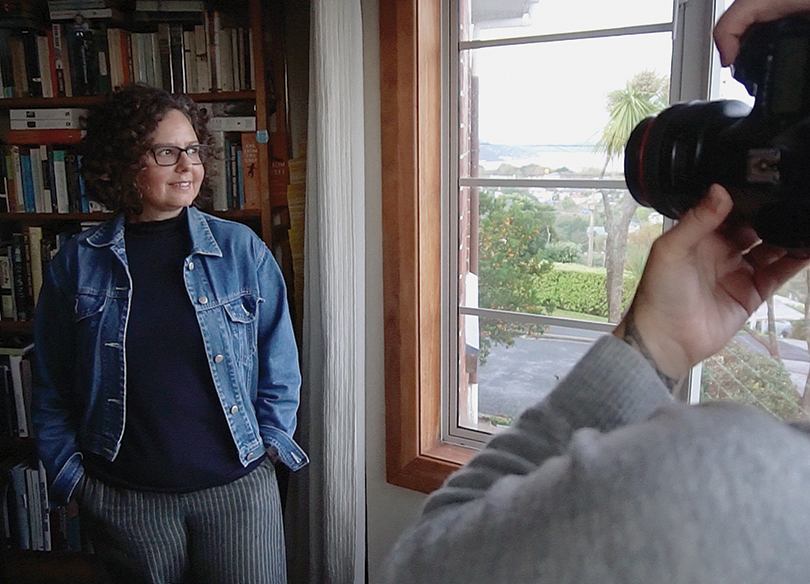 Above: Behind the scenes of NUKU shoot, Erica being photographed by Qiane.

In comparison, the first European settlers to New Zealand brought with them the view that adopted children belonged to their adoptive family, as if they had been born to those parents. Laws were put in place to enforce those beliefs. The 1955 Adoption of Children’s Act created a closed stranger adoption for a Māori child raised in a non-Māori household. “Māori know that the backbone to identity, to knowing who you are is your whakapapa, so if you are denied your whakapapa then …”

Erica trails off. For her own mother and countless others like her, this law is directly responsible for creating missing people or ‘ghosts’, within te ao Māori. It is the unwanted inheritance of future generations, which now includes Erica’s adult children. What the Marsden Fast Start Grant will enable Erica to do is examine the impact of the 1955 Act on the descendants of transracially adopted Māori and uri when it comes to identity, follow their search for tūrangawaewae, and learn about the ways hapū and iwi participate in the process of reconnecting people back in. “There are a lot of people who are not connected to their taha Māori. Some of it is their choice, some of it their ancestors who may have decided to move away and break those connections. That is a whole other kaupapa altogether. That is a choice by someone in the family, but for adoptees this choice has been made for them.”

Erica says her own mother rarely spoke about being adopted. “It was not a subject that was forbidden, just one that did not come up in conversation often,” she says. In 1997, following a move to Australia, Bev requested her adoption file. The 1985 Adult Adoption Act made it possible to access information about her Pākehā birth mother, but there was nothing on file about her Māori father. What they got was an unpleasant glimpse into how this unknown part of Bev’s whakapapa was viewed by potential adoptees. “She got returned a couple of times because she was too dark. She was classified as a Pākehā because her birth mother put the father as half-caste Māori. Blood quantum wise, Mum was more Pākehā than Māori. You see photos of mum as a baby and you think, ‘How could you not have wanted to keep her, she is beautiful’. It says a lot about 1948 Auckland.”

Bev was able to make contact with her half-siblings who had no idea of their sister’s birth. Erica says there was one tantalising but heartbreaking clue the family shared. “They realised when they were cleaning out their mother’s house that there was a photo of her with
a Māori gentleman. They wondered who he could be, and threw it out.”

“The main thing, especially with adoptees and children of adoptees making connections, is they just want identity … to know where they have come from, their tīpuna and what events have happened in the past to help form their identity to be able to talk about their people.”
Erica Newman Researcher and lecturer at Te Tumu – School of Māori, Pacific and Indigenous Studies, University of Otago

Erica and her whānau continue to search for their whakapapa and their stories will be amongst those willing to take the journey with her. “I just want people to feel confident in telling me their stories.” She knows the first step on the journey to finding your birth parents might be difficult. “There is a lot of negotiating that goes on for adoptees: ‘What is my adopted parent going to say? Am I going to upset them? Should I wait until later or should I do this behind their backs?’

The adoptee is put in the position where they don’t want to upset anyone, but they are the ones who have been denied their birthright. They are not really asking for anything other than what they should have been entitled to when they were born.”

To build up that community Erica has set up a Facebook page for Māori adoptees and descendants of adoptees. The page is a safe space to ask questions, share stories and support each other on the journey to finding their tūrangawaewae. The page also provides a way for anyone who is interested in participating in the research to get in touch with Erica.

Organisations like Oranga Tamariki have reached out to Erica to begin a dialogue about the work she is undertaking. “It is important to work with different parties so that everybody can get an understanding of what the current processes are and how that might impact adoptees and their uri. For example, it is written on the Oranga Tamariki website that when you request your file it is sent to a counsellor and they review it with you. If you are out of the country that file is sent directly to you. In my mind it puts another barrier up for someone who is not willing to jump through more hoops for something that is their birthright.” 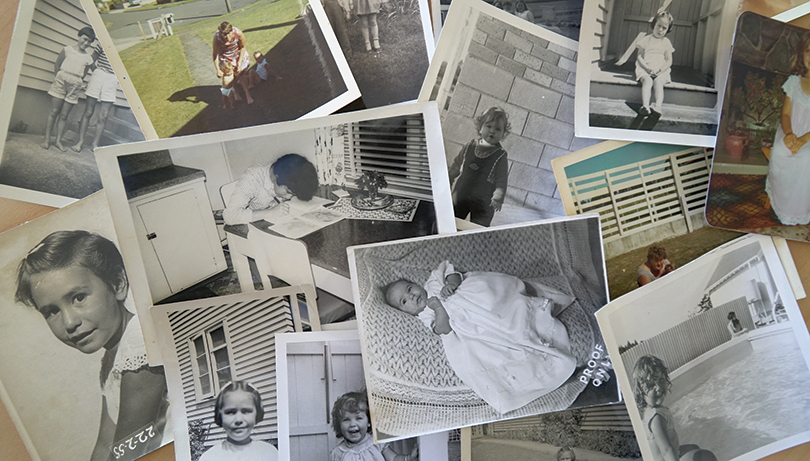 Above: A montage of early photos of Erica and her mum Beverly.

Building relationships with hapū and iwi throughout the country is significant to the project, says Erica. “The main thing, especially with adoptees and children of adoptees making connections, is they just want identity. They are not actually interested in assets and ownership of land. They just want to know where they have come from, their tīpuna and what events have happened in the past to help form their identity to be able to talk about their people.”

Erica is keen to learn what levels of support hapū and iwi offer adoptees and their descendants, while sharing some of the concerns those coming forward might have. She understands that for people raised in te ao Māori, this is not something that is necessarily on their radar. “Having issues with your identity affects you,” says Erica. “If you are going to use Te Whare Tapa Whā model as an example, you don’t have four straight walls. You have cracks and your whole mauri is out of balance.”

Anything to do with adoption is hard, but there is hope the project will spark a conversation about the ways te ao Māori can reimagine kinship systems in response to the effects of colonisation. In looking to our own pūrakau, Māui was able to gain acceptance because he could prove his relationship to his mother. European concepts like birth certificates do not always work when, for whatever reasons, the birth mother omits the father’s information.

Erica has already heard from people who know who their family are and have those whakapapa connections but are not acknowledged by their own iwi because of the requirements of iwi registration. “Adoptees and their whānau are in such a vulnerable place. I am trying to think how we can make things better for everyone and part of my research is about how iwi do that, and how that process effects everyone involved. Whanaungatanga, manaaankitanga and aroha is what we need,” says Erica.

The podcast portion of the day has been going on for well over an hour and after that Qiane will be diving straight into the photoshoot with Erica while I shoot a behind-the-scenes video. The kōrero must be good … the light is fading. When Erica emerges, she looks relieved. Melanie moves in to touch up hair and makeup, and Qiane has Erica laughing and smiling for her portraits.

It has been a good day and I am glad, because I was the one who nominated Erica to be a part of the NUKU 100 project. It was totally selfish of me because I want her to be acknowledged as wāhine Māori, something she feels she can’t claim until she has whakapapa.

I hope te ao Māori will awhi Erica as she undertakes this important mahi. I hope all those people looking for whakapapa find their way back to us. I hope this for Bev, for Erica, and her children, and the generations to come.

Dr Erica Newman’s audio interview can be found at nukuwomen.co.nz/nuku100/
To connect with Erica and other adoptees and uri in their search of whakapapa https://www.facebook.com/groups/377407636901022