Nadine Tunley (Ngāi Tahu – Ngāti Wheke, Ngāti Waewae) has a long career in the primary foods sector, largely in export and international markets. In May 2017 she became CEO of Watson & Son, the Ngāi Tahu-owned mānuka honey business, and is currently guiding them through a restructure and rebranding to Oha Honey. Kaituhi Anna Brankin sits down with Nadine to discuss the challenges she has overcome and the passion that drives her. 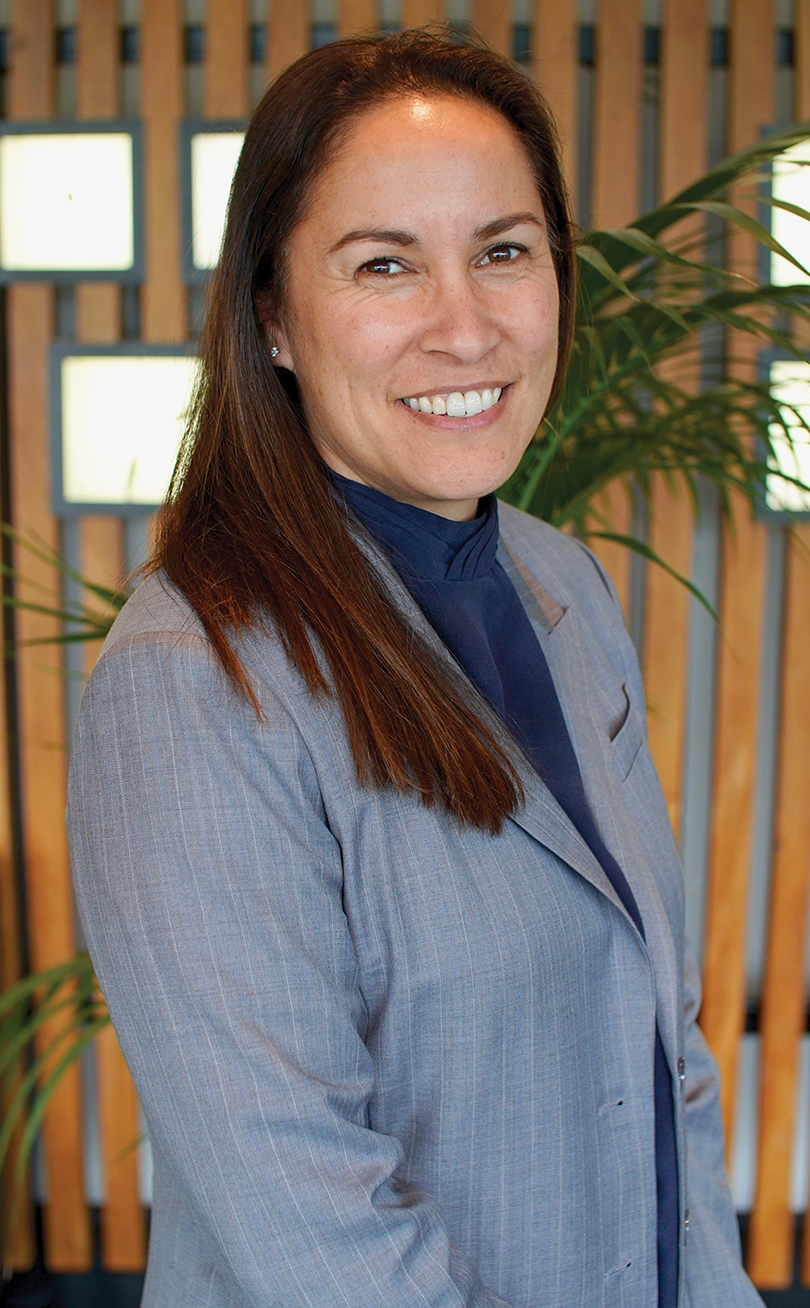 “I remember vividly the day I got the call about coming to work here,” says Nadine as we sit in a meeting room in the compact Oha Honey offices in central Wellington. “I said, ‘Oh yeah, no.’”

At the time, she was working for Kono, a Māori food and beverage company owned by Wakatū Incorporation. “I didn’t think I was ready to leave, but it kept eating away at me,” she recalls. “I thought about it, made a few calls, and asked a few questions. Then I rang the recruitment agency back and said, ‘Actually, I’m considering it.’”

Nadine started as CEO of Watson & Son on 1 May, 2017. At that stage, the business had two distinct divisions: MānukaMed, and Watson & Son LP, a honey production and export company. At the time, the business was encountering issues as the shareholders struggled to find a way forward after two very poor production seasons.

“At that stage Ngāi Tahu Holdings were 50 per cent shareholders alongside the Watson family,” Nadine recalls. “I knew there had been some tensions, but I wasn’t sure of the extent of it.”

In November 2017, the shareholders made the decision to separate, with the Watson family taking ownership of MānukaMed, and Ngāi Tahu Holdings becoming the sole owner of Watson & Son LP, now named Oha Honey LP.

This transition has been essential for Nadine and the team at Oha Honey. Nadine has always had a passion for working with start-ups as they get on their feet – which Oha Honey is, for all intents and purposes. This, combined with her experience in primary industry and international markets makes her a natural fit.

“I was working for an accounting firm in Nelson in 2000, and at that time one of the largest orchard groups in the South Island was using that firm,” she says. “They decided to get their export permit just before the pipfruit industry was deregulated. I got involved at that stage to help that whole process occur, and from there I spent nearly 18 years in horticulture.”

Nadine’s work has seen her travel the world, notably spending several months in India as part of negotiating New Zealand’s involvement in a World Bank project in the state of Himachal Pradesh. She has owned and operated her own produce export business, and has served on a number of boards, including as the chair of New Zealand Apples & Pears.

“There are a lot of similarities between the honey industry and horticulture,” she says. “In New Zealand we export 80 to 90 per cent of everything we produce, so the biggest challenges are market access, biosecurity, exchange rates, and science and innovation.”

Nadine has spent the bulk of her career dealing with these challenges as the facilitator who sits between the landowner/grower and the markets – a position that comes with its own set of challenges in the honey industry, which is still in its formative stages after experiencing a growth that Nadine describes as a “liquid gold rush.”

“New Zealand’s hive numbers have increased from 350,000 to a million in less than six years,” she says. “There are three major operators – ourselves, Comvita, and Manuka Health – that control 85 per cent of the honey exports out of New Zealand. But we are each registered as only one beekeeper, and there are nearly 6000 individually registered beekeepers who can have an impact on how we operate.

“A lot of those producers aren’t market-facing, and they don’t see the impact of breaking the rules,” she explains. “It only takes one person to decide not to treat for a certain disease or to ignore the rules of a certain country we’re exporting to. Those things can destroy an industry.”

However, Nadine says she thrives on challenges so she isn’t put off by the obstacles that lie ahead. On top of that, she sees this role as an opportunity to use her expertise in the primary industry and export market for the benefit of the iwi.

“The values that steer Ngāi Tahu and their companies are so broad, and so fundamental to human nature. Even though I wasn’t brought up with that connection to the iwi, I have realised that those values were instilled in me by my Dad.”

In 2013, Nadine participated in the pilot of Manawa Nui, a programme that offers Ngāi Tahu whānau the opportunity to enhance their commercial governance experience. Over two years she spent time on the boards of both Ngāi Tahu Holdings and Ngāi Tahu Seafood, offering her experiences she describes as invaluable.

“It was a great opportunity to learn more about Ngāi Tahu Holdings, and the width and breadth of their businesses,” Nadine says. “But it was also a chance to understand more about the iwi and find out about my whakapapa – for that, it was brilliant and I am grateful.”

Nadine’s father was born Wi Riwai Tauwhare, but changed his surname to George before Nadine was born. She grew up with very little understanding of his Ngāi Tahu background, and it wasn’t until he passed away in 2000 that she made the decision to move to Te Waipounamu with her husband Pat, and their children Matthew and Alesha.

These days, Nadine is primarily based between Masterton and Wellington, although Oha Honey’s hives are placed as far north as Northland and south to Rangiora. Her job is time-consuming and demanding, with the organisation recovering from a major restructure and two difficult harvest seasons. “It’s been a difficult year, and we’ve been through a lot together,” she says. “Last year, 80 hour weeks were not uncommon – weekends, nights, eating in offices.”

But Nadine is adamant that there is light at the end of the tunnel. “My aspiration is to build Oha Honey into the investment that it was meant to be, and that it absolutely can be,” she says. “The reality is that this company wouldn’t exist if it weren’t for Ngāi Tahu Holdings. They made a conscious decision to support it, and it’s now the responsibility of myself and my team to make it successful.

“For the next 12 months we’ve got to go hard and make the necessary changes,” she says. “I’m looking forward to it. This company needs to get to a certain point and until it’s there I probably won’t relax too much. It is what drives me.”

According to Nadine, the key to realising that vision lies in the values that underpin all the businesses owned by Ngāi Tahu Holdings. “I honestly believe successful businesses are built on values,” she says. “If you’re genuine and authentic, you’ll find like-minded people and companies to align with.
“The values that steer Ngāi Tahu and their companies are so broad, and so fundamental to human nature,” Nadine continues. “Even though I wasn’t brought up with that connection to the iwi, I have realised that those values were instilled in me by my Dad.”

She references the values of manaakitanga and whanaungatanga – traits that she absorbed instinctively by observing the way her parents behaved, and in turn passed on to her own children.

“Those values are just inherently ingrained,” she says. “I never questioned it or thought, ‘These are my values.’ They’re just who I am, and that translates to the way that I do business.”

These values have had a strong influence through Nadine’s career when deciding which opportunities to pursue. “I try to do things that I feel connected to. If I can’t bring it back to being quite important to me fundamentally, then I’m wasting my time,” she says.

“I’m careful not to stereotype, but throughout my career I have noticed that a lot of women I’ve worked with are the same – they want to be involved in things that they feel an emotional connection to.”

Nadine has had ample opportunity to observe different working styles between men and women, after spending most of her working life in a male-dominated industry.

“When I first got into NZ Apples & Pears, I would go to conferences and look around wondering, ‘Is there another woman here? Anywhere?’” she laughs. “I’ve literally been asked, ‘Why are you not at home in the kitchen?’”

She can joke about it now, but Nadine says that at the time, it was difficult to navigate these challenges. “I had some pivotal moments; one of them being when I was nominated to be the chair of NZ Apples & Pears,” she recalls. A former employer wasn’t happy with the nomination – he had held a grudge against Nadine since she left his company to start her own, and had used his influence in the industry to make things difficult for her.

“We were offshore at a trade show when I was nominated, and he went around everyone with voting power and lobbied against me,” Nadine says. “It got really personal, but I had to stand there and take it. I knew that if I reacted it would confirm their expectation that women are too emotional.”

Nadine retreated to her hotel room and made a call to her husband, who was at home in New Zealand.

The piece of advice that ultimately changed her perspective came from the simple question he asked her: “Why do you care what he has to say? If you can’t handle this, then you need to get out now.”

“I burst into tears when he said that, of course,” she says. “But actually, he was so right. I pulled myself together, got dressed for our night of events and went out. And I ended up being voted as chair of NZ Apples & Pears, a role I held for the next seven years.”

This experience helped Nadine develop a strategy that she uses to this day to help her overcome criticism and opposition in her work. “I started thinking of it like an onion, with layers representing what I care about,” she says. “At the core, at the highest level of care, are my husband and my two kids. Then my family – my parents, and my brothers and sisters. Then a really tight circle of friends, and so on. Those central layers are all that matters, and all the rest falls away.”

This philosophy has served Nadine well over the years, and continues to guide her as she steers Oha Honey into the future. “I’ve always been proud to say that I’m a Tahu, and that my iwi is a success story,” she says.

“Personally, I just want to make sure that it continues to be one. Aspirations are our guiding light in that.”