“Cultural connection” or “connectedness” are terms used with increasing frequency, but what do they really mean? The reality is that cultural connectedness means something different for everyone, and most largely relates to one’s life experiences. In a Ngāi Tahu context, does being culturally connected mean living in the takiwā and being actively involved in the local activities of the iwi, or can one have a meaningful connection living in the North Island or further afield? With more than 50 per cent of the iwi living outside of the takiwā, this is an interesting consideration. In this issue of TE KARAKA we feature several stories that demonstrate the richness and diversity of cultural connection within the iwi near and far.

The Melbourne taurahere group was set up just a year ago, and is going from strength to strength in numbers and engagement. In those 12 months the Ngāi Tahu Road Shows have visited the taurahere group twice, and they have recently completed their second Kura Reo – the first ever to be held outside the Ngāi Tahu takiwā. Rōpū member Nic Low shares some of the passion and commitment of their cultural engagement in action from afar.

Ward Kamo joins the TE KARAKA team in this issue, sharing the journey of his grandmother Kui Whaitiri and their whānau through the years leading up to the Settlement. Ward’s story (page 9) offers a wonderful first-hand account of the tireless mahi of those at the forefront of
Te Kerēme, righting the wrongs of the Treaty of Waitangi.

And Marlon Williams, the boy from Lyttelton, now based in Berlin and making a big name for himself, shares his views on Ngāitahutanga, what it means to him, and how it influences his music career. 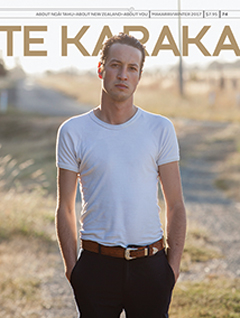