This year marks 20 years since the signing of the Deed of Settlement, a defining moment in a journey of over 150 years, which brought an end to the pain and struggle of a grieving people. And with this closure came a new beginning, with $170m plus add-ons in the bank and a newly formed organisational structure to manage the settlement. However, in celebrating this milestone, it is important to reflect on where this last part of the journey began – the lodgement of the claim some 11 years earlier.

In this settlement-focused special edition we are privileged to have a first-hand account from the late Rakiihia Tau (Snr) who was responsible for the lodgement of WAI27, the Ngāi Tahu Claim in 1986 and the subsequent establishment of the A-Team negotiators. Heartfelt thanks to Te Maire Tau for allowing the publication of his father’s personal recordings.

Claim negotiator and tribal rangatira Tā Tipene O’Regan, provides a challenging and thought-provoking account (page 32) of whether the original vision of those negotiators for a post settlement Ngāi Tahu has been realised and where things might be falling short.

And while there will always be a range of views and opinions on the post settlement success (or not), there really is no denying that on the face of it, the results speak for themselves – well certainly economically. But let’s not get stuck in the journey thus far – what is the tribal vision for the next 20 years and beyond? A desire to restore rangatiratanga was at the heart of Te Kerēme. Today, how do we ensure that our young and burgeoning population have the good health, education and employment opportunities to allow them to determine their own paths? On page 16 Anna Brankin talks to four rangatahi born in 1997 who share their perspective on what it means for them to have been born post settlement and their aspirations for the future. 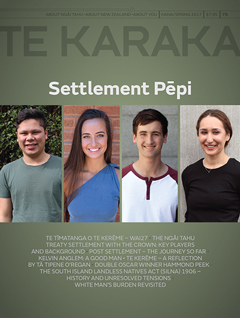 Front Cover
Settlement Pēpi: rangatahi who have grown up in a post settlement world (page 16).