In the last issue of TE KARAKA we featured an opinion piece by Ward Kamo entitled “Māori victims of crime”. In this column Ward argued that rather than focusing on criminals and the justice system, we should focus on the victims of their crimes – often the offenders’ families and communities – and provide support and skills to help them break the cycle. This view has sparked considerable reaction, not only among our TE KARAKA readers, but much further afield. In this issue we hear an alternative viewpoint from Dr Moana Jackson, who has been actively involved in mahi relating to Māori and the criminal justice system for several decades. Feedback is always welcomed and encouraged, so if you feel strongly about anything we feature, please send us your thoughts.

On page 14 we celebrate the growing resurgence of the cultural tradition of moko kauae, with 15 wāhine Māori recently taking the bold and courageous step to wear their whakapapa proudly and permanently on their chin. Several of these wāhine shared their stories and their motivation with our assistant editor Anna Brankin as they went through the process.

It was fitting that the Hui-ā-Tau should be held at Ōnuku last month, almost 20 years to the day since then Prime Minister Jenny Shipley delivered the Crown Apology to Ngāi Tahu. For the whānau at Ōnuku it was also an opportunity to celebrate 21 years since the opening of their whare tipuna, Karaweko. On pages 30-33 we attempt to capture the essence of the event – not least the heartfelt manaakitanga and whanaunga-tanga enjoyed by all those who braved the weather to attend.

And as another year comes to an end, we wish you all the very best of festive greetings and a safe, joyous and restful time spent with whānau, wherever in the world you may be. 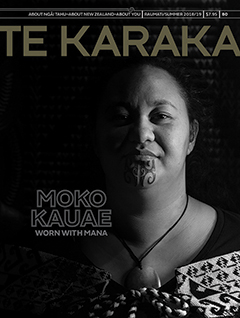