It’s hard to believe it is only three months since we published the last issue of TE KARAKA. So much can change in such a short time, as we have witnessed with the passing of a number of whānau and tribal leaders, among them Tahu Pōtiki and Pere Tainui. Over the past year we have had the privilege of featuring stories on both Tahu and Pere – two rangatira with incredible vision and passion for their whānau, hapū, and iwi; and for the revitalisation of cultural practices. Reflecting on their stories makes one realise the importance of publications such as TE KARAKA as a vehicle for capturing and sharing tales of our journey and our people.

The recent regional growth fund injection of $3.7 million into the Gore District (see page 18) is an exciting prospect that offers the potential for new business development and employment, and the fulfillment of long-held dreams and aspirations. As the vision of Haea Te Awa begins to unfold for the iwi, the timing of such announcements is perfect to support the building of whānau, hapū, and regional economies throughout the takiwā. At a whānau level, fisherman Nate Smith (see “From hook to plate”, page 12) is a great example of what can be achieved when the right idea is combined with the motivation to make good things happen. Gravity Fishing not only employs Ngāi Tahu whānau, but has supported the development of other related whānau businesses. Admirable also is Nate’s ethical approach to the sustainability of our kaimoana.

In a world where we are constantly bombarded with negative statistics about the disproportionate numbers of Māori in incarceration, family harm, and tamariki in care, it is heartening to read about inspirational initiatives in our community making a difference in the lives of whānau. 0800 HEY BRO (page 27) and Tai Wātea (page 30) are two such programmes empowering whānau to change their life pathways and make positive choices.

Here’s to spring, and the delight that comes with the sprouting of new life and warmth of te rā. 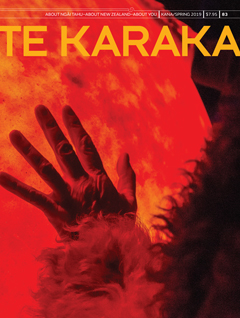