As we go to print with this issue of TE KARAKA we are yet again reminded of today’s constantly changing world. It doesn’t matter who we are or where we live, COVID-19 is impacting us in some way.
We can’t stop its transmission but we can take the precautions necessary to keep ourselves and our whānau healthy and safe – please take care.

For most Ngāi Tahu the connection to and passion for mahinga kai pulses through their veins – it’s in the DNA. Traditionally the gathering of kai was a huge part of whānau life and survival, and it’s not that different now. Each year when the season comes whānau gravitate to their awa to get themselves a feed of that precious little fish known as īnanga. Sadly, the ongoing degradation of our environment continues to impact negatively on many of our taonga species and whitebait is no exception. There’s no denying there isn’t as much bait around as there used to be, but the government’s recently proposed changes to whitebait management blatantly contravene its legal responsibility to tangata whenua as Treaty partners, and shows disregard for the customary practices that have sustained many generations of whānau. In this issue of TE KARAKA assistant editor Anna Brankin speaks to Ngāi Tahu whitebaiters from around the takiwā to get their views on the matter (page 8).

The age-old practice of grouping students based on ability has been embedded into the education system in Aotearoa for decades despite the wealth of research highlighting just how destructive this practice is for many students – particularly Māori and Pasifika who are most often put in the bottom classes with little or no performance expectation. In Time to raise the gaze (page 18) kaituhi Kim Victoria examines the impacts of streaming and speaks to a couple of teachers who have been bold enough to push for a new and more equitable approach – with resoundingly positive results.

Finally, we hope our readers are inspired by the journey of Nikora Rautahi-Mahuika and the creation of his thriving Murihiku business Georgetown Barbers (page 22). Nikora is testament to the adage that anything is possible and dreams really do come true! 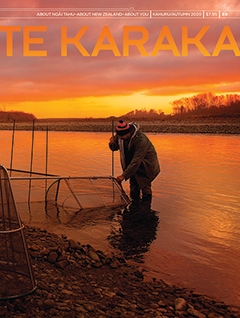