What separates an ordinary woman from an extraordinary one? The belief that she is ordinary.’ Jody Williams, Nobel Laureate.

Humble, selfless, courageous and humanitarian are just some of the words that spring to mind when reflecting on the subject of our cover story for this issue of TE KARAKA (page 10). Therefore, it came as no surprise to learn that Aroha Reriti-Crofts was made a Dame in the Queen’s Birthday honours earlier this year for her lifetime of service to Māori and the community. It is no exaggeration to say Dame Aroha is an extraordinary wāhine whose work has always been dedicated to her iwi, hapū and whānau, with a particular focus on the wellbeing of wāhine and tamariki.

Dame Aroha’s diverse mahi spans all aspects of Māori life, and has notably included more than 50 years as a member of the Māori Women’s Welfare League (MWWL), a number of those as the national president. Over its lifetime, the MWWL has become highly regarded at the grassroots level and nationally as a powerful advocate for wāhine and tamariki, using its collective powers to lobby government and always operating with aroha and care for wāhine katoa. Today’s league members will tell you that, like many voluntary organisations, the number of active members is dwindling and ageing. It would be a travesty to think that one day the MWWL may cease to exist if membership cannot be sustained by new generations.

As you will read on page 26, the Blenheim branch is working hard on a succession plan to connect and grow future membership, with a lively group of rangatahi actively engaged in league activities within their community. As with Dame Aroha and her whānau (daughter Amiria, current MWWL national vice-president, and mokopuna Reriti), the Blenheim branch is three generations strong for some whānau. Long may we continue to celebrate this collective of extraordinary wāhine.

Moving forward, there will be only two print versions of TE KARAKA each year. Over time we aim to have more of an online presence that will expand the scope for sharing our whānau stories. 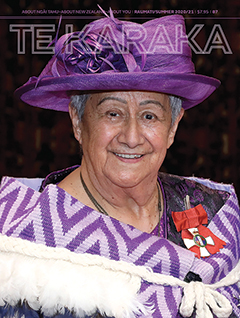 Front Cover
Dame Aroha Reriti Crofts, the first Ngāi Tahu wahine to be made a DNZM pictured at her recent investiture at Government House in Wellington.
Photo: Supplied by Government House.