It is hard to find the words that best describe Tā Tipene O’Regan and his contribution not only to Ngāi Tahu and his tireless efforts in the settlement of the Ngāi Tahu Claim, but also his passion for improving the economic, cultural and social standing of Māori and their communities – towards making Aotearoa a better place for us all to live. Never has there been a New Zealander more deserving of his most recent accolades – Kiwibank New Zealander of the Year and the Order of New Zealand (ONZ). To receive not one but both, and just in a few short months of each other, speaks volumes about his efforts over many decades. Establishing the Ngāi Tahu Archive back in 1978 is I believe perhaps one of his finest achievements – recognising the absolute importance of capturing and storing history to ensure it remains for the generations to come – is an incredible taonga. There is so much that can be read about Tā Tipene O’Regan the public figure, however, in this issue of TE KARAKA (page 26) we have the privilege of sharing some of his more personal stories – his whānau and his upbringing, his love of boats and books – eloquently captured by Kaituhi Anna Brankin. My favourite quote: “home is where my books are.”

Also in this issue Chantal Tumahai shares her very personal and emotional story of the birth of her twin daughters Waitaiki and Raureka almost 12 months ago, and the journey in the days after for life saving surgery at Starship Hospital
for her precious pēpi Raureka. It is hard to even begin to imagine the fear, trauma and anxiety for Chantal and partner Josh just moments after experiencing the joy of the birth of their baby girls, faced with
a decision no new parent would ever want to have to make. I’m delighted to say this is a story with a very happy ending (When a tiny heart pulls a ton of love, page 16) – one year on Raureka is well and thriving thanks to the incredible efforts of her medical professionals.

As always there are many diverse kaupapa captured in these pages – enjoy.

© 1995 The entire contents of Te Karaka are copyright and may not be reproduced in any form either in part or in whole without the written permission of the publisher. All letters addressed to Te Karaka will be assumed intended for publication unless clearly
marked “Not for Publication”. 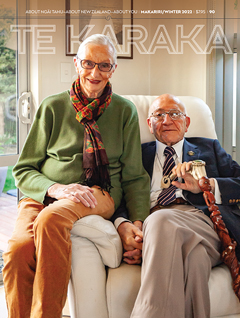