Earlier this month I had the pleasure of attending a weaving wānanga at Awarua Marae. From the moment I arrived I was struck by the overwhelming sense of whanaungatanga and community among this group of wāhine who have been coming together monthly for the past year-and-a-half to learn the art of weaving korowai. The project, which has received two rounds of funding from the Ngāi Tahu Fund, truly exemplifies the original vision of the fund established 10 years ago – strengthening cultural excellence. The skill and talent of the group can be seen in the images accompanying Anna Brankin’s Weaving: the thread that binds past with future (page 38) and equally, the pride that comes with the accomplishment. The most poignant moment: the presentation of a korowai to Hana Morgan, who initiated the idea of the wānanga some years ago, but sadly has been unable to participate due to ill health. E te rehe, nāia te mihi kau, nāia te owha ki a koe.

In this issue we feature another initiative celebrating 10 successful years – Whai Rawa – the tribal savings scheme that is all about enabling self-determination for whānau through financial independence. With over half of all registered Ngāi Tahu whānau enrolled and a total fund value of $52 million, there are many positive, life-changing stories to celebrate.

The Ashburton District Council’s recent consideration of a resource consent for the potential sale of bottled water caused public outcry in the local community and serious concerns for Ngāi Tahu. After months of discussion and negotiation, the news that the sale wasn’t going ahead was a huge relief for the iwi, and a reminder of the importance of mana whenua in decision-making relating to this taonga resource.

In the previous issue of TE KARAKA we credited Caleb Robinson as the carver of the pou featured on our cover. It was in fact his uncle – master carver Fayne Robinson. Our apologies for this error – nō mātou tonu te hē. 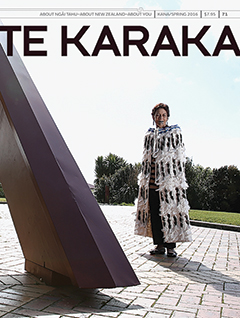 Front Cover
Hana Morgan wearing the korowai gifted to her by Maata McManus and the Awarua weaving wānanga wāhine.
Photograph by James Jubb.