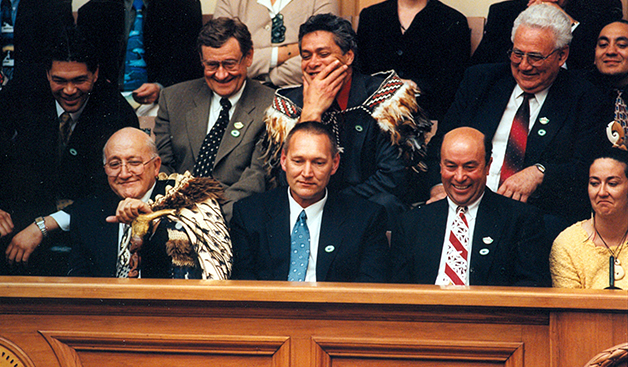 The people who were in my mind were those kaumātua with whom we have worked in the struggle for justice in our own generation but who have died over the last twenty or so years. They sat at the old Trust Board table, they sat through the long years before the Tribunal, they travelled from hui to hui and loyally supported our people’s cause. Many of them contributed not just their time but their savings as well. Their children and, in some cases, their mokopuna were there singing but I could not get them out of my mind then or in the days that have followed.

Over the next year or so we have some enormous challenges as we work through the options we have secured in the settlement. We will be making decisions in a time of grave difficulty in the international economy. New Zealand is already powerfully affected by the world downturn and there is little prospect that things will improve over the time that we have the capacity to handle the economics as well as anyone and there’s not much we as Ngai Tahu can do about the larger political frame of our country. That is something we can only cope with as it happens.

We can, however, do something about the quality of our own internal politics and pledge ourselves to maintaining our cohesion and our unity as a people. We must insist on the highest standards of commitment and focus from our leaders. We must desist from regional jealousies and ‘mana-munching’ and seek a new generosity of spirit. We must commit ourselves to making the best decisions on the settlement options that it is humanly possible to make. If we can devote ourselves to that cause over the next twelve months then we will have justified the faith that our kaumātua placed in us and honoured our duty to the coming generations.

The trust of those departed who were present with us last week in Parliament will not have been misplaced.

The History of the Claim

Ngāi Tahu made its first claim against the Crown for breach of contract 149 years ago.

In 1849, Matiaha Tiramorehu petitioned the Crown to have put aside adequate reserves to land for the iwi, as it had agreed to do under the terms of its land purchases from Ngāi Tahu

In the 20 years from 1844, Ngai Tahu signed formal land sale contracts with the Crown for some 34.5 million acres, approximately 80% of the South Island, Te Wai Pounamu.

The Crown failed to honour its part of those contracts when it did not allocate one-tenth of the land to the iwi, as agreed. It also refused to pay a fair price for the land.

Robbed of the opportunity to participate in the land-based economy alongside the settlers because the Crown failed to honour its contractual undertakings, Ngai Tahu became an impoverished and virtually landless tribe. Its full claim involved some 3.4 million acres of lost land, one-tenth of the Ngai Tahu lands total sold to the Crown.

When Ngai Tahu first took its case to the courts, in 1868, the government passed laws to prevent the Courts from hearing or ruling on the case. A Commission of Inquiry a decade later had its funding halted by the Crown to prevent it completing its work. In 1887, Royal Commissioner Judge MacKay said only a “substantial endowment” of land secured to Ngai Tahu ownership would go some of the way to “right so many years of neglect”.

By the time of the findings on the land claim by the Waitangi Tribunal in 1991, at least a dozen different commissions, inquiries, courts and tribunals had repeatedly established the veracity and justice of Ngai Tahu’s claim. The Waitangi Tribunal itself said after extensive hearings: ”The Tribunal cannot avoid the conclusion that in acquiring from Ngai Tahu 34.5 million acres, more than half the land mass of New Zealand, for £14,750 pounds, and leaving them with only 35,757 acres, the Crown acted unconscionably and in repeated breach of the Treaty of Waitangi”.

“As a consequence, Ngai Tahu has suffered grave injustices over more than 140 years. The tribe is clearly entitled to very substantial redress from the Crown”.

These “grave injustices” based on the “unconscionable theft” by the Crown are the basis of the claim which Ngai Tahu has pursued. As well as stolen land and food sources, fisheries and forests, the claim relates even to hospitals and schools which Crown agents had promised would be built and provided for iwi in each area when the land purchases were made.

Dozens of breaches of the Treaty of Waitangi’s provisions are identified in the Tribunal’s three separate reports on Ngai Tahu claims.

These reports detail clear fraud and theft by the Crown, which deliberately used every available process and loophole to alienate Ngai Tahu from its land and resources, for minimum payment.

Ngai Tahu suffered no openly declared raupatu or confiscations, as happened in the north. However, the Crown’s action in taking land and refusing to meet its contract obligation to allocate one-tenth to the iwi, deprived five generations of the tribe of virtually all the land and resources required to survive at anything other than subsistence level. By the early 1900s, fewer than 2,000 Ngai Tahu remained alive in their own land.

In 1986, Rakiihia Tau filed the Ngai Tahu claims with the Waitangi Tribunal. Negotiations between the Crown and Ngai Tahu on the claims began in 1991, after the release of the tribunal’s Ngai Tahu land claims report.

The assets available for use in any settlement were recognised as Crown-owned assets within the Ngai Tahu tribal boundaries in the South Island. Ngai Tahu has consistently said no private land or homes should be included in the negotiations.

The negotiations which began in 1991 were suspended unilaterally by the Crown in 1994. Ngai Tahu then sought and won court orders against the Crown, securing orders to prevent the sale of Crown-owned land and other Crown assets in the South Island. The Court ruled such assets had to be preserved for potential use in any settlement reached between the parties.

Following the intervention of the then Prime Minister, Mr Jim Bolger, negotiations were resumed in 1996. They led to the signing of nonbinding Heads of Agreement on the 5th of October 1996, then the signing of the Deed of Settlement at Kaikōura on the 21 November 1997, and the passage of the Ngai Tahu Claim Settlement Act on the 29th September 1998.