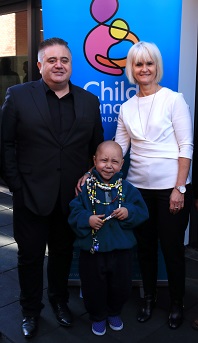 Ngāi Tahu Pounamu announced a significant partnership with the Child Cancer Foundation today, with the launch of a new hand-carved pounamu bead as part of the Beads of Courage® programme, which recognises the strength and courage of each child during cancer treatment.

Three New Zealand children are diagnosed with cancer each week. In recognition of every procedure and treatment each child undergoes, and the milestones achieved, during their battle with cancer they receive a Bead of Courage from the Child Cancer Foundation.

Francois Tumahai, chair of Te Rūnanga o Ngāti Waewae on the West Coast says that hand-carved pounamu beads will be donated to the Child Cancer Foundation each year. The beads will be unique to the programme in New Zealand and will be the first bead a child receives when they are initially diagnosed with cancer.

“As part of the Ngāi Tahu Pounamu Authentication Scheme, each bead has a unique authentication code, which allows the owner to trace the source of their particular piece of pounamu. This is an assurance that each bead is genuine, legally-sourced, New Zealand pounamu from Te Waipounamu,” Francois says.

“Pounamu is treasured throughout New Zealand for its strength and beauty. Because it is regarded as tapu (sacred), and having mauri (significant life force) and mana (status), we felt it was ideally suited to the Beads of Courage Programme.

“The strong spiritual connection many feel with the stone is undeniable. Authentic Pounamu links the wearer to the river in which it was found, the shape into which it is reformed and the identity this shape and stone come to represent. The pounamu bead won’t heal a child of course but we believe it will offer emotional comfort and a sense of belonging,” he says.

The beads have been hand-carved by eight different Ngāi Tahu carvers and in the interests of sustainability, the beads are made from offcuts of the pounamu used for the Ngāi Tahu Pounamu, Waewae Pounamu and the New Zealand Pounamu ranges.

“It’s very important to us to make the fullest and best use of this precious resource,” says Francois.

“It’s doubly rewarding that, through the Child Cancer Foundation, we can be a part of something much bigger – something that supports children and their families as they go through the sometimes gruelling cancer treatment process.”

Utiku Poihakena-Jackson (5) was at the event with his family to receive the first pounamu bead from Child Cancer Foundation and Ngāi Tahu representatives. Utiku is receiving treatment for Lymphoma at Christchurch Hospital, and for his mother, Gina Malcolm, receiving the pounamu bead is incredibly special. 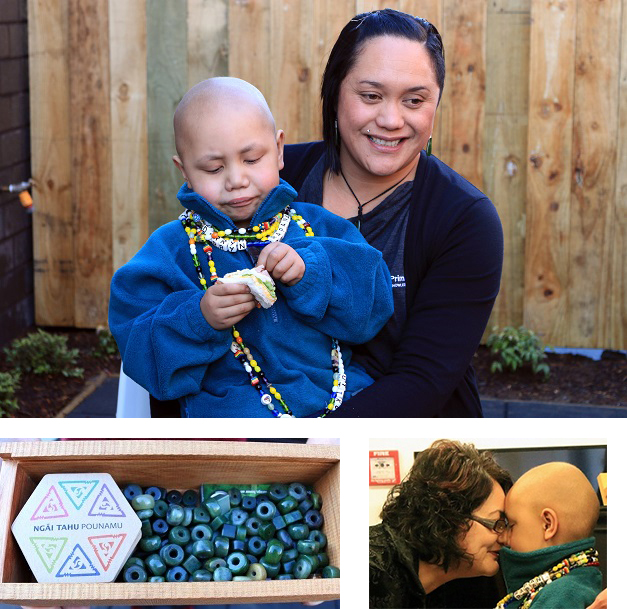 “We are very passionate about our Maori heritage and the cultural and spiritual significance of pounamu,” says Ms Malcolm.

“It is a great privilege to fulfill the purpose of this taonga (pounamu),” she says.

“Pounamu has such strong connections to the land – it grew from nature and is often centuries old. It is an honour to receive this first bead and we are very grateful to all the support we’ve received from the Child Cancer Foundation.”

Waewae Pounamu also placed a large pounamu mauri stone in the new Christchurch Family Place. The mauri stone has been named E tū tamariki toa – Stand tall children, and was blessed prior to be placed in the building.

Child Cancer Foundation Chief Executive Robyn Kiddle says both the mauri stone and the pounamu beads are incredibly significant and special to all New Zealanders and the Foundation is honoured to have been approached by Ngāi Tahu Pounamu to create this special partnership.

“We know that our families will greatly appreciate this unique bead and the meaning behind it. Given the strong Ngāi Tahu connections to Canterbury, it is very appropriate that we are able to announce this initiative during the opening of our Christchurch Family Place.”