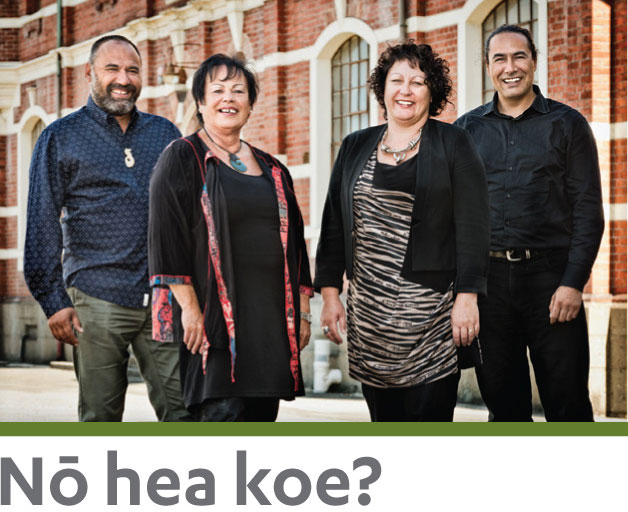 Ōtākou Rūnanga set up A3 Kaitiaki six years ago to work with prisoners at the newly-built Otago Corrections Facility in South Otago.

It approaches rehabilitation by helping Māori men reconnect with their culture and identity. Now the A3 Kaitiaki team is looking to take this programme further. Kaituhituhi Rob Tipa reports.

In the Māori world, a person’s identity starts with the question: ‘Where do you come from?’

For Roera Komene, a frontline A3 Kaitiaki caseworker with prisoners at the Otago Corrections Facility at Milburn in South Otago, the work he does is all about identity.

He says many of the Māori prisoners he works with are lost, stuck in a world of drug and alcohol abuse from a young age and a cycle of offending and reoffending that brings them back to prison.

“Being locked up in a place with gangsters is not conducive to one’s well-being,” says Komene.

Most have only a minimal knowledge of their cultural background, little understanding of who they are and struggle to express themselves on an emotional level.

The only part of the Māori world many relate to is the legendary Tūmatauenga, the God of War, because they see themselves as warriors. Often their prison record reinforces that belief.

With few constants in their lives, many prisoners don’t see a future for themselves outside prison. Some are terrified of being released because of all the responsibilities that go with that – finding a job, maintaining relationships and staying out of trouble.

But the pilot Kaitiaki scheme that has been tried and tested at the Otago Prison for the past five years is working to break down that pattern of reoffending by helping Māori men discover who they are and where they have come from. 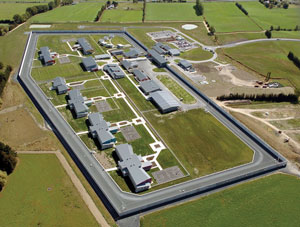 That approach has won A3 Kaitiaki’s pilot Tikanga Māori programme a Māori Business Excellence Award from the Otago Chamber of Commerce for its success in reducing reoffending rates.

A3 Kaitiaki’s kaihautū (operations manager) Michelle Taiaroa-McDonald was asked to set up the company by her Ōtākou Rūnanga before the Otago Corrections Facility opened its doors in 2007.

Taiaroa-McDonald was just 16 when she started her public service career, one of the last Māori and Pacific Island cadets to be recruited by the Prison Service under a Department of Māori Affairs scheme running at that time.

She served 18 years at Dunedin Prison, then decided to take time out to start a family. However, the ideal of life as a stay-at-home mother only lasted a couple of months.

The Department of Corrections approached Ōtākou, as manawhenua, to sound out whether it was interested in working in partnership to reduce Māori reoffending rates.

Because of Taiaroa-McDonald’s experience and understanding of a prison’s primary custodial and public security role, the rūnanga approached her to deliver that programme.

She saw it as the perfect opportunity to work alongside the Department of Corrections to embed a Māori cultural perspective into the new prison before it even opened its doors.

“When this opportunity arose we thought this is our chance to jump in and partner them in building the jail, but we then wanted to get in and work with Māori men on our terms, and that’s pretty much what happened,” she says.
Taiaroa-McDonald knew Māori men were falling through the gaps in the system. For many, she says a prison sentence often multiplied the issues that put them there in the first place.

“I know this isn’t the place to fix the problems, particularly for Māori men,” she says. “This is the place to introduce them to the fix – it’s outside prison and that’s the key.

“All my 25 years of experience working in prisons tells me there’s a huge gap that starts at the front door (of the prison) when offenders are released back into the community.

“That first three months after their release is absolutely critical,” she says. “That’s where things go chronically wrong.”

The pilot scheme is now in its sixth year of operation, an evolution of a relationship built up between the Department of Corrections and Ngāi Tahu that goes back much longer.
Otago-Corrections-Facility-at-Milburn

Taiaroa-McDonald says both parties see their relationship as a ”marriage” built on trust that has evolved over the last nine years.

“We had to be tight,” she says. “We had to guard each other’s backs, trust each other and make sure there were no surprises.”

Otago Corrections Facility prison manager Jack Harrison says A3 Kaitiaki is part of a special relationship developed from day one between the prison and Ōtākou Rūnanga, which was involved in some aspects of the prison’s design.

“It’s a comfortable relationship but one you can’t be complacent about,” Harrison says. “In the initial five years I’m comfortable we’ve achieved a site that is safe in cultural terms.

“I’m certainly confident that prisoners Kaitiaki have dealt with on a one-to-one case manager type role or in the wider delivery of tikanga programmes have had a positive impact.”

After the completion of the first five-year contract term, the focus of the relationship has changed and the scope of the Kaitiaki programme has narrowed to take a more holistic approach with its Tiaki Tangata programme, working on a one-on-one basis with 12 Māori men in its first year.

Harrison says it is still early days to gauge the success of this programme, but he is encouraged by the comprehensive package A3 Kaitiaki had developed under the new contract.

“One of the real positives for this is it will be easier to gauge success or otherwise of this approach than was available to us under the previous approach,” he says.

“We have an overall target of reducing reoffending by 25 percent by 2017, which is pretty much driving everything we do now. This very much complements that.

“The numbers aren’t high but for everyone that doesn’t come back, there are multiple victims that don’t exist. I think it will be a lot easier to measure that.”

The A3 Kaitiaki team’s work has gradually evolved from the initial aim of dealing with all Māori offenders, a task that was well beyond the capabilities of two staff working on site.

Its Tikanga programme is open to all sentenced Māori prisoners and involves a three-day wānaka held in the purpose-built on-site whare, Te Whare a Roko Ma Tane. The group runs four wānaka annually inside the prison and two at Ōtākou marae for offenders on a community-based sentence or on parole from prison.

This programme gives offenders an introduction to the foundations of Māori tikanga and is aimed at igniting a spark that leads to cultural well-being and a crime-free lifestyle.

When prisoners are released they are encouraged to attend another wānaka at Ōtākou marae, where they are presented with a symbolic pounamu pendant engraved with an ancient image of Māori rock art. It is an inspired symbolic gift to remind them of who they are and their responsibilities to themselves, their whānau, hapū and iwi.

The new Tiaki Tangata programme is designed to be more intensive, emotionally challenging and mind shifting for 12 Māori prisoners who are motivated to make some real changes in their lives.

The goal is to work intensively one-to-one with these prisoners and support them after their release, particularly in that critical first three months.

As Roera Komene explains, it helps offenders peel back the layers of their past, unload some of the baggage they are carrying, and drop their masks.

“I’ve seen some incredible transformations starting from sowing that seed of wonder, but they are few and far between,” he says.

“It’s great to see people set off on that journey.”

Case workers discuss personal development plans with offenders before their release and follow up on these outside the prison walls. They also meet with prisoners’ wives and family to resolve any underlying issues.
Otago-Corrections-Facility 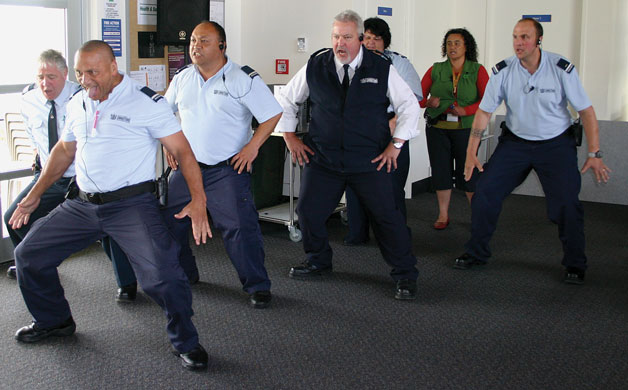 Michelle Taiaroa-MacDonald says no other programme follows prisoners right through the system and supports them this intensively through the vulnerable period immediately after their release.

It is still early days for the Tiaki Tangata programme, but there are some promising signs.

“To date we have three men in the community who to be fair would normally have come to the attention of the police by now historically,

if not already back behind the wire,” Taiaroa-McDonald says.

The main focus post-release is to encourage offenders, where appropriate, to undertake a two-year residential drug and alcohol programme run by Moana House, a programme regarded as one of the best in New Zealand, if not Australasia.

A3 Kaitiaki also works closely with all divisions of the Department of Corrections, the New Zealand Police, Child, Youth and Family, Work and Income, Inland Revenue, and nine contractors that run its programmes.

A3 Kaitiaki has just hired another staff member, former corrections officer Anaru Phillips, to work on site as a caseworker with prisoners. His role will free up Roera Komene to support prisoners after they are released back into the community.

The third member of the team is Anne Robertson, a highly skilled public service administrator who Taiaroa-McDonald asked to come south when the company was formed.

Measuring the success of the A3 Kaitiaki Tikanga Maori programme isn’t easy because the Department of Corrections doesn’t keep track of prisoners who have been released. It only has the ability to recognise those who come back into the system, in other words, if they offend and return to prison.

The rewards for A3 Kaitiaki staff are the random occasions when they are stopped in the street or in the supermarket and told by a graduate of their Tikanga programme that they have not offended or touched drugs since they left prison.

In five years’ time Taiaroa-McDonald would like see the group double the numbers of offenders it puts through its pilot Tiaki Tangata programme, from 12 to 24.

She believes that aim is achievable, and she would like to see the same model replicated by other rūnanga in Te Waipounamu and throughout the country.

“We can raise the bar a lot higher,” she says. “We’re riding ponies at the moment.”