Opportunity of a lifetime

The whakataukī “E rere te huata, kapohia!” is about making the most of every opportunity. It is belief in this mantra that has driven Mahaanui Kurataiao Ltd Kaihautū, Tania Wati (Ngāi Tahu – Ngāti Kūri, Ngāi Tūāhuriri) to seize every chance that comes her way.
Kaituhi Alice Dimond reports. 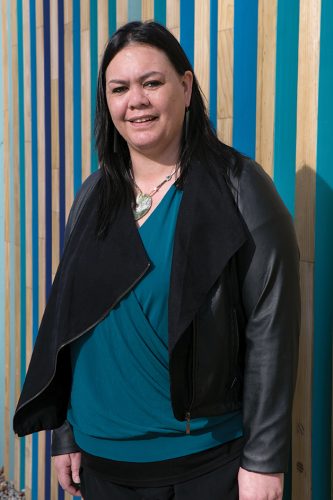 “Never turn down opportunities with a good kaupapa. You may be full on at the time, but if you believe within yourself that it is a good kaupapa, do it. These experiences will teach you everything,” says Tania.

Tania’s road to her current role hasn’t been a traditional one, but the unconventional nature of her journey makes it all the more impressive. “I can honestly say working in a marae kitchen has got me to where I am today” says Tania. “I met so many people cooking in the marae kitchen … it taught me the fundamentals of how people work, not to mention good time management.”

From the age of one, Tania was placed in various foster homes, which she sees more as a privilege than anything negative. “I was hand-picked by different families to be a part of their lives, and was able to learn a lot of different whānau values from that,” she says.

Eventually she settled in Kaikōura with her mātua whāngai (foster parents), Maurice and Heather Manawatu. Without their generosity, Tania’s life might have turned out very different. She calls them her “rocks” and says that they have made her the wahine she is today. “They taught me a lot about values and making values-based decisions,” says Tania. “Our whānau has our own set of values. Number one for me would be manaakitanga – that is first and foremost. Then whanaungatanga, aroha ki te tangata, doing things that are tika or correct, and mana. But mana is not about holding status – instead it’s about giving status to others.”

Moving to Invercargill for her high school years, Tania says she was “highly influenced” by her friends, and ended up dropping out at the age of 15. After two years of working, her parents managed to convince Tania to return to school in Kaikōura. “They said I needed some sort of education, so I went back as a return fifth former.

“I did alright and ended up passing most of my School Cert subjects, mainly because some of my teachers said I couldn’t, so I wanted to prove them wrong,” laughs Tania. “I was very competitive, especially against myself.”

After high school Tania worked as a logger in Rotorua for six years. “While in Rotorua I lived in Whakarewarewa village around the pā. I learnt a lot of cultural history and values while being surrounded by different whānau and friends. Forestry taught me a lot about work ethics.”

Eventually, Tania headed back south to work in her parents’ tourism company, Māori Tours Kaikōura. In 2010, she left Kaikōura for Christchurch with her two children, Miharo, 13, and Nikora, 10. Her move was motivated by a desire to give her children more opportunities to learn te reo Māori. She enrolled them at Tuahiwi School and found a job as administrator at Tuahiwi Marae.

Seeing potential in Tania, Eruera Tarena (Kaihautū of Te Tapuae o Rehua) asked her if she would be part of a cohort supported by Ngāi Tahu to study towards a Bachelor of Business Management through Otago Polytechnic. Again not letting a good opportunity go to waste, Tania took up the challenge, despite being nervous. “It all seemed too academic for me at first, because I had been out of school for so long,” she says.

Tania believes obtaining this degree was fundamental to her getting her current role. “People always said I had heaps of skills and a great work ethic, but I could never progress beyond that. Since getting the degree, doors have opened. It’s crazy that having a piece of paper has helped that much because I used to think it was just that, a piece of paper; but now I know.” 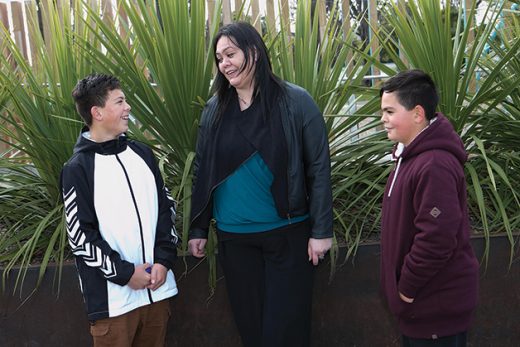 Tania with sons Miharo and Nikora.

Having this insight, Tania intends to carry on with higher education when she has the chance, and would eventually like to study towards a Master’s degree. “I want to keep studying so that I can teach my children that this is normal, to make continued learning a normality.”

It was while in her role at Tuahiwi Marae that the opportunity of a lifetime came for Tania when she was encouraged to apply for the role of Kaihautū/Chief Executive of Mahaanui Kurataiao Ltd. Mahaanui Kurataiao Ltd is an environmental management advisory company established to assist and improve the recognition and protection of tangata whenua values in the area. “At the time I didn’t really think about the position, it was more about the kaupapa for me,” Tania says.

Tania was successful in her application and took up the position in June 2015. “Before I went into the role I didn’t know much about environmental management, but that wasn’t deemed an issue as the initial focus was on change management and leading positive change.”

Tania’s natural relationship-building ability equipped her well to lead this change. Through volunteer work in marae kitchens, Tania says she learnt how to manage people. “I used to always say it is easier to work with volunteers than paid workers, because you know volunteers are there for the kaupapa – because they want to be there,” says Tania. It is her mission to create a team and a culture at Mahaanui Kurataiao Ltd that shares a vision and belief in the kaupapa.

“I know we are doing our job right when we are getting positive feedback from rūnanga. I care what our people think and I care that we are able to take the pressure off our marae offices by looking after environmental matters on their behalf.”
Tania Wati (Ngāi Tahu – Ngāti Kūri, Ngāi Tūāhuriri)
Mahaanui Kurataiao Ltd Kaihautū

Tania’s strong whānau values have always driven her approach to her work, and made the transition into her current role easier. “We run under the Ngāi Tahu values and because they are very similar to my own whānau values, I found it easy to apply them to this job.

“My decisions are always value-based, so even if it may not be the best business decision, if it falls under one of the values I will do it. Some of the team are a bit cheeky, they are like, ‘Oh yes, we can go home at 3pm – that is whanaungatanga,” laughs Tania. However, making values-based decisions assures her that she has made the right choice. “If I can tick through at least four of the values on any decision I have made, then I know it is correct. If I can’t, then I know maybe it is not the right decision.”

Kaitiakitanga or guardianship of the environment is the value at the core of Mahaanui Kurataiao. Established in 2007 by the six Canterbury papatipu rūnanga, the company aims to assist ngā rūnanga to achieve their objectives and aspirations for environmental management in their takiwā. “It’s about supporting and enabling them to have their voice at the table,” says Tania. “We do not speak on behalf of ngā rūnanga, we advise and advocate on their behalf.”

Tania believes the success of Mahaanui Kurataiao is measured by having happy rūnanga. “I know we are doing our job right when we are getting positive feedback from rūnanga. I care what our people think and I care that we are able to take the pressure off our marae offices by looking after environmental matters on their behalf.”

Tania remains very humble about her position, saying she is there to serve her people. “I am a servant of the papatipu rūnanga.” She also credits the support and aroha of the many people who have supported and encouraged her to seek opportunities and give life her best shot. “I have been very fortunate to have the support of some amazing people throughout my life – way too many to mention by name – people who have believed in me and been there for me along the way.”

Humility was a quality instilled in her at a young age. “Dad taught me about staying humble and that a lot of the time you don’t actually need to talk, you just need to listen, even if you want to get your point across. He would always say, ‘Remember to keep their mana intact, it is not just about yours. Don’t give yours away but keep theirs intact at the same time.’”