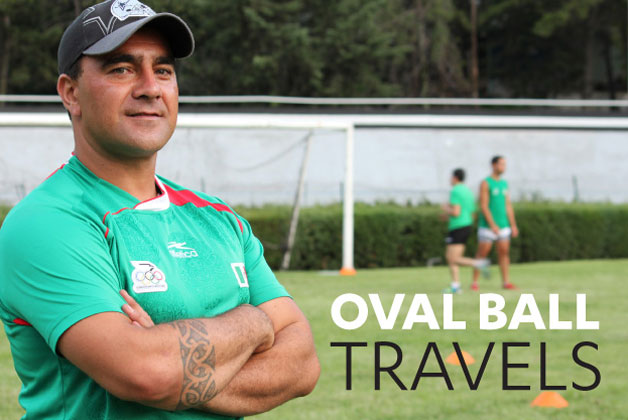 Rugby has taken Tamaha MacDonald from Blenheim to Mexico City, population 22 million. Kaituhituhi Ila Couch travelled to Mexico to discover how Tamaha has adapted to the language and culture of his new home.

Tamaha MacDonald weaves through five lanes of traffic on his way to train Mexico’s national rugby team. “I refused to drive when I first got here, but my wife’s advice was drive flat out and give way to nobody,” he says.

“It’s a bit of a free-for-all but you’ve got to get yourself in there. If you hesitate you’ll get stuck ‘cause no-one will let you in.”

Security is tight at the Committee Olympico Mexicano in Mexico City. It was built for the 1968 Summer Olympics and there is no official rugby field inside the complex. In a country where soccer rules and rugby is barely on the national radar, just finding a place to practise is an accomplishment.

More than one guard asks us what we are doing and in Español (Spanish), Tamaha explains he is the national assistant rugby coach and that I am a periodista (journalist). Satisfied, the officials let us on to the velodrome where Tamaha sets up training equipment in the centre field.

Groups of young men arrive, laughing and throwing a rugby ball between them. Tamaha is greeted with hugs and kisses, as is customary in Mexico.

“All my life what I always wanted to do was play rugby, but I never in my wildest dreams thought I would be coaching here in Mexico.”

The highways he traverses now are a world away from the quiet country road to Awarua Park near Blenheim, where he played his first rugby game at the age of five.

The only son of Kaye (Ngāi Tahu – Ngāi Tūāhuriri, Ngāti Apa) and Tangi MacDonald (Rangitāne), Tamaha was the older brother to three sisters and spent his formative years at the Moutere Rugby Club in Spring Creek, north of Blenheim. Established in 1906, “the family club”, as Tamaha calls it, is the most successful rugby club in Marlborough.

Tamaha showed early promise and was selected for Marlborough primary school representative teams. Later, he played second-five for Marlborough Boys’ College 1st XV and was picked for the Marlborough under-18 development squad. Then, at 16, Tamaha became an exchange student.

“Mum and Dad would tell you I’ve got ants in my pants. Part of the reason I wanted to go to the USA was to experience life in a big city. I had pictured somewhere like LA or Chicago.”

Instead he landed in the small town of Beloit, Kansas (population 4,000). “That year away is when I started appreciating living in another country and experiencing another culture.” On a return trip to America, 18-year-old Tamaha looked for ways to combine his two interests. “I went for a holiday to visit friends and made a call to the Shreveport Rugby Club in Louisiana. I got hold of the coach there and said, ‘I’ve never been down to this part of the country and I’d like to come and play rugby’.” Not only did the club pick him, it also organised his accommodation.

At the end of the season, Tamaha headed back to New Zealand to complete a Bachelor of Arts majoring in Community and Family Studies at the University of Otago. Then, for the next few years, it was back to rugby with the Counties Manukau and second division team. There was further opportunity for travel when Tamaha was invited to play for Plymouth Albion RFC in the United Kingdom, and then Marlborough’s NPC team and a career high point – winning a Moutere club final during its centenary year. “That is one of my favourite-all-time rugby memories.”

After a string of injuries, including a broken leg and arm, Tamaha reached out to the Sunshine Coast Club in Queensland. “I had been there the year before on holiday, and thought I’d love to go and play my last year of competitive rugby there.”

At the end of the season, he met Jennifer, a striking Mexican woman working in Sydney as a brand manager for a major UK company. 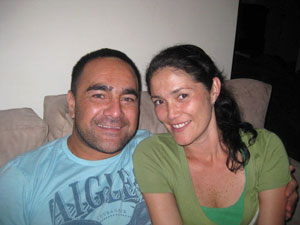 “We hit it off straight away. I moved to Sydney to be with her and invited her to come home with me to New Zealand. We got married in Blenheim, and after we finished our three-month holiday we went to Mexico.”

Mexico was meant to be a stopover to meet the family before travelling on to London, where Jennifer had been offered a job. But as they waited to hear word of a start date, it became obvious the position was not going to come through.

“She asked me how I felt about being here in Mexico and living here. I told her I loved it. I loved the culture, the people, the food.” Jennifer encouraged him to get in touch with a contact she had in the Wallabies Rugby Club but, unable to stomach the idea of playing for a club with obvious Australian connections, Tamaha began his own search on the Mexican Rugby Federation website.

The first club he came across was Black Thunder Rugby Club. As it turned out, not only did Black Thunder not have a coach for their under-19 team, but two of the team members had fathers who were on the Mexican Rugby Federation committee. “The two guys I met with were connected to coaches at the Mexico national level. They introduced me to the team and said, ‘You’re it, you’re the coach’.”

Tamaha is now head coach for Black Thunder Rugby Club and assistant coach for Mexico’s senior team and under-19 team.

At the end of last year he was also invited to coach three sessions with the Guatemala under-19 team and senior team.

“I just feel like it’s the right time for me to be here and involved with Mexican rugby. I know I have rugby knowledge that I can share and pass on to these guys.” 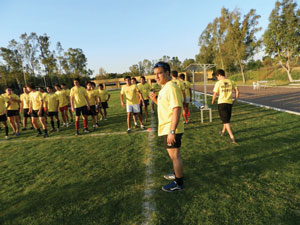 As for learning Spanish, Tamaha describes his progress as slow but steady. He lives with Jennifer, mother-in-law Marcella and nephew Chobly, who all only speak Español at home. “It was very difficult at first and a little frustrating, because I had no idea what they were talking about.

“When the family get together, they talk fast and they talk loud. It’s the Mexican spirit, not just my family.”

Tamaha sees similarities between Māori and Mexican culture. “Family is the most important thing here. The lifestyle though is completely different. I call it organised chaos.”

Back on the field Tamaha talks the team through their drills, switching between English and Español. Most of the players were introduced to rugby through international schools, but Tamaha’s dream is to introduce the sport to all children.

“Soccer is the number one sport here and that will never change, but the dream is to help grow rugby to where it is played in primary schools and colleges just like it is in New Zealand. That’s a long way off, but you’ve got to have those sorts of goals and ambitions because if you don’t, the sport won’t grow.”