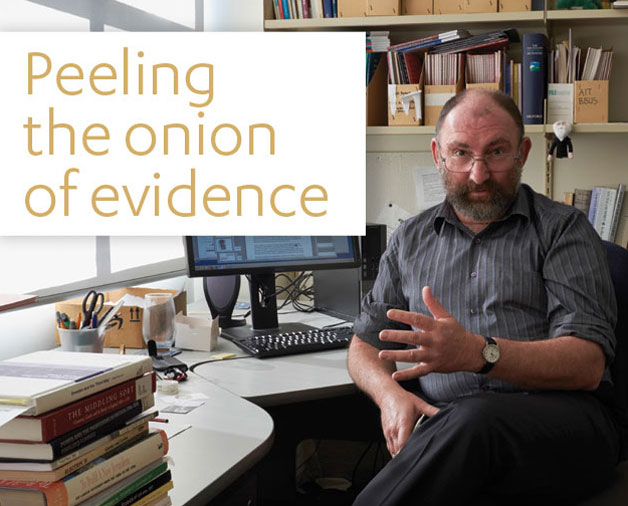 During the Waitangi Tribunal hearings into the Ngāi Tahu Claim, three historians played an integral part for Ngāi Tahu. Where are they now? Kaituhituhi Mark Revington meets Jim McAloon, the youngster of the trio.

In many ways it may have been the making of the young historian. Three years plus in the hothouse atmosphere of Te Kerēme, and the Waitangi Tribunal hearings that would deliver the Ngāi Tahu Deed of Settlement and end more than 150 years of petitioning the Crown.

Jim McAloon was young, passionate, and bearded, and there as part of a trio of historians who played an important part in securing justice for Ngāi Tahu. 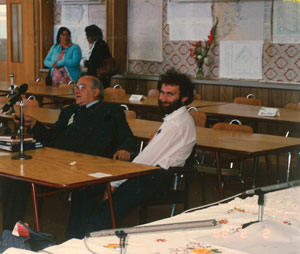 “If I could take you back to a hearing on the West Coast, Willie Young QC was the opposing lawyer representing the leaseholders on Māwhera, and he and Jimmy crossed swords in a huge way. In the finish, Willie stomped off and said ‘I’ve had enough of this’. Jimmy took him in circles and actually left him for dead. It was a lesson in what I felt was, ‘well Mister, you might have the training as a lawyer but Jimmy had the facts and he was sure of his ground’. The group had a bit of a party that night because we demolished the leaseholders and the Crown.”

Uncle Trevor says when he first laid eyes on Jim McAloon, he remembers looking down the table and wondering ‘who is that wild prick?’ He reckons McAloon “saw the world through different eyes to a lot of people.

“But the hardest job I had with Jimmy was to get him to put a tie on for the first hearing. Then he wore the same tie through all the hearings and we took it from him on the last day.”

Ngāi Tahu chief negotiator Tā Tipene O’Regan remembers McAloon as a “somewhat puckish young man with a jutting beard and an enthusiastic glint in his eye.

“I was always impressed by the level of unvarnished delight he had in winning a point or uncovering a profound irony in the Crown position”.

These days Jim McAloon is Associate Professor of History at the University of Victoria in Wellington where he has a book-lined office that catches the late morning sun. And he still has that beard. 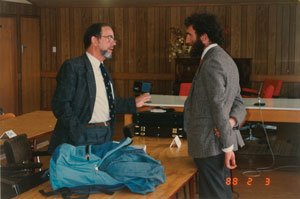 His biography on the university’s website includes the phrase: “I have also had some experience in Māori land issues, particularly with reference to the South Island.”

After working for the Ngāi Tahu Māori Trust Board, McAloon completed a PhD at the University of Otago, a study of settlers who became rich during the 1890s, essentially a generation removed from those who directly benefited from the theft of Ngāi Tahu land. McAloon says he has always been interested in economic and social history but didn’t want to complete a PhD on the Ngāi Tahu Claim because he didn’t have the necessary skill in te reo Māori.

He moved to Wellington after 15 years at Lincoln University. He is widely known as a historian, the author of No Idle Rich: the Wealthy in Canterbury and Otago 1840 -1914, which won the history section in the 2003 Montana NZ Book Award while his history of Nelson was joint winner of The JM Sherrard Award in Regional History. He has contributed chapters to a number of books, written and published countless papers, and is highly respected as an authority on social, political and social developments in New Zealand.

But it is his role in making history while working on Te Kerēme that is of most interest here. In accounts of the Ngāi Tahu Claim process, the name of Harry Evison looms large. But two other historians – McAloon and Ann Parsonson – played an important part, researching and providing essential evidence.

In retrospect, McAloon is modest about his contribution. “Harry and Ann were both much more experienced than me,” he says. “I certainly learnt a lot working with them.”

Uncle Trevor and Tā Tipene remember Jim McAloon as the historian who wrote crucial reports on the Māwhera land leases, the Arahura purchase, and Murihiku, and would later provide essential mahinga kai evidence.

McAloon quickly showed his value to Ngāi Tahu with a talent for combing through vast amounts of source material at great speed and pulling it together into a coherent thread.

“Jimmy did his homework,” says Uncle Trevor. “If there wasn’t a document, he wouldn’t present it. He was tenacious. He would go as far as he could to uncover facts and build a solid foundation.

“Harry and Jimmy together were a huge force. The Crown didn’t really question Harry’s evidence to a large degree and I think he was a good steadier for Jim but Jimmy had a mind of his own. He just took everything in his stride and what got in the way, he knocked down.”

How did the young historian come to work for Ngāi Tahu? By chance, says McAloon.

He had completed a master’s degree at the University of Canterbury in 1986 with a thesis on the Labour movement before World War One and then worked as a research assistant at the University of Otago, before returning to Christchurch at the end of 1986. There he fell in with Project Waitangi, set up by the National Council of Churches to facilitate Waitangi Tribunal claims.

The Ngāi Tahu Māori Trust Board needed historians but how to fund them? Through outside sources, as it happens. Ann Parsonson was funded by the University of Canterbury, Harry Evison by the Waitangi Tribunal and Jim McAloon initially by the Waitangi Project.

“We were desperately looking for a historian who would take on the Murihiku and Poutini sides of our case,” Tā Tipene remembers. “We had divided the Ngāi Tahu Claim into what we would call the nine tall trees and Jim McAloon came to us as a gift funded and supported by the National Council of Churches.

“I knew nothing of him but one of the people who endorsed him to me was Harry Evison. I chuckled and teased Harry a bit that he would have an ally coming out of the order of belief but Jim turned up and he was bearded and bushy, he had a light in his eyes and I think our guys rather liked the look of him. We weren’t that sophisticated in those matters, we weren’t conducting highly developed interview formats.

“The real point about Jim McAloon was his enthusiasm and his vigor. He got on like a house on fire with Harry, and he had the whole Murihiku, Rarotoka Island, and Rakiura… all those purchases on his plate and the Arahura Westland purchase, and his services would continue right on through the processes of the ultimate Te Tau Ihu claim as that involved the top end of Te Tai Poutini and the Arahura purchase.”

It was a working relationship that was of huge benefit to Ngāi Tahu as the tribe worked through the claims process. For McAloon, it was an eye-opener, a feeling of breaking new ground. It also came during a time of real change for New Zealand. It was five years after the divisive 1981 Springbok tour and three years after then Prime Minister Rob Muldoon called a snap election and lost, ushering in a Labour government led by David Lange and the years of Rogernomics. New Zealand was slowly moving towards a more Treaty-based society and McAloon, who had been involved in the anti-tour movement and the peace movement, says there was growing awareness of the importance of land issues. “For better or worse, New Zealand’s landscape was changing,” he says.

Memories? He remembers eating tītī and swede at Bluff. “Talk about a bicultural experience,” he says. He remembers mountains of original documents to trawl through, and always the feeling of being in a rush while compiling reports for Ngāi Tahu’s chief counsel, the late Paul Temm QC. He remembers the care and friendship from kaumātua as the hearings unpeeled more and more of the onion of evidence. He remembers the trust placed in him by Uncle Trevor, Tā Tipene and Rakiihia Tau Snr.

“I did what I could,” he says now, “but I was very much the junior member of the team. I was 25 when I joined. It was amazing.”

McAloon says he had always been attracted to history, even as a young boy. And he found he was good at it. “I followed my nose and studied history at university.” He now says he thinks the role of historians is “to complicate things”. He’s only half joking. Since his time with Ngāi Tahu, he has answered criticism from Giselle Byrnes and historian and poet, Professor Bill Oliver, who accused the Waitangi Tribunal of ‘presentism’ and said the tribunal’s conclusions created “a retrospective utopia”.

McAloon passionately rebuts the charge. His time working for Ngāi Tahu taught him that Māori often view history through a different lens. New Zealand as a society is still coming to terms with its colonial history, he says.

“The positive thing about the last 30 years is change. There isn’t a single orthodoxy about our past and there will always be debate, which is healthy. Historians can inform that debate.”

“Ultimately they showed us how we had been dispossessed and that is part of the process of building towards repossession. I think that is one of the reasons why we owe a debt to them.” 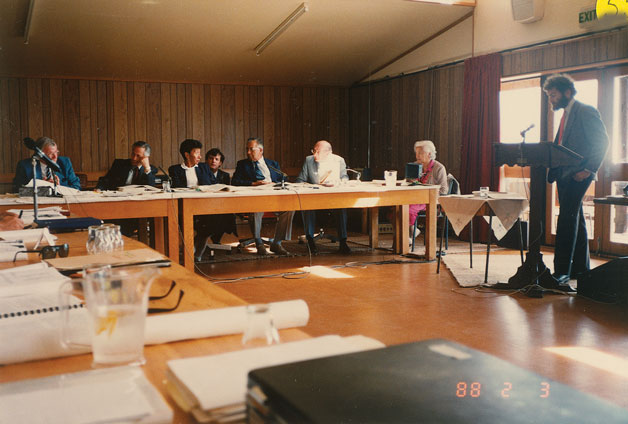 Jim McAloon presents evidence to the Waitangi Tribunal at Te Rau Aroha Marae, Bluff, during a hearing in February, 1988

McAloon, says Tā Tipene, “had a particular capacity for going on highways and byways. There was a lot less written evidence in Te Tai Poutini and Murihiku than there was for Ōtākou for example. Jim had to work with original documents, which was extremely challenging”.

And, as Tā Tipene points out, the three historians were not only confident in the material they prepared, they were regularly cross examined by Paul Temm during his preparation. “Facing Temm was much harder than a battery of Crown QCs.”

Tā Tipene estimates the Crown had up to 27 bureaucrats installed in a suite of offices in Featherston St in Wellington to try and beat Te Kerēme.

“And they then brought down a very senior QC from Auckland to sit on full fees day after day after day. I can remember one morning at Tuahiwi there was myself and Paul Temm and David Palmer sitting in a row. So there was myself, Knowles and Palmer under the leadership of our senior counsel Paul Temm and the Crown in one form or other had I think 37 or maybe 38 fully funded legal personnel from different SOEs, as well as lawyers from Federated Farmers and other things. In terms of balance against the Crown, we were right up against it.”

McAloon may have been the junior of the triumvirate of historians the tribe relied on, but he was no less loved and respected, says Tā Tipene.

“Because they were our historians, they were taken under the wing of our people. When you stood in front of the Tribunal, you always felt you had your back well and truly covered.”