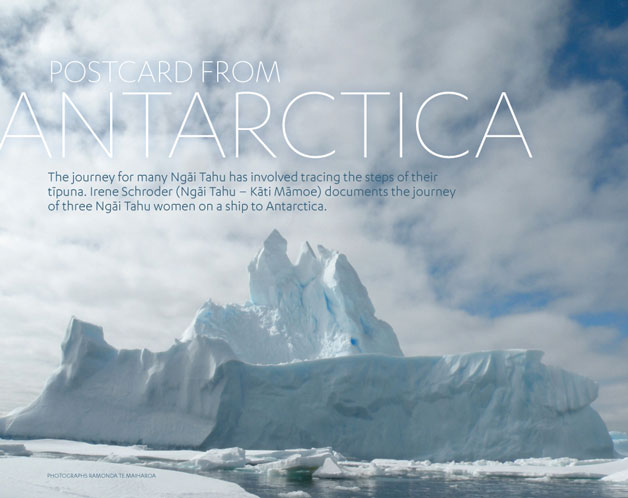 Why would three women want to go to Antarctica? I asked myself this question as my companions and I spent the first day at sea lying on our bunks, feeling seriously unwell.

Ramonda Te Maiharoa (Waitaha – Kāti Māmoe), her sister Dian Munt (Waitaha – Kāti Māmoe) and I had been planning this momentous journey for two years. Our paramount wish was to voyage the same southern seas as our fathers. A further motivation for me was to reach the Ross Sea as my father had in the 1930s, but I was unprepared for information I found in the ship’s library later in the voyage. My great-grandfather William Timaru Joss had been part of the first known landing party on the Antarctic continent in January 1895. 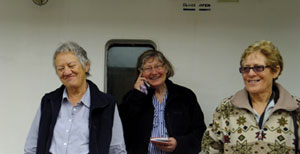 We left the port of Bluff at 12.15am on 14 January, on the Spirit of Enderby, for a 28-day expedition to the Sub-Antarctic Islands, the Ross Sea and the continent of Antarctica. The Southern Ocean lived up to its reputation. Over the next 36 hours, our vessel punched its way through a strong southerly, so it was a relief to everyone when we finally dropped anchor in the shelter of Port Ross, Auckland Island.

It was a perfect day for our first landing in the zodiacs: fine with a few showers, no wind, gentle surf and a lovely sandy beach. Sandy Bay on Auckland Island is home to the world’s largest colony of Hooker sea lions. With newborn pups and mating adults, there was action in every direction. The boardwalk took us through low-growing vegetation including flowering rātā and exotic megaherbs. We were delighted to see yellow-eyed penguins, petrels, prions, shags and skuas. The light-mantled sooty albatrosses were especially beautiful, flying gracefully in pairs over the cliffs.

Later that evening, one of the Heritage staff had to be evacuated for medical reasons, making us more aware of the distance from hospital facilities. Fortunately we were still in helicopter range of New Zealand, and the patient was flown to Invercargill. Events of this nature highlight the progress made in communication and transport since those heroic expeditions of Roald Amundsen, Robert Falcon Scott and Ernest Shackleton and their race to the South Pole 100 years ago. 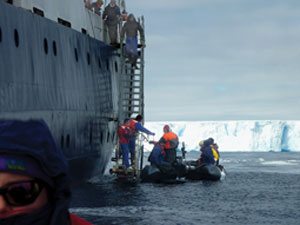 Landing by Zodiac from the Spirit of Enderby

To date, there have been no lasting successful settlements on the Auckland and Campbell Islands. That people visited part of the Auckland Islands more than 600 years ago has been proved through carbon-dating charcoal remains and middens of artefacts, fish and bird bones found at Sandy Bay. Erebus Cove was the site of the ill-fated settlement of Hardwicke on Auckland Island in 1849. The settlement failed to thrive in the harsh climate, and closed within three years. All that remains now is a tiny cemetery.

Back on the ship, we settled into the rhythm of the expedition. Passengers were welcome on the bridge with lectures held on the second level. The bar in the lounge/library provided a quiet place to mingle with the other passengers before dinner and proved a conducive place for the Spirit of Enderby choir to entertain, with Dian very ably representing cabin 321.

The next port of call was another Sandy Bay, this time on Macquarie Island. Macquarie is nicknamed ‘The Sponge’ by research base staff because of its high rainfall and soggy bogs. Spectacular colonies of Royal and King penguins ignored the clusters of elephant seals lolling among them, just as they ignored 50 strange two-legged creatures landing on their beach. We also enjoyed a close-up view of the Lusitania colony of King penguins from our zodiacs. There were thousands packed onto a narrow strip of steeply sloping pebble beach – an amazing sight. 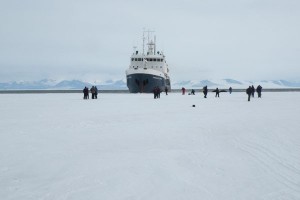 The Spirit of Enderby on the ice

Heading south once more brought us across the Antarctic Circle at latitude 66° 33’S and longitude 176°15’E at 2150 hours on 22 January. A ceremony was held on the forward deck, with mulled wine, the stamp of the penguin on our foreheads and two loud blasts of the ship’s horn. The softly falling snow, flat sea and lack of wind were much appreciated. This is a sharp contrast to the wording on our precious certificates, signed by the Expedition Leader and the Spirit of Enderby Captain: “Endured the extreme privation of the Southern Ocean, the rigours of the Roaring Forties, the foaming seas of the Furious Fifties, to the ice strewn paths of the Screaming Sixties in the Antarctic Ocean”. This certificate, issued at the end of the voyage, also records our southern-most latitude of 77°43’S and longitude 166°11’E; “Reached by the above mentioned, hardy and well-proven shipmate, On board the Polar Research Vessel Spirit of Enderby 28th January 2012 at 1200 hours”.

The next day, we navigated the first of several zigzag courses through the pack ice. Although the Spirit of Enderby has a double hull, it is not an icebreaker; and finding our way through this dense ice needed all the captain’s skill and experience. 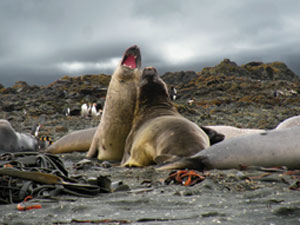 We sighted Cape Adare three days later, having made slow progress through the ice surrounding the entrance to the Ross Sea, only to find that heavy pack ice made it impossible to land at Robertson Bay. My great-grandfather William Timaru Joss was part of that first known landing at Cape Adare in January 1895. He and three other Stewart Islanders, George Lonnecker, Georges Chevalier and Alexander von Tunzelman had been taken on as crew on the whaler Antarctic when it called at Rakiura (Stewart Island).

We were now experiencing typical Ross Sea weather with a heavy swell, wandering ice, waves frequently breaking over the bow and sheets of spray hitting the bridge. There was great excitement on board as we neared the historic bases of Scott’s Terra Nova (1910-1913) expedition, and Shackleton’s Nimrod (1907-09) expedition. We were supplied with heavy blue jackets to combat the cold. Just as penguins of the same species look very similar to us, we probably all looked the same to them in our bulky blue jackets. Only the odd scarf gave a clue to the person’s identity, as all body parts were well covered including noses, mouths, and eyes protected by sunglasses; partly because of the cold and partly because the sun does not set in summer at this latitude. There wasn’t much space left in our cabin once the three of us were dressed in our Antarctic gear. We looked and felt like Michelin Men. 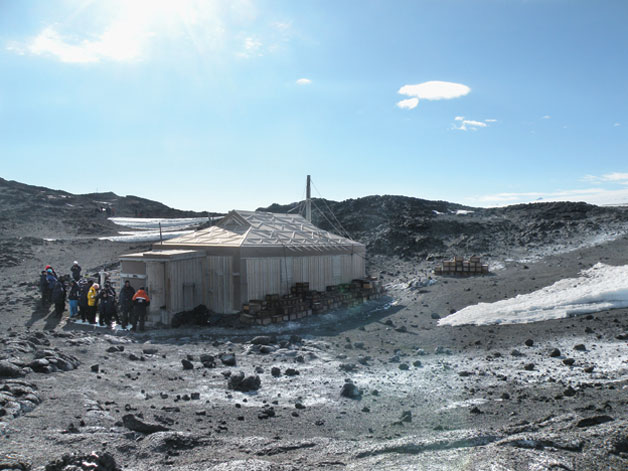 Spirit of Enderby was the first of this summer’s tourist boats to successfully negotiate the pack ice and reach Cape Evans, at the entrance to Erebus Bay on Ross Island. Mount Erebus, with its occasional puff of steam, made a dramatic backdrop to Scott’s hut, base camp for the British Antarctic (Terra Nova) Expedition. It felt overwhelming to enter the hut, home for the 25 members of this tragic venture. The scientific research was successful, but overshadowing that were the deaths of Scott and his four-man team on their return journey from the South Pole. The hut offered a chance to acknowledge the bravery of these men and admire their tenacity. A surprise was waiting for us: we met Falcon Scott, grandson of Robert Falcon Scott. Falcon had travelled from England to be in his grandfather’s hut, 100 years after that momentous expedition.

We landed at Shackleton’s Cape Royds hut on 28 January. Erected in 1908, it is smaller than Scott’s Terra Nova hut, and wired into the ground. Inside both huts it is as if time has stood still: the presence of Scott, Shackleton and their brave and valiant men was pervasive. I felt privileged to be there. 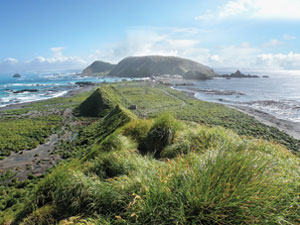 A zodiac excursion to Cape Bird and the Adélie penguin colony and a walk on the sea ice were our last experiences on the Ross Ice Shelf. The captain had nosed the prow of Spirit of Enderby into the ice, enabling us to step directly on to it.

Landing on the continent of Antarctica was our next adventure. First, a zodiac landing on to the rocks at Inexpressible Island, where Scott’s Northern Party under Lieutenant Victor Campbell unexpectedly spent the winter in an ice cave. I had followed the journey of these men in a recent study of their diaries by Meredith Hooper, and was quite moved to be in this place. The name of the island said it all. 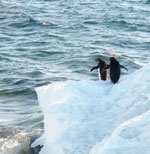 Penguins on an ice flow

We sailed on, turning to the north, with the sun still not setting. The Ross Sea was so calm it was unbelievable, and the mountains of Victoria Land showed up clear, white and majestic on our port side. We made a landing at the German base and enjoyed the tranquility of our last morning in Antarctica. We made one last zodiac trip around some awesome icebergs, capturing our final images of the south. It was time to leave the Ross Sea, navigate our way through the pack ice and head for Campbell Island, our last port of call. Then, back to Bluff. I may not have uncovered details of my father’s adventure, but now I know he was following in the footsteps of his grandfather, William Timaru Joss.