Postcard from the Pacific 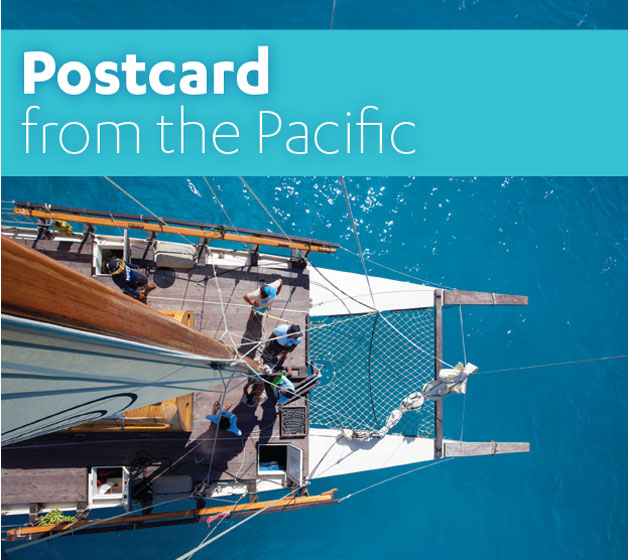 For two years, Te Mana o te Moana fleet of seven waka sailed on an amazing journey. From Tāmaki-makau-rau, Aotearoa, the fleet sailed to Tahiti, Hawaii and San Francisco, down to the Galapagos Islands. Next was French Polynesia, the Cook Islands, Samoa, Fiji, and Vanuatu, and then the Solomon Islands for the 11th Festival of Pacific Arts in July, before sailing back to their home islands.

In times long ago, the great Pacific ancestor and navigator, Māui, went fishing with his brothers. Using the enchanted jawbone fish hook given to him by his grandmother, he pulled up a giant fish. Māui left the creature in his brothers’ care while he went to appease the atua. While he was gone the brothers greedily slashed at the fish’s back, dividing the flesh between themselves. Māui returned to find a dying fish, and desperately began a karakia calling upon the atua to help heal the creature. They sent trees, plants and animals to dress the gashes, and fresh water to cleanse the wounds. This is how Te-Ika-ā-Māui, the North Island of Aotearoa, New Zealand came to be.

We told this version of Māui and Te Ika to children in ports around the Pacific during stops on our way back from the United States. They sat on the deck of our canoe Te Matau ā Māui their eyes bright and faces lively, leaning in to listen to this legend about an ancestor famous throughout the Pacific. As we recounted the story, they would join in, acting out different parts, helping the determined Māui pull in Te Ika, slashing away with imaginary paddles and shutting their eyes in karakia to invoke the atua.

When the laugher settled, we’d talk about the metaphors within the story: the grandmother’s lower jaw, Te Kauae-Raro, representing earthly knowledge; the fishing – a metaphor for navigation and land-finding. Māui threw his fish hook far over the horizon to catch and pull in islands all across Te Moana-Nui-ā-Kiwa, the Pacific Ocean. After weeks out at sea, we too, watched islands slowly rise up from the water like great fish. It was a glimpse into the world of our ancestors.

We’d then ask the children what we could learn from this old story, and how it related to the challenges their communities and islands are facing. This story was a powerful reminder to us all that humans have been struggling to live in harmony with each other and the natural world for thousands of generations. Our ancestors wove messages into their stories to transfer knowledge, ethical and moral codes to their descendants. In this story, Maui’s brothers teach us the dangers of greed and disrespect for protocol – by taking too much, they nearly destroyed their resources and those of future generations. 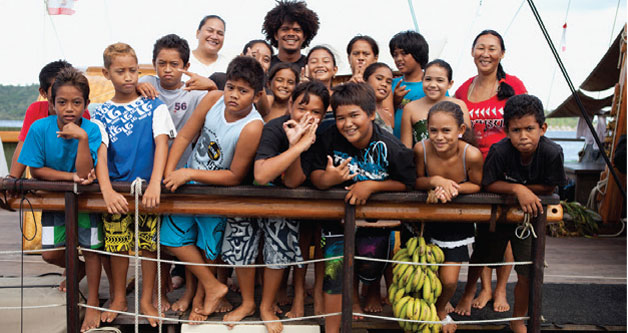 The children gave examples of how their environment was suffering. We shared some of the examples of personal greed and disrespect for nature that we had encountered on our journey. Along the coast of southern California, we saw oil slicks glistening on the water’s surface and smelt the clusters of giant oil rigs long before they came into view. We were unsettled by ominous rumbling 50 miles from land and suspected seismic testing for oil exploration – an act that can deafen whales and dolphins, leading to mass strandings. We saw nuclear power plants looming over golden beaches, and huge underwater toxic-waste dumps on our charts. We breathed in the unavoidable smog that suffocates mega-cities like Los Angeles – created by the millions of car-exhausts and industrial chimneys that billow black smoke night and day. We were overwhelmed by the tonnes of domestic and industrial trash drifting with the currents that becomes deadly food for our ocean whānau. We listened to the First Nation peoples’ tragic, yet all-too-familiar stories of pristine lagoons, waterways, wetlands and sacred sites that have become dredged ports, cesspits and concreted industrial zones. We witnessed longlining and large scale purse seining, fishing practices that are decimating marine populations. We came upon hundreds of shark carcasses, their fins amputated for soup, an industry that is slaughtering the kaitiaki of our ocean – perhaps the most crucial animal in the marine ecosystem.

After months of living on the ocean, we were more sensitive than ever before to the destructive practices we humans have carelessly adopted. Many of us felt a revived connection to the world around us, and how could we not? We had giant blue whales surfacing just metres from our hulls. We sailed alongside hundreds of magnificent gray and humpback whales, calving and mating in the warm and shallow waters of Baja.

We spent hours lying on the taumanu watching curious dolphins play in our bow wave. On the Cocos Islands, we swam with schools of hammerhead sharks moving gracefully through their domain. We passed “burtles”’ – birds hitching rides on the backs of turtles – and were ecstatic at the sight of frigate birds – a sign of land nearby. We truly gave thanks when, weeks from anywhere with fresh food, we received gifts of fish from Tangaroa. We were inspired by people and communities dedicating their lives for the survival of habitats and endangered species.

In Cabo Pulmo, Mexico, we met a community that had put a rāhui on their dying reef 15 years before. Today this reef is world famous for its ecological recovery, and is now a renowned eco-tourist and diving spot. We were touched by the dedication of Galapagos Islands rangers, working tirelessly to save the endangered Giant Land Tortoise from extinction.

The story of Māui and Te Ika tells us that we must return to our traditional values, which are based on a deep connection and understanding of our place in the world. If we live by this ancient edict, we can make wise and sustainable decisions that ensure a future for our tamariki mokopuna. We have much to learn from our tupuna and their stories.

Will we be remembered by our mokopuna as those who overcame great challenges on the voyage to sustainability, or as the greedy brothers who destroyed the natural world? The choice is ours today.