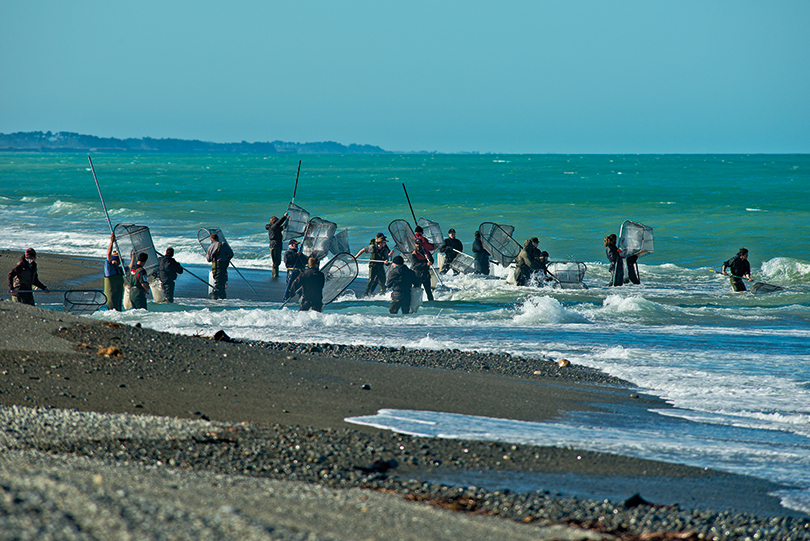 Above: Whitebaiters enmasse trying their luck for the big catch at the Ōpihi River Mouth.

“What I’d like to tell you is my history with whitebaiting. When I first started – which is a long time ago – how we fished then, and how it’s changed over the years to what it is now. Is that what you’d like to hear?”

Thomas Rochford (Ngāi Tahu – Makaawhio) has been whitebaiting on the Jacobs River in South Westland for more than 80 years, learning from a pair of brothers who lived down the road from his family.

“Instead of going to school I’d duck through the paddock and spend the day as their little shadow,” he reminisces. “No nets in them days. The old fella, he just used to dig a hole in the river and lay a towel in it. The bait would come up and as soon as it was full he’d just pull the edges of the towel together. No buckets – he’d put it in a sugar bag and put that over his back, and of course I helped carry my little load up too. So that’s the start of my whitebaiting.”

These days, it’s a tradition within the Rochford whānau. “It’s in the blood,” says Barry Rochford (Brush), Thomas’ son. “I live two and a quarter hours’ from the river. Some days I’ll be at work and I’ll have a feeling – I’ve got to go whitebaiting. I’ll drive down, fish for a couple of hours, then I’ll drive back and carry on working. It’s something in you that you can’t explain, but you’ve just got to go.”

On the other side of the motu in Temuka, whitebaiting has been a family affair for John Henry (Ngāi Tahu – Arowhenua) for as long as he can remember. “Our whānau have a long association with whitebaiting in this area, going back to my great-grandmother,” he says. “She fished every year and sold her whitebait to the rich Europeans in Timaru for clothing for her children.”

She passed the tradition on to John’s mother, who missed only two seasons in her 93 years. “She was known as the whitebait lady,” John says. “She and her brother taught me how to whitebait in the rivers and I’ve been doing it all my life.” 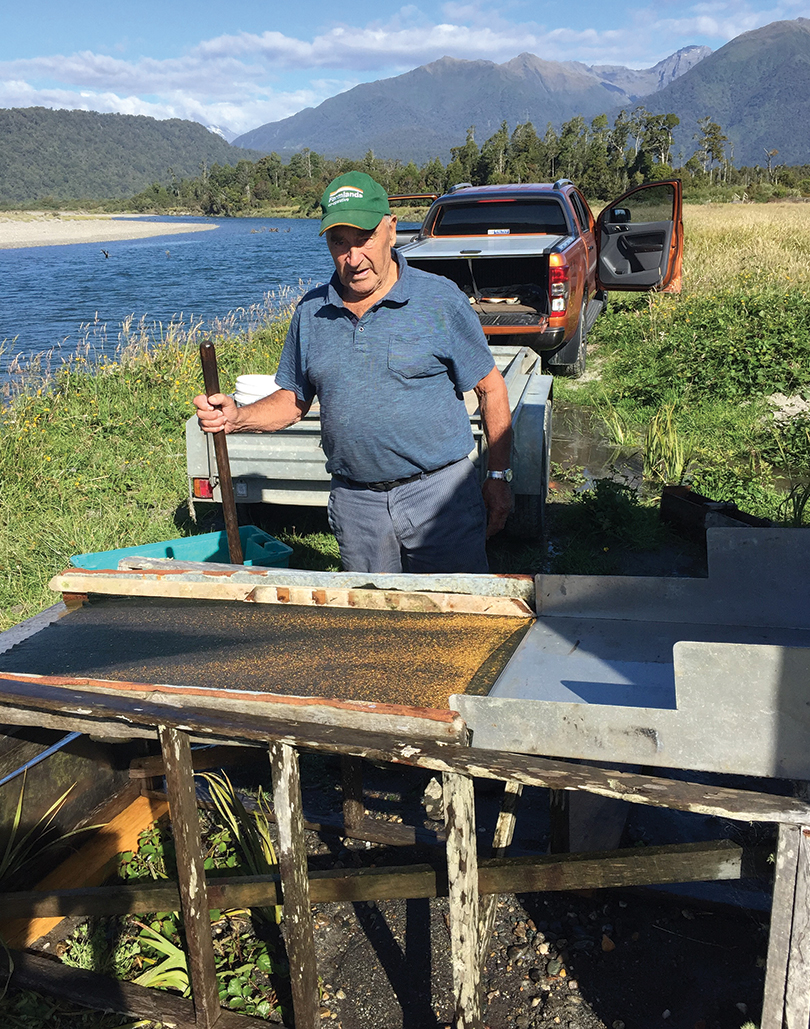 Above: Thomas Rochford at his whānau stand on the Jacobs River, Makaawhio.

Further south, Steph Blair (Ngāi Tahu – Awarua) has whitebaited since childhood at Waikawa in the Catlins, and its surrounding tributaries. “My whānau have always known that the whitebait run earlier than the official dates of the season, and that the moon has a lot to do with when and how they run,” she says. “If there’s a moon just before the season starts, you could just about put money on the fact that the inaka would run on that. Generally, a full moon or a new moon, you’d have a good catch nine times out of ten.”

For these whānau, and many others throughout Te Waipounamu, whitebaiting is just one of the traditional food gathering practices that make up our cultural identity. “Mahika kai is what defines us, it’s who we are as Ngāi Tahu,” says Steph. “It’s up there with the reo for me.
Our tūpuna fought for it – our mahika kai is one of the nine tall trees of the Ngāi Tahu settlement.”

Whitebait are the juveniles of six galaxiid species that lay their eggs in bankside vegetation, with spawning triggered by very high spring tides and autumn floods. The larvae are carried out to sea, and after about six months migrate to freshwater habitats where they mature to adulthood. Whitebait are caught in the lower reaches of the river during this upstream migration or “run”.

For several years, whitebaiting has been subject to limitations, including a legally fixed season which targets the migration period of the most common whitebait species – īnanga – and avoids the migration periods of the four species that have been classified as “at risk” or “threatened” by the Department of Conservation (DOC). In 2018, DOC announced it would be considering further measures to restore the whitebait population and provide for a sustainable fishery.

Generations of passed down knowledge means that Ngāi Tahu whitebaiters are well-placed to comment on the whitebait stock, and most readily acknowledge there has been a noticeable decline in catch. Steph and Thomas remember whitebait once being so plentiful that whatever went uneaten was dug through the garden.

“I can remember seeing the whitebait in river, you could see it coming – the ripples in the water,” says Steph. Thomas has similar recollections of watching the whitebait run at Makaawhio. “Would you believe it, the river was blue with whitebait,” he recalls. “I only wish
I had some photos but in those days there were no cameras. You could almost walk across the river on whitebait.” 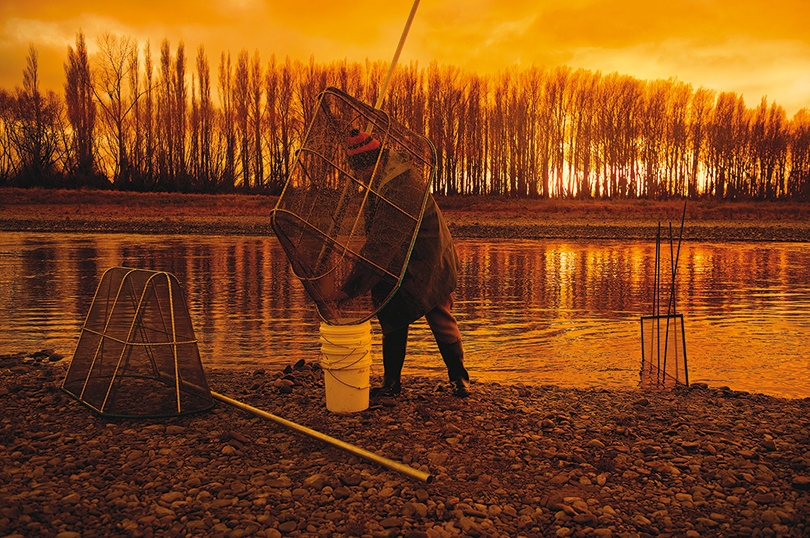 Above: John Henry emptying his sunset catch at the Ōpihi River Mouth.

The decline of our taonga species is of at least as much concern to iwi as it is to DOC, and Ngāi Tahu whitebaiters are not contesting the fact that something needs to be done. However, the announcement of a public consultation on proposed changes to whitebait management has been met with widespread dismay. The changes include introducing licencing, reducing the season, further regulating equipment, and potential closures of some rivers.

Speaking on behalf of Ngāti Waewae, rūnanga chair Francois Tumahai has voiced concerns about the practicality of the proposed changes, explaining that the customary fishing rights of Ngāi Tahu would be unaffected by regulations from the Crown, as stipulated in the Ngāi Tahu Claims Settlement Act 1998. “Mana whenua will do what we’ve always done and will always do,” he says. “However, it is unpalatable for us to be pitted against recreational and non-Ngāi Tahu fishers in this area.

Francois grew up whitebaiting with his pōua, and says that mana whenua have always been more than willing to adapt their whitebaiting practices to ensure the sustainability of the fishery. The problem lies with the lack of consultation with Ngāi Tahu as a Treaty partner.

“Ngāi Tahu is more important than any other stakeholder – we are at the top of the pile,” he said. “If we are going to move forward as partners, let us be part of the decision-making around creating those regulations.”

Ngāi Tahu whitebaiters on Te Tai Poutini are not the only ones to question the apparent lack of iwi consultation.

“I’m a bit livid that it’s reached the stage of public consultation before they’ve engaged with mana whenua,” says Steph. “I know that they made sure to include some of our Ngāi Tahu scientists as part of this process, but they still needed to talk to mana whenua living out in the regions. Mātauranga Māori and science can work together – we’ve done it before and I know plenty of people who would have loved to be included in a conversation about whitebait.”

John agrees, saying: “Down here people are quite adamant that they’ve gone about it the wrong way. As a Treaty partner we should have been consulted in the first place. DOC have said that there was iwi consultation but I wasn’t a party to it, and neither was anyone on the marae – so who did they consult with?”

Whitebaiters throughout the country all agree that the proposed regulations fail to acknowledge the different types of rivers and favoured whitebaiting techniques in each region.

“It needs a localised approach, and they’ve come down with one big hammer,” John says. “What we do here in South Canterbury is different to say Christchurch, which is different again to the West Coast and Southland. We use a scoop net, which is just a hand-held gauze net with a frame around it.” 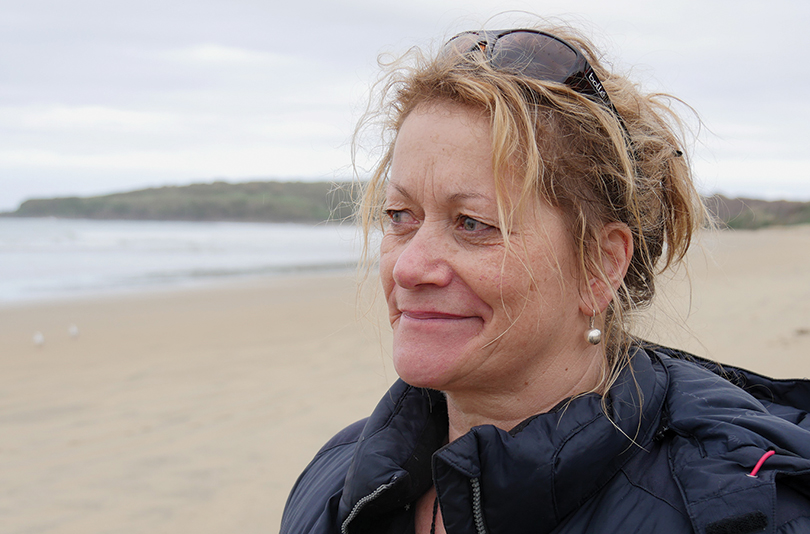 In other areas, whitebaiters use sock nets and set nets, as well as passive equipment like screens to direct the fish, or fish from permanent structures known as stands.

However, many whitebaiters believe that even tailored regulations would be ineffective in restoring the fishery, because the degradation of waterways through forest clearance and agriculture are the main cause of declining catches.

“The regulation issue is a sideshow to the destruction of whitebait habitat and breeding grounds. The fact is, fish need water to live in,” says Dr Te Maire Tau, upoko of Te Ngāi Tūāhuriri and co-chair of Te Kura Taka Pini, the freshwater unit at Te Rūnanga o Ngāi Tahu.

“There isn’t enough water in the rivers in any comparative way to what there used to be, and this is because the Crown has privileged the agricultural sector over our economy – which is mahinga kai, including whitebait.”

According to Te Maire, whitebait is not the only species to suffer from decreasing water quantity and quality. Freshwater kōura, smelt, longfin tuna and kanakana are all in decline – but the mainstream popularity of whitebait means it is the object of this narrow-viewed review.

John agrees, saying that in his lifetime he has seen river flows decrease, coastal wetlands disappear, and the populations of freshwater species diminish. “They’re trying to solve something at one end of the river, but they’re still handing out water upstream. Iwi have pretty staunch views on water, which is why it’s very frustrating to see our rivers over-allocated, some of them by 300 per cent.”

The consultation period for the proposed changes to whitebait management closed on March 16, and DOC received and will now review more than 8000 submissions before making final recommendations to the Minister of Conservation. Ngāi Tahu will be awaiting the outcome and considering its next step. “My hope is that we can stand our ground and shake that cage,” says Steph. “It’s going to take a lot of work to tidy up our waterways, and that’s the only thing that will bring the īnaka back. Ki uta ki tai – from the mountains to the sea.”