The Davis whānau of Murihiku are well-known as a staunch tītī whānau. Over the years they have poured time, energy, and resources into their taonga, determined to “walk the kaitiaki talk” by caring for their islands, and the many species that call (or have called) them home.
The measures they have taken to eradicate pest species are a crucial part of this. Kaituhi Renata Davis revisits the mahi undertaken by his whānau and the wider tītī community, and issues a call for greater predator control throughout Aotearoa. 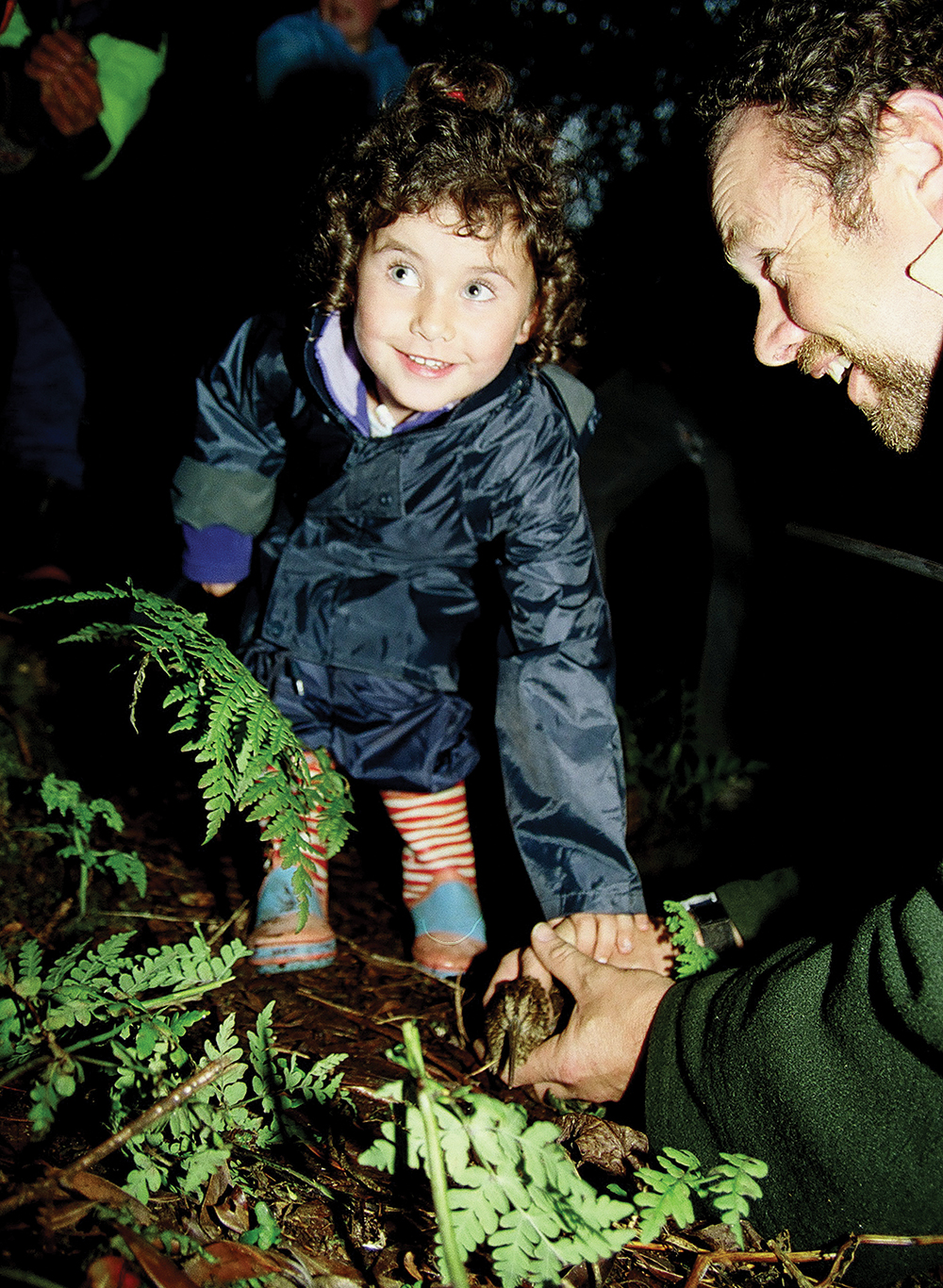 It’s no secret that European contact saw the intro-duction of all manner of invasive predators to the shores of Aotearoa (such as ship rats, Norway rats, mice, etc). It’s also no secret that these visitors had a massive effect on traditional Kāi Tahu food sources (kākāpō, kererū, and many other species that are now critically endangered). Not even the most remote corners of our takiwā were spared. Even at the isolated tītī islands, where muttonbirds (sooty shearwater chicks) are harvested, unwanted visitors made landfall from Rakiura and passing boats.

For years, the tītī community experienced the destructive power of introduced pests on their motu.

Tane Davis, chair of the Rakiura Tītī Islands Administering Body (RTIAB) and more importantly, my dad, recalls the nuisance caused by the kiore (rats) on our motu, Pūtauhinu. “Sometimes if you hadn’t secured your home properly you’d come back, and, hello, they’d been in the house. You had to scrub everything, throw things out. They’d mimi’d all over the place; chewed on stuff.”

Lania Edwards (née Davis, Ngāti Māmoe) recounts the effect of rodents on Rukawahakura (Joss’s Island off the east coast of Rakiura), and their attempts to keep the pests at bay. “As a kid, my job was to walk around the island and put poison into each trap. Dad continued to use traps and poison over the years hoping to eradicate them, but they always came back. We battled with the rats, but we couldn’t break through.”

The effect of the pests’ damage was devastating: “The numbers of tītī slowly declined each season, and eventually there was nothing to harvest. The parent birds had left, as their eggs had been eaten by the rats. I’m not even sure if any had the chance to hatch. There were rat holes beside practically every active burrow.”

Pete McClelland is an ecologist and long-time partner of the tītī community, as well as the former Te Papa Atawhai (Department of Conservation) Manager – Outlying Islands. He notes the negative impact invasive species have on the ecology of the islands, including on birds, invertebrates, and vegetation. “Without invasive species removal, the islands will never heal; and the impact will get greater as vegetation changes,” he says. 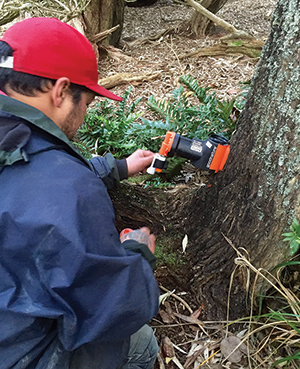 Early approaches to rodent control on the tītī islands were typical of the ingenuity of muttonbirders and their “Number 8 wire” approach. Dad tells me that in the 1960s, our pōua and others mixed up a poison-porridge concoction in a concrete mixer, and spread it throughout various islands on makeshift bait stations. It’s safe to say the methodology has become more sophisticated since then, with the use of helicopters and commercial rat poison.

In the early 1990s, Kia Mau Te Tītī Mō Ake Tonu Atu was launched – a research project conducted by the tītī community in collaboration with the University of Otago. It was hardly surprising when it identified predation by rodents as a key impact on the tītī population.

Armed with a greater understanding of the underlying science, advances in eradication technology, and access to funding, the whānau of Pūtauhinu undertook a coordinated approach to pest control. Added to the mix was newly-obtained compensation from a detrimental oil spill off the coast of California that had affected thousands of tītī. The whānau had the drive, technology, and resources to bring about transformative change.

In 1996, the whānau of Pūtauhinu voted to eradicate the kiore from the motu. The people of the island got together and talked it through. However, not everyone on Pūtauhinu agreed to the proposal. Kaumātua Uncle Rongo Spencer noted that the kiore provided a connection to our ancestors who had brought them to the islands for kai. Dad was tasked with convincing Uncle Rongo to change his mind. “I was trying to find incentives and we were talking about bird life. I said to him, ‘Back in the day there used to be the hakawai on the Cape. There may be opportunity to get that bird back.’”

Uncle Rongo quickly changed his mind. “Oh, the hakawai, I remember hearing them on Taukihepa when I was a child! I suppose it’s not such a bad idea after all – ok then!”

The hakawai has a special place in tītī island storytelling. Generations of muttonbirders recall the terrifying call of a giant bird of the night, going: “hakwai, hakwai, hakwai” followed by a loud, hair-raising noise resembling a jet engine. Ornithologist Dr Colin Miskelly has convincingly argued that the mythical hakawai is in fact the same bird as the tutukiwi or Snares Island snipe (Coenocorypha huegeli). Regardless, the prospect of restoring the species to the motu was enough for Uncle Rongo.

Having witnessed the revitalisation of our motu Pūtauhinu throughout my childhood, it has been especially rewarding to serve on the RTIAB as an adult, and be a part of the transformation of other islands, such as Rukawahakura, off Rakiura’s east coast. Once a heart-breakingly empty motu, this is now a flourishing example of kaitiakitaka, hard work, and determination.
Renata Davis

The successful eradication went ahead in August 1997 via an aerial drop of brodifacoum, and our whānau noticed immediate improvements in the ecology of the motu. The struggling tīeke or saddleback started to thrive; invertebrates and flora began to flourish. Conditions were ripe for the motu to receive other rare species, and in the same year, mātā (Codfish Island fernbirds) were translocated from Whenua Hou (west of Rakiura), and toutouwai (Stewart Island robin) were received from Pohowaitai (south-west of Pūtauhinu). As kids on the island, my siblings and I spent our holidays nanao’ing and building huts in the thriving forest, watched over by some of the country’s rarest birds.

The eradication was so successful that Dad was able to make good on his promise to Uncle Rongo by bringing the hakawai to Pūtauhinu; the jewel in the crown of our motu. On 16 April 2005 the whānau of our island, assisted by DOC representatives, released the tutukiwi into a fern-filled gully. “It was incredibly rewarding to be able to carry this out before Uncle Rongo passed away,” Dad says. The tutukiwi quickly established themselves on the island, and by 2011 the population was estimated to be over 320. Since then, the rare manu has been proudly translocated to islands off the opposite coast of Rakiura: Kani (Kundy Island) in 2015, and Mokinui (Big Moggy Island) in 2017.

Having witnessed the revitalisation of our motu Pūtauhinu throughout my childhood, it has been especially rewarding to serve on the RTIAB as an adult, and be a part of the transformation of other islands, such as Rukawahakura, off the east coast of Rakiura. Once a heart-breakingly empty motu, this is now a flourishing example of kaitiakitaka, hard work, and determination. 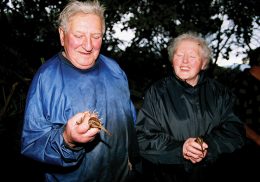 Uncle Rongo Spencer and Aunty Jane Davis examine their new taonga before they are released on Putauhinu in April 2005.

The whānau of Rukawahakura met with the RTIAB and agreed to a coordinated eradication by spreading brodifacoum rat bait. Lania was reluctant to go down this path at first.

“I gritted my teeth – I didn’t want to keep throwing poison at our already toxic land,” she said. Previous attempts to rid the rats with poison had affected the ruru (morepork) and hawk populations, so it was agreed that a “control” operation would be undertaken; spreading just enough poison to lower the rodent levels, without affecting other species.

On 14 September 2014, the brodifacoum operation was carried out by a team of 12 volunteers, including the whānau, members of the RTIAB, wider tītī whānau, and DOC representatives. Amazingly, the control operation turned out to be fully successful, confirmed by Sandy King and her trained rodent-detecting dog, Gadget.

Meanwhile, Lania researched more environmentally-friendly ways to ensure the motu remained rat-free. She came across the Goodnature A24, a CO2-powered self-resetting trap. The RTIAB agreed to fund 30 traps for the whānau of Rukawahakura, and Lania’s husband Laurence Edwards ensured they were duly installed. The whānau have vigilantly monitored the traps quarterly for signs of rodents. 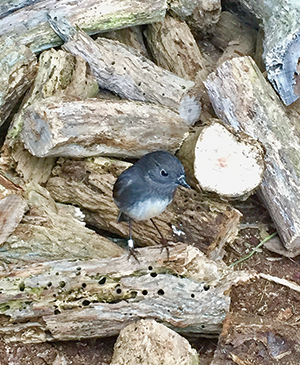 To date, signs have been incredibly positive. “Three years later, we still have a rat-free island,” Lania says. “The tītī are breeding and doing well. The pūnui (an endemic plant) is flourishing and taking over the island, as we heard it did in earlier years. The pīwakawaka (fantail) and bellbird have dramatically increased. More tūī have made our motu home, and even some yellow-crowned parakeet. Tree growth has been very noticeable.”

“It was a beautiful sunny day when our new additions arrived,” Lania says. “Everyone there was excited and emotional. It was so exciting this tītī season to watch the saddleback digging fat bugs out of the rotten trees, and all gather together to sing in the rising sun. Cheeky Stewart Island robin follow you as you cut tracks, eating all the bugs you’ve stirred up.”

Most of us would like to see the tītī islands rid of all pests, with comprehensive biosecurity measures in place to prevent reinvasions. These are goals we are approaching steadily, enabling us to create safe havens for more rare species.

One of the biggest aspirations is a fully predator-free Rakiura, which would solve a lot of reinvasion problems for the tītī islands. Hopefully, the Crown’s Predator Free 2050 initiative will provide us with an avenue for achieving this goal; perhaps even creating employment opportunities for our community in the process.

Our connection to the islands is fundamental. Our mahi is about upholding the mana of the islands and tītī culture. It’s about retaining things that are uniquely “us”, such as the hakawai tradition. It’s about walking the kaitiaki talk, and disproving those who doubted our ability to take responsibility for the motu. As Pete McClelland says, “I admit to being apprehensive when the former Crown islands were given back to the birders, but now I believe there is no doubt it was the best thing that could have happened.”

It’s about whanaungatanga, building relationships, bringing the tītī community together to work towards common goals, capacity building, and education, all woven together. Above all, it’s about the island. Ko mātou kā motu, ko kā motu ko mātou. We are the islands, and the islands are us.