In 2018 the government launched the Provincial Growth Fund, with $3 billion over a three-year term to invest in regional economic development. The fund aims to contribute to community well-being by creating sustainable employment opportunities, and lifting the productivity potential of the regions. Early this year, the fund earmarked $3.7 million for the Gore District, to support economic growth and tackle youth unemployment. Kaituhi Rob Tipa outlines the exciting progress as long-cherished plans begin to come to fruition.

Above: An artist’s impression of the new Maruawai Centre, which will house displays featuring 1000 years of occupation of the Mataura River valley by southern Māori, the region’s national significance for agricultural production, and its reputation as the brown trout capital of New Zealand.

Stories, myths, and legends of southern Māori occupation of the Mataura River valley will be brought to life in a multi-million dollar redevelopment of the Gore Arts and Heritage Precinct.

The Maruawai Project is the culmination of many years’ work developing and refining an ambitious arts, heritage, and cultural hub in the heart of Gore’s central business district.

Plans for the Maruawai Cultural Precinct include a new Maruawai Centre, which will celebrate close to a thousand years of human occupation of the Mataura valley.

The precinct already has community services such as the Gore Visitor Centre, Gore Historical Museum, and Gore Library; and popular tourist attractions including the Hokonui Moonshine Museum and the award-winning Eastern Southland Art Gallery, home of nationally and internationally significant art collections.

The Maruawai project received a $1.6 million cash injection from the Provincial Growth Fund in April, allowing work to start on the first stage of a major upgrade of the heritage precinct and the Hokonui Moonshine Museum.

The Minister for Regional Development, Shane Jones, says the project is an exciting development that will bring more tourist traffic to Gore, and encourage visitors to spend more time and money in the region.

The new Maruawai Centre will occupy a large, open-span former retail building. There’ll be displays explaining the district’s importance to southern Māori for food gathering, its national significance for agriculture, and its reputation as the brown trout fishing capital of New Zealand.

Terry Nicholas, the Hokonui representative for Te Rūnanga o Ngāi Tahu, sees the project as the first public opportunity for the rūnanga to share its cultural identity, myths, and legends with visitors to Gore. “It’s the opportune chance to profile and correct our culture and identity through the increased pedestrian traffic visiting the Maruawai Centre,” he says.

“It has been a long-term project to date, and aspirations have been high.”

For Waitaha, Kāti Māmoe, and Ngāi Tahu people, Maruawai (the valley of water) was a massive food basket, with a complex matrix of mahinga kai (food gathering) sites. Tuna, kanakana, kākahi, native trout, ducks, weka, taramea, and tūtū were some of the valued traditional resources of this region. A network of walking trails through the valley allowed tangata whenua to move easily from the southern coast of Te Waipounamu to the southern lakes, Central Otago, Martins Bay, Milford Sound, and the West Coast.

The design of the Maruawai Centre includes an opportunity for Ngāi Tahu artists to recapture the essence of a journey through the Mataura valley, with art works representing six themes focused on the flora and fauna of the region.

Hokonui Rūnanga was a major partner in the application for funding from the Provincial Growth Fund. 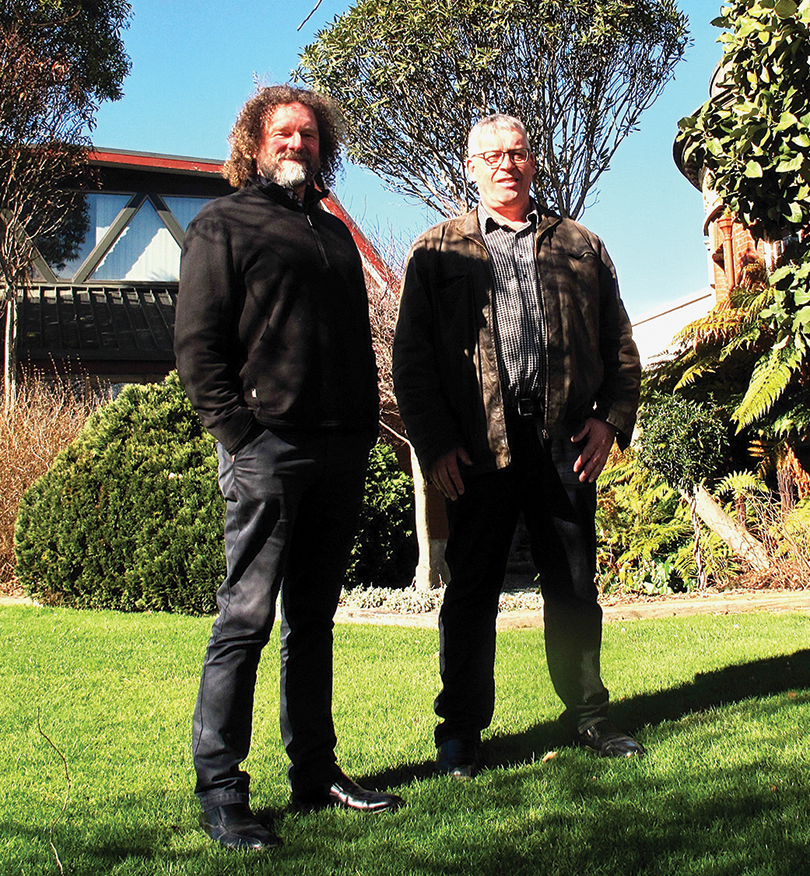 Above: Jim Geddes and Terry Nicholas stroll through the garden between the Eastern Southland Gallery and the Gore Library, part of the cultural hub of the Gore central business district.

As well as the $1.6 million tagged for the Maruawai project, $2.1 million was granted to the Hokonui Huanui project, which addresses youth unemployment and helps young people take up job opportunities in Southland’s growing economy.

The rūnanga is one of several health and social service partners in the district that will administer Hokonui Huanui.

Terry Nicholas says that all good employers retain their staff. Most jobs in Gore offer long-term employment, and many existing jobs have been held for as long as three generations by members of the same family.

He says the Huanui initiative is an opportunity to prepare young people for a sustainable future with new roles in hospitality, apparel, arts, and crafts.

Terry believes that the Maruawai and Huanui projects may lead to opportunities for the rūnanga to host larger groups of visitors for a cultural experience at Hokonui Marae. This in itself would create extra employment options for young people.

The Eastern Southland Gallery, which opened in Gore’s former public library in 1984, was “the first cab off the rank, and the project that started all the others,” Geddes says.

“Our collection at the gallery has always had an elemental focus to it, and the Ralph Hotere Gallery is a good example of that.

“When we opened, we had two people who supported us right at the beginning. One was Ngāpuhi artist and print-maker Marilyn Webb, a huge supporter of ours; and Ralph came on board very soon after that.

“Marilyn and Ralph were the first two solo exhibitions we had when we opened, and they always maintained an interest in what we did.”

When the gallery was gifted an important international collection of works by ex-patriot New Zealander John Money, Hotere also gifted a significant number of works from his own collection. Other donors came on board to support the gallery, which now has 80 of Hotere’s works, regularly rotated in a permanent exhibition.

The gallery also has a large collection of works by Marilyn Webb, who is now a patron of the gallery and is actively involved as a distinguished artist, mentor, and educator at the Ōnuku Art Centre across the Mataura River in East Gore.

Both Hotere and Webb were mutual friends of poet Hone Tuwhare. All three were former Burns or Frances Hodgkins Fellows at the University of Otago, and all remained in Otago.

“Hone Tuwhare became a really important figure in the gallery, mainly as a poet, but he had a very strong connection with artists as well, and he was a great champion of ours,” Geddes says.

The first stage of the Maruawai project involves the redevelopment of the Hokonui Moonshine Museum, a unique attraction that celebrates an illicit trade in alcohol after the Mataura district, by majority vote, declared the sale of alcohol illegal in 1902.

Highland Scottish settlers brought with them the skills and the stills to manufacture illicit whiskey known as “Old Hokonui” or “Hokonui Moonshine”, and they did a roaring trade, flaunting prohibition laws for the next 51 years.

Geddes says a brand new boutique distillery will be a fully commercial operation, with an off-license and manufacturing license to legally sell Old Hokonui to the public. All profits will be ploughed back into the coffers of the trust that runs the museum.

The new distillery will be an extension of the existing museum building, and will look like “a rusty old corrugated iron shed”, complete with tasting and flavour chambers.

The Maruawai project as a whole will be undertaken in three stages. The refit of the Hokonui Moonshine Museum is scheduled for completion next year. Work on the Maruawai Centre is likely to be completed by late 2021, and public art works and landscaping of the whole cultural precinct is expected to be complete by early 2023.

“Collectively, it’s a history lesson, it’s an arts lesson, it’s a geography lesson, and it’s a social science lesson; all rolled into one,” Geddes says. 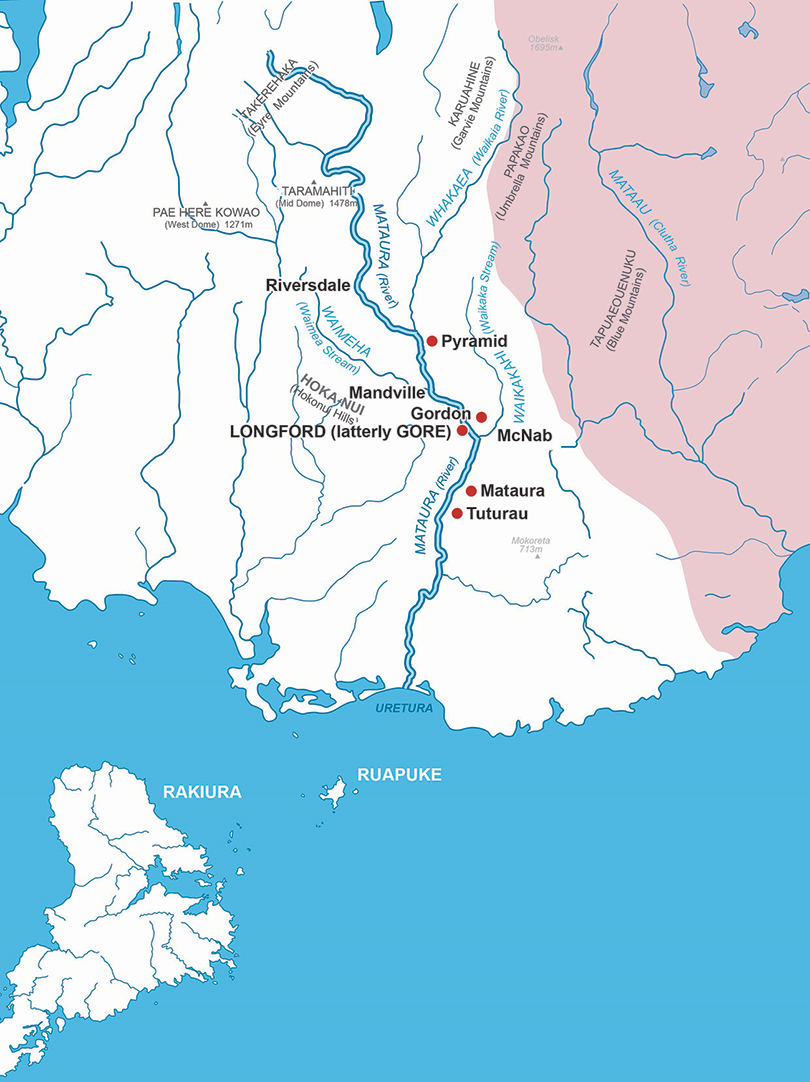 Above: A map of the Mataura River valley showing early Māori place names for some of their main food gathering sites.

The land that today encompasses much of the Gore central business district, North Gore, and West Gore was known as Taumatatanga hei Kaungaroa, and was largely swamp, tussock, and small streams.

The terrace above the Mataura River at East Gore was known as Ōnuku, the place where a lament was composed by a hunter mourning the death of his wife and family in a heavy snowstorm. Historically, this area was a popular camp and processing site for taramea (speargrass), an ingredient used in many perfume recipes.

A historic Presbyterian church at Ōnuku is currently being restored for use as an art education centre. A creative workspace for visiting artists is already up and running, providing an important engine room for the wider Maruawai Cultural Precinct.

Upstream on the Mataura River is Kahuika, also known as Waikākahi, at the mouth of the Waikaka Stream, where kākahi (freshwater mussels) were gathered.

Wharekorokio is another seasonal food gathering camp further upstream, at a place known to European settlers as Pyramid.

One of the best known mahinga kai sites in the valley is Te Au Nui, the waterfall at Mataura, where kanakana (lamprey) were collected seasonally as they migrated upstream to spawn.

South of Mataura is Tūtūrau, a small permanent Ngāi Tahu settlement where tūtū berries were once plentiful. It is also the site of a famous battle in 1836 where Ngāi Tahu warriors defeated an incursion by a Ngāti Tama war party led by Te Puoho. This battle was the last instance of inter-tribal warfare in southern New Zealand.