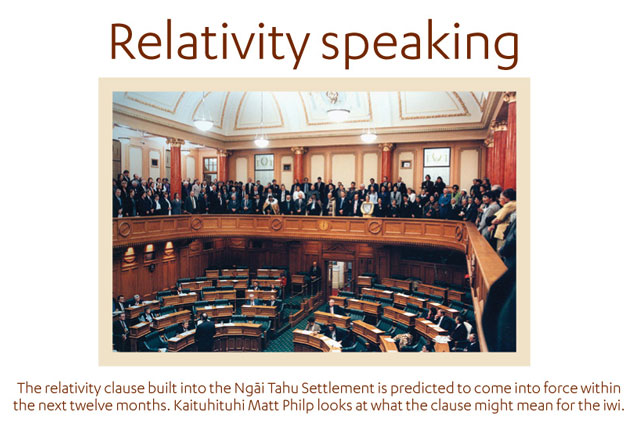 It may have gone almost unnoticed by the media, but the passing into law of five Treaty of Waitangi settlement bills on a single day in March was of keen interest to Māori and not only to the five iwi directly involved.

For Ngāi Tahu and Waikato-Tainui, the accelerating pace of settlements will trigger what is known as the relativity clause, a formula provided for in those first two settlements that will be triggered at the moment Treaty settlements pass (in 1994 dollars) $1 billion.

But this isn’t just about money. As Ngāi Tahu kaiwhakahaere Mark Solomon points out, the relativity clause recognises the iwi’s bravery in being willing to enter settlement negotiations at that early moment when there was still much uncertainty and suspicion. He characterises it as another element of redress. “It’s important to Ngāi Tahu in the same way that every element of our redress is important to Ngāi Tahu.”

Te Rūnanga o Ngāi Tahu CEO Mike Sang predicts the $1 billion mark could be hit later this year. And while any decisions about how or, indeed, when the clause might be invoked lie in the future, Sang says the relativity payment “will enable us to look at other investment opportunities and to increase the distribution to Ngāi Tahu whānui”.

How much is the relativity clause likely to deliver? The clause negotiated by Ngāi Tahu provides for 16.1 per cent of all future Treaty settlements (17 per cent for Waikato-Tainui), adjusted for interest and inflation. 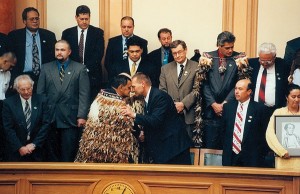 In Parliament as the Ngāi Tahu Claim Settlement Act passes

Already you can hear complaints. But what does relativity mean for Ngāi Tahu?

It is a deferred payment, says Solomon. In 1997 when Ngāi Tahu was working towards a settlement with the Crown, there were plenty of uncertainties to be worked through. Because Ngāi Tahu’s settlement was one of the first cabs off the rank, it was important not to make a mistake. “This clause allowed both the Crown and Ngāi Tahu to agree on process and ultimately it led to the settlement.”

Tā Tipene O’Regan, who chaired the principal team that negotiated the 1997 settlement with the Crown, says that without the clause Ngāi Tahu would never have signed.

Remember the context. Waikato-Tainui had secured a settlement by direct negotiation with the Crown for $170 million. After going the tribunal route, Ngāi Tahu was the next cab off the rank. But hanging over proceedings was the then National Government’s so-called “Fiscal Envelope”.

Tā Tipene recalls the “enormous howl of indignation” that rose among Māori after the announcement that, whatever the merits of a particular grievance, the total sum of settlements would not be allowed to exceed $1 billion. 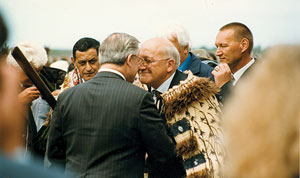 At Ōnuku Marae for the Crown Apology

In Ngāi Tahu’s case, the Crown’s own estimate of the contemporary value of the claim came to $16 billion. “We knew those numbers were unsustainable,” says Tā Tipene, who adds that Ngāi Tahu’s valuation was closer to $18 billion. Yet the government’s negotiators were adamant the iwi shouldn’t expect anything more than Waikato-Tainui’s $170 million package. When you factor in various other “bolt-ons”, the actual benefits exceeded that sum, but even then it was still a “huge diminution” of the actual value of the claim, he says.

Protection is the key word here. Ngāi Tahu pursued a settlement in order to move on to a new phase, says Tā Tipene, but like Waikato-Tainui it had to be sure that should total settlements blow the cap, then its compensation would be adjusted proportionately.

“And to be fair, that was agreed to quite promptly. Jim Bolger [the then Prime Minister who took over negotiations with Ngāi Tahu] saw the justice of our position and he was an eminently fair man to deal with.”

In Mike Sang’s eyes, the relativity clause is nothing more controversial than a contractual clause, agreed to by both parties in an open and transparent process. He thinks of it in terms of a deferred payment. “If anything Ngāi Tahu would have been better off if it had got all its claims settled up front. We’ve made good investment returns over the past 15 years.” 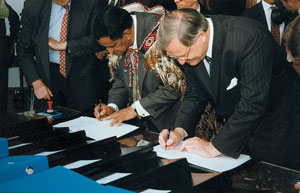 At Ōnuku Marae for the Crown Apology

In any case, he says, “it’s not going to be big bucks in the wider scheme of things … The government will be a bit concerned about how New Zealanders will react, but that will be about communication and transparency.”

So, what happens when that $1 billion line is crossed? Sang says there are various options and no necessary rush for Ngāi Tahu to play its cards. It might make sense to wait until 2014, when there is likely to be a small wave of claims being settled. “But you’ll obviously see increased commercial activity once we work out how best to invest the money.”

Ngāi Tahu uses an inter-generational investment policy framework that echoes other intergenerational investors like the Yale Endowment Fund, says Solomon. It ensures Ngāi Tahu can distribute funding each year to whānau while reinvesting for future generations.

“We believe this deferred payment will ultimately be of benefit to all of the South Island economy because our investments and distributions are largely focused in the South Island.

“Our people are in every part of Te Waipounamu and where you find our people, you will find new initiatives and opportunities and ultimately local economies benefitting.”