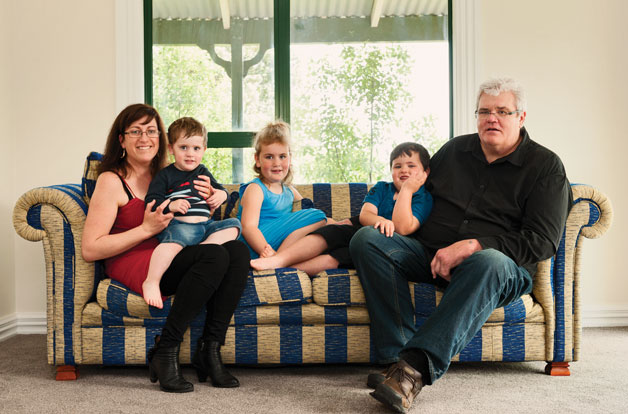 Take a Māori boy from the south, the arrival of Te Māori exhibition and you have the makings of a life-long love of te reo Māori. Kaituhituhi Mark Revington walks alongside Tahu Pōtiki on his reo journey.

Tahu Pōtiki didn’t always love te reo Māori. “I started to learn when I was a teenager and didn’t really take to it. It was thrust on us when I was a Māori hostel boy here in Christchurch. We weren’t very good as teenage boys.”

Pōtiki (Kāi Tahu, Kāti Māmoe, Kāi Te Pahi) says the arrival of the exhibition Te Māori, and the overwhelming presence of North Islanders, seriously exposed the local shortcomings when it came to te reo Māori. Until its arrival in Dunedin in the mid 80s, Ōtākou and Puketeraki people tended to keep their rituals to the marae, he says. The arrival of the exhibition changed all that.

“All of sudden they had to be on display every day for six weeks at the museum and the generation before me were flying by the seat of their pants.

“There were a number of North Island Māori living in Dunedin who were fluent speakers of te reo and were scathing of Ngāi Tahu. I noticed that these influences were changing the expectations and some of the things we did at the marae were changing and it was because we were being told by other people what to do and our elders were left questioning themselves. The generation up from me got angry about it but didn’t fight back. There was a lot of passive aggression.

“We had gone from a generation of people who knew tikanga Māori and had the knowledge to apply it at any given time, to a generation who only knew to follow what their parents had done..”

It is often said that language is at the heart of any culture and it was those early experiences that Pōtiki says made him determined to become a fluent speaker of te reo. But there are other ways for people to be confident in their identity without having the language, he says.

He grew up at Karitāne, “a beautiful place to grow up”, where his dad, Les Pōtiki, had lived a very Māori life without speaking any te reo. “No one spoke any Maori but I recall going to tangihanga and listening to our kaumatua make speeches at night time with all the metaphors in them, but they were in English.

“I was the eldest and dad would take me places to meet our relations, go eeling and catching flounder. Before the challenges came, people like Dad didn’t have any doubts. He passed away before the bulk of those politics came crashing on to our community so I don’t know how he would have responded.” In the late 80s, Potiki sought out a te reo Māori course at Otago Polytechnic that began a language journey that has seen the former chief executive of Te Rūnanga o Ngāi Tahu spend many years researching Kāi Tahu dialect and early writing and become one of the tribe’s knowledgeable Kāi Tahu reo experts.

Potiki had earlier worked as a a fitter at the local freezing works. In his spare time he began to read South Island history. His curiosity sparked, he went in search of the primary sources for some of more complex anthologies he was reading, and found them in the Hocken Library in Dunedin.

“I found myself down in the Hocken Library regularly going through that primary material, the original manuscripts from interviews, or original letters. Lots of them were in Māori and lots of them were in Māori that wasn’t the normal, basic Māori. It was different and some of the language didn’t follow the rules. I started reading in bed at night. I would read page after page of the Williams Dictionary and find new words and look at the difference in meanings. Generally the primary material was couched in an archaic style of Māori which was different to what I was used to hearing. This led me to actually start to understand the manuscript material I was observing.”

He discovered the power of metaphor and patterns in what was an oral language being captured on the page for the first time. “They were full of metaphor and patterns in the way the stories were constructed and the patterns kept repeating across stories. I understand now that they were myth templates and the character of those manuscripts was to aid the orator to relay the story.”

His research would eventually take him to university to study Māori language and literature and to write his assignments in the old style.

Early on in the piece, a bit of research persuaded him that the best way to become proficient in te Reo Māori was to become immersed in it. There was nothing available in the South Island but he had heard about Te Wānanga ō Raukawa in Otaki, wrote to the school and was welcomed in.

“It was the first time I had been on a marae in the North Island and it was in the heart of Ngāti Toa country and boy, did they let me know it. But they were very welcoming. I ended up going there for about three or four years, doing three to four wānanga a year and made some very good relationships.”

From there he found the confidence to return south to run language wānanga, initially in partnership with the University of Canterbury, which had been sending its own students north.

“We hooked up with the team of tutors they were using and went out to Taumutu for a week. It was a great experience for me because I got thrust out front straight away.” The wānanga continued over the next five years as Ngāi Tahu began the long process of language revitalisation, with Pōtiki and te reo Māori specialist Hana O’ Regan helping lead the way.

“The Ngāi Tahu Trust Board sponsored the wānanga but people were used to using their own resources. There wasn’t a lot of money around then, koha was often food and people stayed on the marae.”

At the same time he was busy running youth hui, getting them to think about their Ngāi Tahu identity, and what the future may hold. Pōtiki, who, despite the example of his Dad, had come to realise the importance of fluency in te reo in understanding te ao Māori, was the convenor of the original Kotahi Mano Kāika language planning committee.

Keeping the language alive requires planning. “It was necessary for us to have a concept about what we were going to do. It was all about language planning rather than let it happen to us or let it evolve organically.”

And the challenge in Aotearoa is that the notion of a bilingual country comes with political baggage, he says. Pōtiki would like to see all New Zealand primary school children exposed to at least two languages. “I think personally the curriculum should have a Polynesian language, an Asian language, and English. It would make good sense and it would be great for the kids. In Europe, for example, it’s not an issue but we’re like Canada, one of the difficulties with us is that language is highly politicised. It’s not just about acquiring another medium of speech. It’s heavily laden with historical baggage.”