There are few upsides to a global pandemic, but one positive has been a surge in interest around taha Māori and reo Māori. As a measure of that interest, Reo Māori Mai founder Ariana Stevens has created an online whānau committed to learning and living te reo Māori. Kaituhi Ila Couch talks to Ariana about her passion for language revitalisation, creating tangible tools for learning, and why we need to tautoko each other at every stage of our haerenga reo. 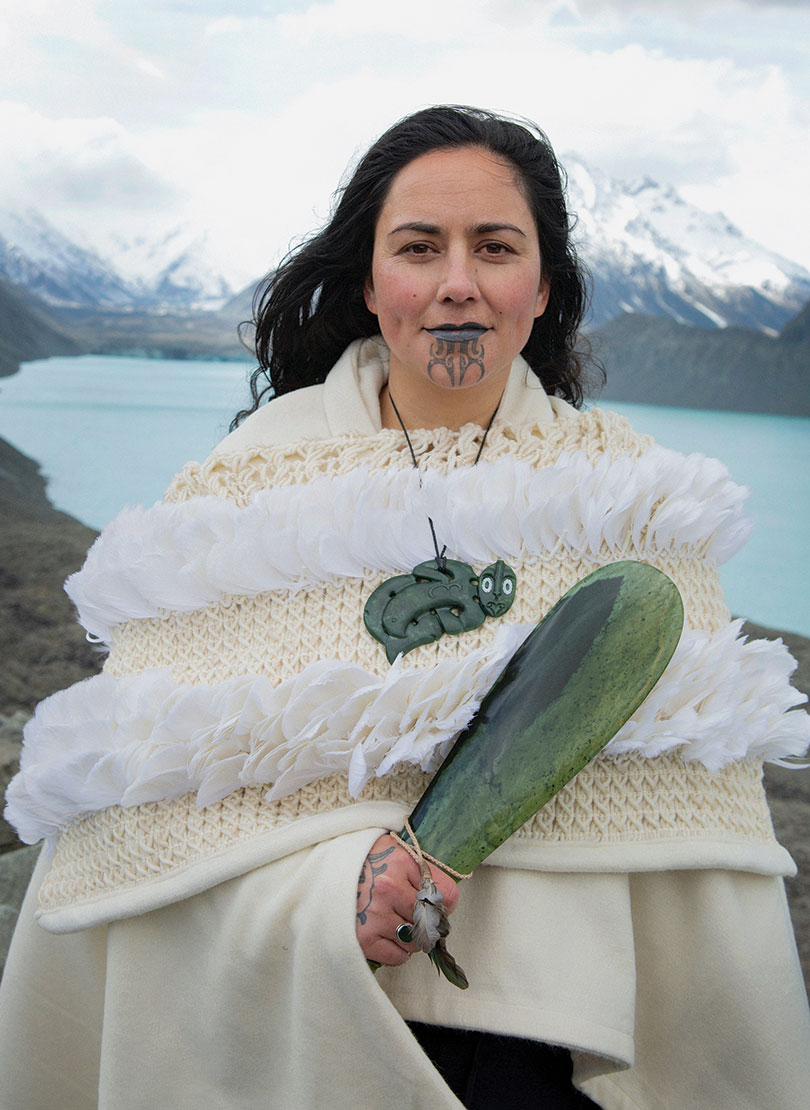 Social media is no substitute for kanohi ki te kanohi, but when the pandemic first started many people discovered ways of connecting to and celebrating their taha Māori online. In the past year the need for virtual connection has only intensified. Now, if you want to find a fitness class in te reo Māori, join a discussion about moko kauae, or share mātauranga around making pigments from the whenua, you can do it all online.

Reo Māori resources are also abundant and more kaiako reo Māori have emerged to support those filling their kete kōrero online. What makes Reo Māori Mai stand out is the way founder Ariana Stevens (Ngāti Waewae, Poutini Ngāi Tahu) maintains the goal of making language learning fun and accessible, while addressing the challenges some Māori face on their haerenga reo.

“An important part of how I like to engage is to voice the unspoken things I have observed over the years as well as things that have been shared with me, because to sit in wānanga with people, to hear about their intergenerational hurt, then turn around and pretend I didn’t know, would be disingenuous of me.”

Reo Māori Mai came from a passion to revitalise te reo Māori and under the umbrella of her company Ariana offers pathways into language and culture that builds community. She provides workplace workshops for businesses and local organisations wanting to bolster their understanding of te ao Māori, te reo Māori and Te Tiriti o Waitangi. For individuals and whānau on their journey, there is a wealth of learning tools that can be accessed free, by koha and for purchase via her website.

In collaboration with local artists and Māori-run businesses, Ariana has created beautifully illustrated wātaka/calendars, mini mihi cards with affirmations in te reo Māori on one side and English on the other, as well as prints to frame and hang in your home or office. She is especially proud of the tactile tools to promote the use of language in the home.

“We have created these things called Kāri Kai and they sit in the middle of the table during kai time with reo prompts to use during a meal. If I can see the question, then you can see the answer.”

After months spent in development with local sustainable design company Frontal Lobe, Ariana recently launched a panga/puzzle around the question “Kei te pēhea koe?” with interchangeable pieces that can be popped in and out to provide different answers to the question.

Rather than back off from some of the difficult topics associated with language, learning and reclamation, Ariana uses social media to further these conversations. She urges proficient speakers, Māori and tauiwi, not to weaponise their reo. Others share their real-life experiences like being made fun of for poor pronunciation or being talked about in te reo Māori, as teachable moments. She addresses sticky subjects like non-Māori learning te reo, what it means to be a good haumi/ally, and how as Māori it is OK to have conflicting views about issues we are often expected to be united around.

Recently Ariana created Live with Reo Māori Mai to give subscribers a private group page to discuss some of these kaupapa as well as creating an intimate space for learning and sharing.

While there are conversations to be had around tauiwi being good allies, Ariana says Māori also need a reminder to support each other. “Mental Health Awareness Week is one that catches me. The message seems to be to speak up about your struggles, but not if you are talking about the ones from intergenerational trauma. Some of the responses to people sharing their ongoing challenges seem to communicate it’s a bit hard, a bit messy, or some of us have worked through it for everybody, so we can all just move on. I see it across many different kaupapa.” 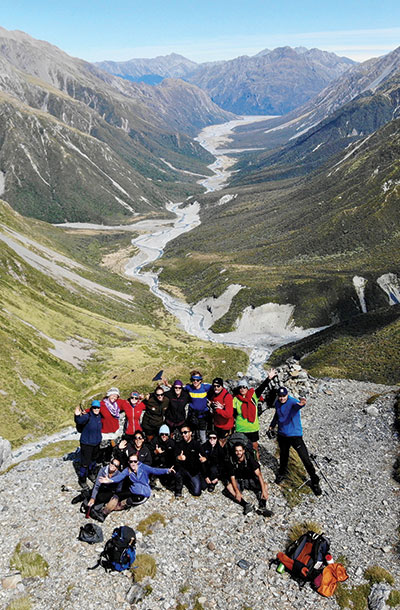 Far left: After tramping from sunrise to sunset over multiple days, Aoraki Bound participants pose for a photo on top of Nōti Raureka.

During this year’s Te Wiki o te Reo Māori, a time when the nation is encouraged to come together to support and celebrate Māori language, Ariana composed an affirmation acknowledging those Māori with mixed feelings about their own connection to te reo. The affirmation was published on Renews with an accompanying video.

Ariana is a mother of two, wears moko kauae, holds a law degree, and is in the first year of Te Tohu Paerua O Te Reo Kairangi, a Masters of Māori Language Excellence. She also remembers what it felt like as a young girl to be ashamed of her taha Māori. “I had in my brain that being Māori meant you were dumb, violent and all of those internalised negative stereotypes,” she says. “Twenty years later, my life is built around te reo Māori and te ao Māori, but I still think about fifteen-year-old Ariana, going to school and thinking ‘I don’t want to be Māori’. I wonder what she would think if she saw me now,” she laughs. “I think she would be pretty surprised.”

Ariana lived in Hokitika until she was four and spent her primary and secondary school years in Te Tau Ihu (Motueka and Nelson). “I didn’t have what I consider a particularly Māori upbringing,” she says. “I didn’t learn te reo growing up and I didn’t feel particularly connected to the Māori communities of Te Tauihu.”

“Aoraki Bound is often the first point of engagement in terms of people connecting to their Ngāi Tahutanga. It informs a lot of my protective instincts around those who are not proficient speakers of te reo and not connected to te ao Māori. Seeing their courage, hunger, drive and curiosity has been humbling and incredibly motivating.”
Ariana Stevens Ngāti Waewae, Poutini Ngāi Tahu

At the age of 17 she spent a year learning te reo Māori through Nelson Marlborough Institute of Technology, but says it was just a way to pass the time until she was ready to study law at Victoria University.

The turning point, as she recalls, happened during a wānanga she was invited to called Te Rā Rangatira. “Kiritapu Allan and a few others had been around international indigenous workshops and involved in transformational conversations around identity. They wanted to bring that knowledge and those skills to a group of young Māori.”

During a group waiata, Ariana found herself flooded with emotion. “I didn’t know the words,” she says. “I felt so embarrassed and ashamed that I cried for hours and hours.” With the support of the group who surrounded her during that time, conversation surfaced about being “Māori enough” and that there is no such thing. “You are just Māori,” says Ariana. 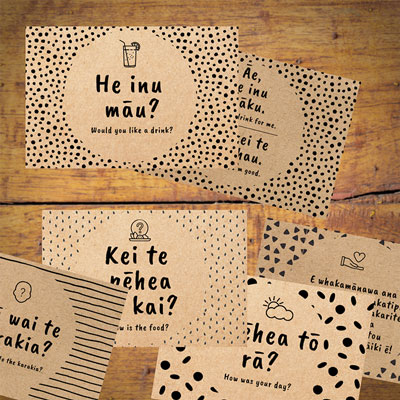 Above and below: Reo Māori Mai resources.

The other piece of the puzzle, the realisation she could put te reo Māori to use in her daily life, came during a waiata workshop in Ōtautahi.

“Karuna Thurlow was running that workshop and she had two preschoolers who had blonde hair and blue eyes like my youngest child, Kōmai. She was talking to her girls in te reo Māori and I was like … ‘oh, I could do that,’ ” she laughs. That workshop also led to a connection with Kotahi Mano Kāika, which is how she says she first felt connected to Ngāi Tahu. “I have spent 12 years in wānanga, attending classes, kura reo, learning pūrākau and in more recent years, giving back by running things. My kids are at kura kaupapa and I have some solid connections into the Māori communities here. It is really interesting to see how much has changed for us.” 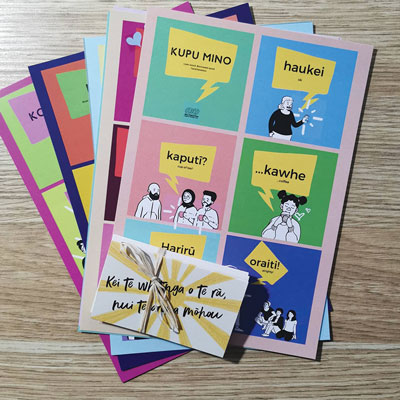 Ariana also credits the many hours she has spent over the years with rōpū on Aoraki Bound for building compassion and facilitation skills. “Aoraki Bound is often the first point of engagement in terms of people connecting to their Ngāi Tahutanga,” she says. “It informs a lot of my protective instincts around those who are not proficient speakers of te reo and not connected to te ao Māori. Seeing their courage, hunger, drive and curiosity has been humbling and incredibly motivating.”

Just a few months into her Masters, Ariana says she is most excited to gain knowledge around language revitalisation and believes having experiences in te ao Māori is a key part of the process.

“There is incredible value in all aspects of te ao Māori, in mahinga kai, mahi toi, raranga, carving, games and the taiao. Any interaction you have in those spaces is part of your journey. I think that is something that can be lost in the push for te reo, sometimes doing some of that groundwork and building your vocab, your confidence and getting a bit of a crew around you can be incredibly valuable for some people.” 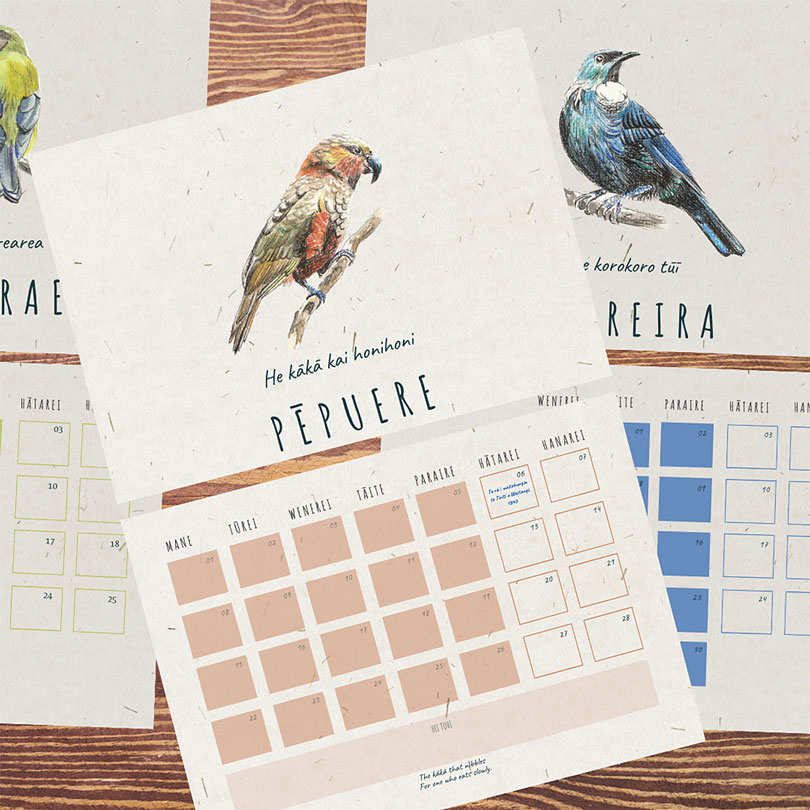 Ariana has many hopes for the future of te reo Māori. “I hope we can have some critical conversations without resorting to personal attacks, that non-Māori people learn how to be good allies, and that te reo is a safe expression of Māoritanga for Māori people.”

She is aware through her own experiences that people still face barriers to learning whether it’s finding the time, childcare, or having the financial and/or emotional resources and support for what can be a challenging undertaking, especially if you are the first in your whānau to speak te reo in generations.

This raises the question around what goals we should be setting and whether we should all aim for fluency.

“There are a few whakaaro where it’s presented as a binary – I’m either fluent or I’m not, but I don’t think our tūpuna had a binary view of the world,” says Ariana. “If I had to visualise what I think learning te reo looks like, to me it’s a relay. It’s not that there is some finish line that I am striving for. It is actually just taking as many steps as I can so that my kids and those after us don’t have to take those steps. You pass the baton on; they take the next steps. There is no one way to do this learning te reo thing and I find freedom in knowing that.”