In 1948, the New Zealand government purchased a large collection of Polynesian and Māori artefacts from William Oldman, an English ethnographical art collector and dealer. The sum of £44,000 was paid for more than 3000 items, which were distributed across the Auckland, Wellington, Canterbury, and Otago Museums in 1948 and 1949 by Roger Duff, the then curator of Canterbury Museum.

The collection remained largely undisturbed in Aotearoa – until indigenous Easter Island whānau investigations discovered two of their kōiwi tāngata were amongst the collection. The Rapa Nui tūpuna, kept in Christchurch and Dunedin, have been in New Zealand for 70 years and were part of the Oldman collection.
Without funding, governmental support, or experience in the arena of customs and international authorities, a handful of Rapa Nui whānui began the repatriation process five years ago, armed only with a determination to bring home their tūpuna.
This is their story. 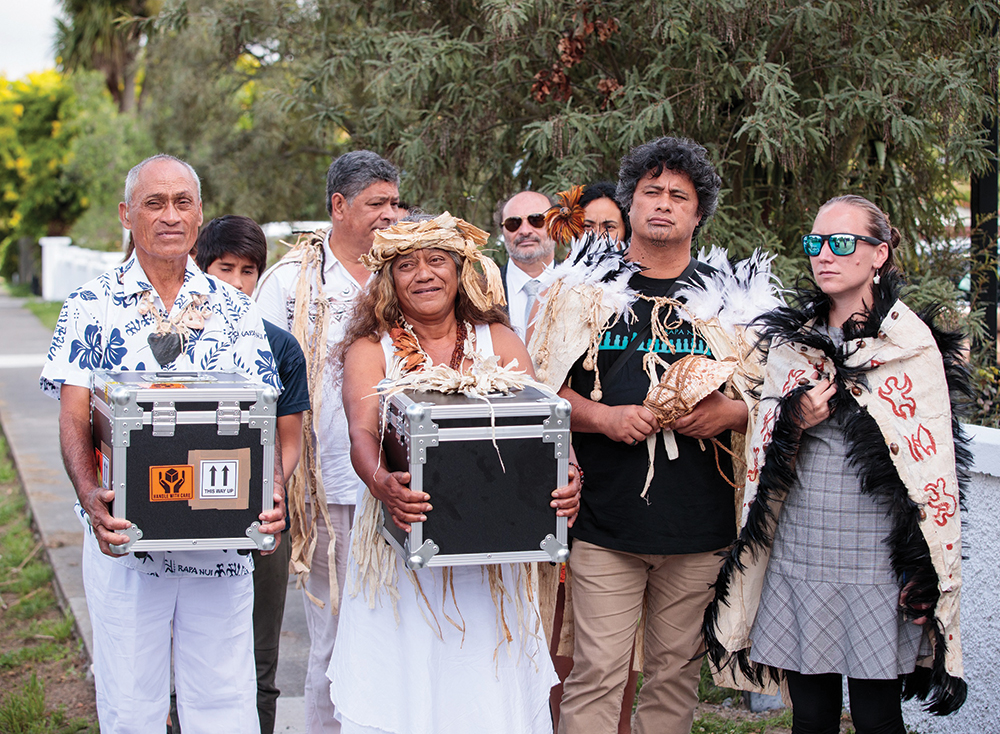 On a sunny Saturday, 27 January 2017, the Rapa Nui Ka Haka Hoki Mai Te Mana Tūpuna Repatriation Programme delegations arrived Tuahiwi Marae to acknowledge and thank all those who made it possible for them to reclaim their kōiwi tūpuna.
The kaumātua, repatriation researchers, and government officials were met by mana whenua hapū Ngāi Tūāhuriri, Ngāi Tahu, and Canterbury Museum personnel, and brought onto the marae with a pōwhiri. There, within the mantle of Mahaanui II, they became the first of their nation to reconnect with two unknown ancestors in what is likely to be almost a century.
The tūpuna were farewelled and handed back to Rapa Nui care by Canterbury Museum and Otago Museum, supported by Ngāi Tūāhuriri, Ngāti Huirapa and Ngāi Tahu whānui, and have no returned home in the first repatriation ever to the island.
Lynne-Harata Te Aika, Corban Te Aika and Puamiria Parata-Goodall were privileged to accompany the Rapa Nui delegation and kōiwi back to the island, completing the duty of care Ngāi Tūāhuriri has carried. The tūpuna have been placed in a wāhi tapu until the community can collectively decide on the most appropriate final resting place.
Above: Rapa Nui delegation arriving at Tuahiwi Marae – back, left to right, Tamaroa Rapu, Jose Rapu, Angel Cabeza, Tarita Rapu; front, left to right, Joaquin (Nizo) Tuki Tepano, Ida (Piru) Huke Atan, Lynn Rapu, Anais Huke.

The Rapa Nui delegation is staying at an Airbnb in Mairehau, Ōtautahi. Mario Tuki, Collections Manager of the Anthropological Easter Island Museum, quickly whips on a shirt over the top of his shorts and proudly arranges his pounamu taonga for the camera. As if at an aunty’s house, I am invited to make myself a cup of coffee. One of the elders offers kai – meat from a half-eaten joint of what looks like mutton – and we settle in to each other’s company, communicating through common key words in te reo Māori and te reo Rapa Nui.

Mario is also officially the Rapa Nui Ka Haka Hoki Mai Te Mana Tupuna Repatriation Programme Coordinator and is fluent in English, so is nominated to speak on behalf of the kaumātua delegation.

“As young people on the repatriation programme, our role is as students. We are here with our elders to learn, all the time. The kaupapa of repatriation is held, and was started by, our kaumātua, some of whom are not with us anymore. One of them, who is an important icon to us, is Mama Piru.” Mario smiles up at Piru Huke as she skirts around us to hang a few items of clothing out in the sun.

“She is not so old, but she has 38 years of experience in this. She went out, by herself, into the world, and started to research and investigate where our tūpuna and taonga were. She did the whole job by herself, with no support, no money. So for me, she is an authority in these repatriation issues. She is also part of the advisory panel of the repatriation process, which is made up of elders, with support from us young people.”

Mama Piru is a diminutive, smiling figure, chatty and friendly. But the steely strength behind her eyes echoes that which might have been in the eyes of the Ngāi Tahu warriors in their fight for Te Kerēme. Her character and deeds epitomise clear parallels between the Rapa Nui battle for repatriation of tūpuna, and the Ngāi Tahu struggle for settlement.

Rapa Nui is a volcanic island at the south-east point of the Polynesian triangle, isolated by more than 2000km of ocean in every direction. It is also known as Easter Island, named after the Dutch discovery of the motu on Easter Sunday, 1722. Rapa Nui has become synonymous with the iconic moai – huge stone statues erected across the island.

Carbon dating estimates the island was first populated by Polynesian voyagers sometime between 700–1100 AD, and since then, the people of Rapa Nui have endured the trials of harsh Pacific conditions, depleted resources, civil war, colonisation, slavery, and disease.

Although first European contact occurred in the 1700s, it was not until the 1860s that the full might of the outside world began to violently disrupt the island. Peruvian slavers terrorised Rapa Nui over the course of several months in 1862, eventually sailing away with nearly 1500 men, women and children – about half the indigenous population. Over the next five years, survivors of the slave raids returned to Rapa Nui, bringing with them European diseases, further decimating the tribes. In the 1870s, Roman Catholic missionaries relocated almost the entire population to the Gambier Islands in French Polynesia, after disagreements with settler landowners.

“The matter of kōiwi tangata is something very sensitive to us, and to you as Māori. Because it is different to say, ‘Give me back my pencil,’ versus ‘Give me back my tūpuna’. We have to put the idea, the vision and the importance of what we are trying to do, to the authorities in Chile. Previously, the belief has been that these things are in the museums for a reason; why should they give them back? But it is changing. We have more politicians, ambassadors, representing us and bringing these issues to the political table.”
Mario Tuki Collections Manager of the Anthropological Easter Island Museum

Mario explains that although so much was lost in that dark chapter of the island history, the Rapa Nui culture has experienced a strong renaissance for decades now, providing a genesis for the current repatriation programme.

However, he says that despite this renaissance, the relationship between Rapa Nui and the Chilean government is “20 years behind” what is experienced between Māori, the New Zealand government, and the British Crown in Aotearoa.

Today, Rapa Nui is a special territory of Chile and is governed by Chilean law from 3690km away – more than four times the distance between New Zealand and the Chatham Islands. The population is 7750 (2017 census), and about 60 per cent are of non-Rapa Nui descent.

Every indigenous person is able to trace their lineage back to one of the 36 families who managed to stabilise the indigenous population in the 19th century. But until recently, these descendants have struggled to have their collective voice heard within the Chilean government.

“Most of my kaumātua and myself are surprised – in a good way – by our experiences here in Aotearoa. It’s a surprise because the repatriation was treated with a lot of respect, and handled in a very Polynesian way. We feel at home here. We can feel connected with the process – it is not only official and dealing with authorities; we are also able to be with the iwi and the whenua.

“And for us, that is a great difference to how this issue is treated in Chile. Here, it is like being back in Rapa Nui and going to my neighbours, who are also family. It is a unique example of how things work here in Aotearoa, and it sets a good example for our next mission – how to do it, what steps to take.” 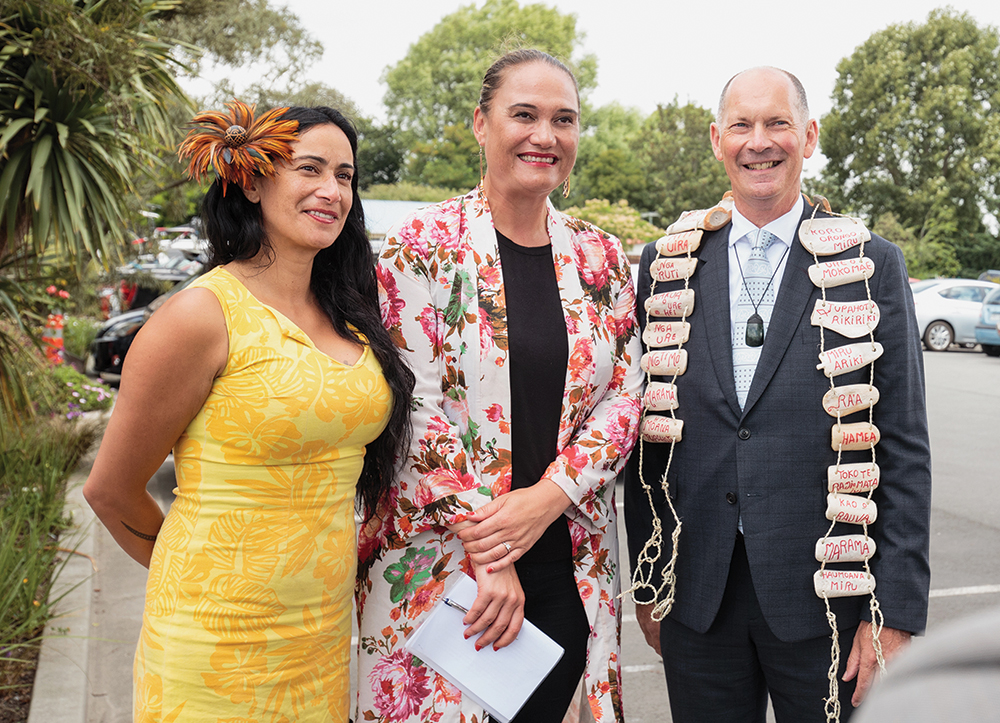 Mario and his companions are hopeful that the presence of Chilean government representatives on the delegation will provide a catalyst for shifts in thinking on the mainland “back home”.

“I cannot say that the word repatriation always draws a good response from these entities … Actually, sometimes it is followed by a big ‘no’.

“We have to put the idea, the vision and the importance of what we are trying to do, to the authorities in Chile. Previously, the belief has been that these things are in the museums for a reason; why should they give them back?

“But it is changing. We have more politicians, ambassadors, representing us and bringing these issues to the political table.”

Mario says small steps of progress have been evident through visits by Chilean representatives to Rapa Nui for the first time. Since the repatriation process was set in motion by Mama Piru and the advisory panel five years ago, Chilean authorities have visited to discuss the programme.

“They came to our house. They have shared with us. We had the opportunity to sit at the same table and speak openly. I think that is a major indication that times are changing.

“The subject of repatriation is becoming bigger and more important around the world. This is a good period of time for us to be beginning endeavours to repatriate our tūpuna and our taonga home. People are more open to it now.”

When I spoke with Anthony on the eve of the transfer ceremony at Tuahiwi, he reflected that, in his 20 years as Director, there has been no template or blueprint for how something as significant as a repatriation works.

“It can be different in every case, because each tupuna is a different individual; but in this case it was very simple and straight-forward – there were no complications or doubts at all.

“The ancestors have been from Rapa Nui to London, although we don’t know where they went in between, then from London back to Aotearoa, and now will complete the journey home. It’s a really symbolic and important thing to happen.” 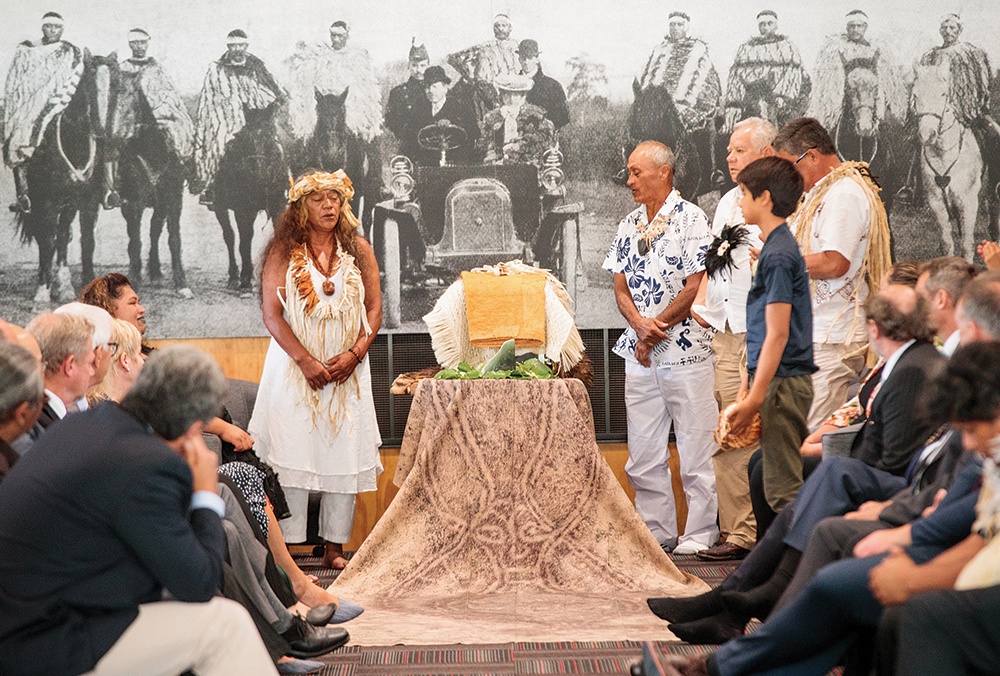 Puamiria Parata-Goodall has been a driving force behind this repatriation since she became the chair of the Canterbury Museum Māori Advisory Board, Ōhākī o Ngā Tīpuna, in 2017.

“When [the Canterbury Museum] received the tono from Rapa Nui, it was obvious – we knew how important it was for these tūpuna to go home. Te Papa has been doing some amazing work under the Karaka Aotearoa programme, so we are all aware of the significance of repatriation.”

Karanga Aotearoa is the New Zealand repatriation programme run by The Museum of New Zealand Te Papa Tongarewa. Since 2013, the museum has been government-mandated to repatriate Moriori and Māori kōiwi from institutions around the world.

“Part of the value of this process is that it has helped deepen our museums’ understanding around the significance of iwi and whānau entrusting taonga to the care of museums – and that we can help with that care for our taonga,” Puamiria says.

“We are not a culture that should be left in a store room, cold and sitting away from us and from the world. This was an amazing opportunity for Canterbury Museum to be part of our living Polynesian cultures and to understand just how important that living heartbeat is. These tupuna are still very much alive to us and to Rapa Nui.

The final word belongs to the Rapa Nui whānau, conveyed by their spokesperson Mario. “Thank you, thank you, thank you. To the iwi, to the museums, to the people of Aotearoa. Our kaumātua also say thank you. Now we have our responsibility to our tūpuna to keep going.”