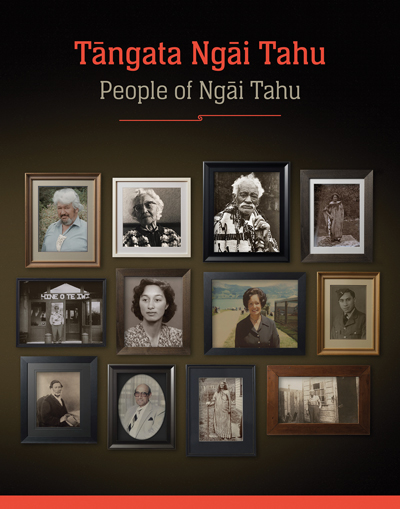 This splendid book came from an agreement between the publishers in early 2017 to produce a book of Ngāi Tahu biographies to coincide with the 20th anniversary of the tribe’s Te Tiriti settlement. The editors acknowledge it was a difficult task to select the 50 people whose stories would feature in the first volume, leading to some omissions that will no doubt be rectified by subsequent volumes. The selection covers a wide range of people – some well-known tribal figures, and others more known through their activities with hapū or whānau. These whakapapa-centred biographies span 200 years of our history, and were prepared and collated by the team at Te Rūnanga o Ngāi Tahu Archives, along with history students and whānau members. And so, “interviews and conversations … have taken place at kitchen tables from Rotorua to Awarua.” An introductory section on whānui also provides the background to Te Kerēme that occupied and underpinned the lives of many Ngāi Tahu at the time. Being asked to review a taoka like this is both an honour and a challenge.

The selection of tūpuna included is broad, with a stunning array of photographs. I have made this a more personal review by focussing on the biographies of those I have known or interacted with while they were alive. My engagement with Ngāi Tahu began in the 80s and in earnest in 1992, when I came down to Waihao with a film crew to interview Thor Heyerdahl, of Kon-Tiki fame. He was coming to Waihao to talk to Tim Te Maiharoa and Kelly Davis about mōkihi – our raupō reed boats and rafts – of which they were the experts. Some examples were kept at Waihao. So began my search for my whakapapa and my attendance at every Hui-ā-Tau from that time on. Before the pōwhiri, Kelly came up to me and said, “Hey, you’re takata whenua to Waihao – come over onto this side.” Kelly was a complex person, and as this book shows, “he was a passionate advocate for the protection of Ngāi Tahu customary rights, mahinga kai, and the area in and around his beloved Waihao River.” He and I were on the Te Rūnanga governance table for Waihao together as Representative and Alternate until his death in 2006, and afterwards I became the Representative.

At those Hui-ā-Tau I can remember the line-up at the front of the venue of the kuia and koro in comfortable chairs, such as Auntie Magda, Cath Brown, Kera Browne, Maru Stirling, George Te Au, and many others in this book. They would bestride the pae as befitted their age and wisdom. Others included Trevor Howse, who was a key researcher for the Ngāi Tahu Māori Trust board during the Waitangi Tribunal hearings, and was on the “A-Team” of Te Kerēme negotiations in 1997–1998, with whom I sometimes worked. Trevor never lost his interest in the natural environment, returning many times to Waihao marae as a key figure in getting the web-based cultural mapping project over the line.

Erihapeti Rehu-Murchie was another kuia who was active in the arts, and an accomplished actor performing in Bruce Mason’s The Pōhutukawa Tree at Downstage Theatre in Wellington in 1984. She became a Human Rights Commissioner, and, as a member of the Māori Women’s Welfare League, became its research director and later President. Her headstone at the urupā at Arowhenua reads, “He Taua Tino Rawe.”

Wiremu (Bill) Solomon, from Ōaro, was the Kaikōura representative on the Ngāi Tahu Māori Trust Board for 20 years from 1977. He was instrumental in gaining Marae Reserve status for the old Takahanga pā site in Kaikōura, with the new marae opening in 1992. He also got Whale Watch Kaikōura off the ground, despite local resistance. He insisted that local whānau decorate the wharenui themselves, building their skills as they did so. He died unexpectedly while carving for the new wharenui at Awarua (Bluff) in 2001.

Maru Stirling, who also had Ngāti Porou roots, was a stalwart supporter of the revitalisation of te reo and the kōhanga reo movement. She was also appointed with Kukupa Tirikatene as a resident kaumātua for the Mō Tātou: The Ngāi Tahu Whānui exhibition at Te Papa Tongarewa in Te Whanganui-a-Tara from 2006 to 2009, which is where I met her again.

This is only a brief sketch of the mine of information and photographs displaying the lives of these tūpuna. Yet this is a significant achievement so far, and lets our forebears shine enough to make the present generation thrill with pride. 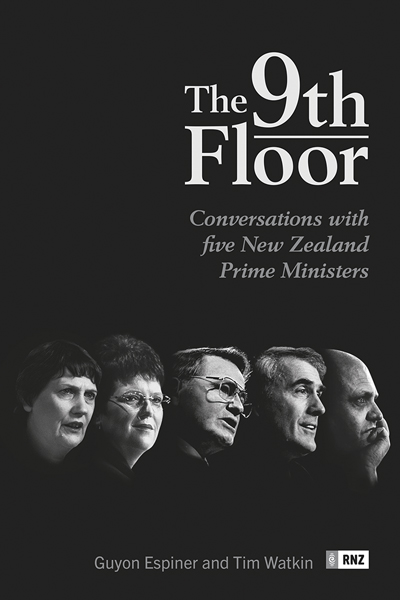 Disclaimer: I am a political tragic. When I was young I was once asked what I wanted to be when I grew up, and without hesitation I answered “Prime Minister”. Thankfully I have somewhat moved on from that dream, but am still rather obsessed with politics and the machinations of government. This book reignited my internal conflict as to whether this would be the best or the worst job ever.

This book contains transcripts of interviews with five former Prime Ministers of New Zealand: (Geoffrey Palmer, Mike Moore, Jim Bolger, Jenny Shipley, and Helen Clark). It also contains a small essay prior to each transcript providing context and analysis by the interviewer. There are pros and cons to this format, but it does allow for the narrative to be told from the Prime Ministers’ perspective, which is the selling point for this book.

One surprising theme that was prevalent throughout these interviews was the human impact that power has on an individual. How these five individuals adjusted (or didn’t) was a fascinating insight. I found the earlier Prime Ministers were much more forthcoming and frank with how they viewed their achievements or lack thereof; perhaps due to the passing of time and the chance to meaningfully reflect. The time each spent as Prime Minister also varied, from two months to nine years, but there was more reflection and frankness from those who had the least amount of time in the role.

While the interviews themselves were fascinating, I particularly enjoyed the analysis of each of the former Prime Ministers, three of whom held the role before I was born. This book also provides an interesting depiction of the political and historic context in which these five people led our country.

The interviews in this book are well conducted and do challenge the former Prime Ministers, although in some cases I found that they were somewhat let off the hook in the interest of civility. In particular I was unimpressed with the answers by Helen Clark regarding the Seabed and Foreshore issue. In some cases, the questions that weren’t asked or answered spoke volumes.

Overall this book provides a unique take on the most powerful job in New Zealand. It is not a taxing read, and I would recommend it for those interested in the machinations of power, or in furthering their understanding of our more recent history through the lens of the decision makers. 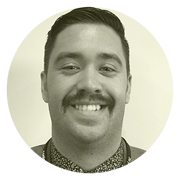 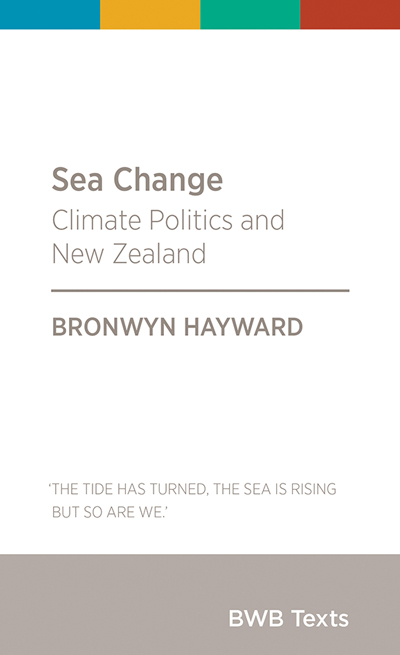 Bronwyn Hayward’s contribution to the Bridget Williams Books series of “short books on big subjects” is highlighting the social and cultural dimensions of climate change politics in New Zealand. Its importance, as with many of the books in this series, is the gap it is seeking to fill in public debate. The author notes how rare it is for issues of inequality to be mentioned; or issues associated with climate justice, such as environmental racism and decolonisation; or intergenerational inequity.

This book is speaking to the power of flax roots action, collective mobilisation, and shared political vision for change; working on the fundamentals of economy and society as necessary elements of climate change response. Without doubt there are opportunities for positive transformation that cannot be realised without such action, mobilisation, and political vision.

Maybe it’s because I’ve already been thinking about climate change within the context of Ngāi Tahu values and aspirations that it feels familiar, rather than creative or challenging. It was important, for instance, to read thoughts about grief in relation to effects on treasured places, and solidarity in the face of suffering. Maybe it’s because the themes of citizenship, justice, and political transformation are long-standing threads of political discourse that it seems to remind, rather than extend.

Ultimately, it is good to be reminded and for these dimensions to be elevated, as a companion to existing reports and political movements that describe pathways for change in New Zealand. We absolutely need all hands and all networks at all levels and from every political corner, to meet the challenges ahead. Kua takoto te mānuka, kawe ake. 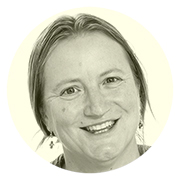 Maria Bartlett was born in Motueka, within a family of horticultural farmers. She lives with her son in Horomaka/Banks Peninsula and has been working within the Office of Te Rūnanga since the 2011 earthquakes. Tribal response to climate change has been a key focus of her mahi within Te Whakaariki, the Strategy & Influence team, building on a strong personal interest in intergenerational resilience. 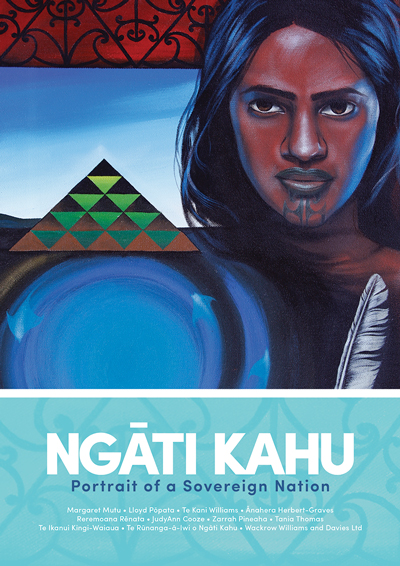 In this book, University of Auckland Professor Margaret Mutu and a collection of writers share the recollections of kuia and kaumātua from the 16 hapū of Ngāti Kahu. These oral histories include stories that capture special relationships with the land, flora, and fauna, peppered with pepeha, whakapapa, and kōrero nehe. Te reo Māori enthusiasts will enjoy reading this history in the Ngāti Kahu dialect, supported by the English translation.

The chapters that describe the interaction between Ngāti Kahu and its Pākehā guest are informative and confronting. It is a familiar story of deprivation, theft of land, the mechanisms used by the government to disenfranchise a people, and the numerous breaches of The Treaty of Waitangi. As a result the iwi has suffered the loss of 95 per cent of its lands, and also its language, through the Pākehā education system.

The final chapters outline how these breaches can be remedied, stating what a final settlement looks like through the eyes of those who suffered the atrocities. They address what it will take to repair the extensive damage. This book contains themes of a nation resolute in its stance to maintain its sovereignty, despite the difficulties it has faced for many generations.

As a descendant of Kahutianui and Parata living in Te Waipounamu, I’m inspired to find out more from my own whānau. This book is a reminder our rich history and the aspirations we have for future generations. 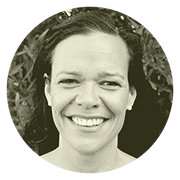 Rahera Clark (Kāi Tahu, Ngāti Kahu, Ngā Puhi) was born in Christchurch, is a mother, and school teacher currently studying a Masters in Māori Education, at the University of Canterbury. After a long stay in Australia she has returned to Te Wai Pounamu, and enjoys participating fully in events such as Kura Reo Kāi Tahu and Aōraki Matatū. Rahera is passionate about reviving te reo Māori me ōna tikaka and is grateful for the opportunities to embrace her Kāi Tahutaka.