A journey of reconnection to Te Ao Māori has been the making of Rue-Jade Morgan (Jade). A disrupted childhood saw him incarcerated by the age of 19. He began practicing mau rākau and immersing himself in tikanga and tradition, a transformation that set him on a completely different path. Today, he is a lecturer at Otago Polytechnic and was recently recognised by the Minister of Corrections for his work with Otago Corrections Facility. Nā Rob Tipa. 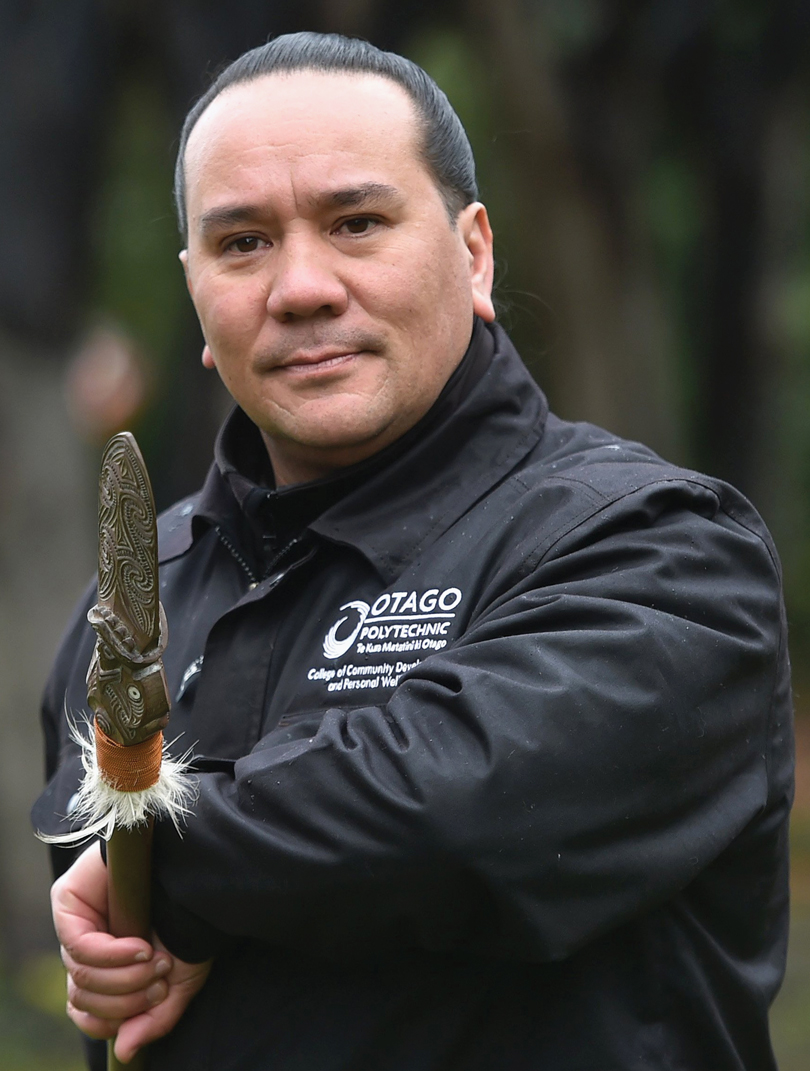 This ancient creation whakataukī holds a special significance for Rue-Jade Morgan (Kāi Tahu – Kāti Wheke), a young man who rediscovered his love of Te Ao Māori while serving a prison sentence for a serious crime and credits that awakening for saving his life.

Trapped in a violent gang culture that was hostile on all fronts, Jade says he was lucky to survive a horrific childhood.

The memories of his upbringing – during which his family was heavily involved in bringing the Mongrel Mob to Dunedin during the early 1980s – are painful, still raw enough to bring tears to his eyes today.

“For a period I was brought up in the corner like a dog. I had a collar, I had a bowl and I had to bark to get my needs met.”

He points to a faint scar on his forehead from the time when he split his head open from being forced to head-butt the corner of a cinder block wall in a brutal test of obedience for him and his cousins.

He recalls playing hide and seek when he was a child, and finding a member of a rival gang pouring petrol on the window sills of their gang house. The only thing that prevented the house from burning to the ground was heavy rain.

Jade’s family moved back to Christchurch when he was about seven years-old. He found refuge at school, and spending precious time with his grandparents.

“In a tough gang environment, there was one constant and that was my taua. She was the backbone of our family,” he says.

She shared her core beliefs of Te Ao Māori with him, values that he rediscovered in prison many years later and have since proved his salvation.

“I guess I’ve been lucky to have an amicable personality so I got on with a lot of people more than not. I guess my childhood had taught me to roll with the punches.

By the time he was 19, Jade found himself “in the belly of the beast” – in prison on a six-year sentence for a series of aggravated robberies involving a firearm.

One enduring memory of his court appearance was seeing his mother sobbing.

“I’d always been protective of her and my family, but to see Mum sobbing broke my heart,” he says.

“I honestly thought I’d be in jail for at least 50 years. I’m actually grateful I was caught by the law when I was because otherwise I would be a horrible person that I didn’t want to be, possibly doing life in prison or pushing up daisies.”

Roll the clock forward 18 years and this eloquent, inspirational young Māori leader has successfully turned his life around with a remarkable personal rehabilitation.

“I’ve always had a hunger for taha Māori. It was like the light switched on. After finding myself in Te Ao Māori, everything I was doing within that environment was so positive, calming, and settling. It was life-changing, absolutely life-saving.”

He is a respected lecturer on the campus of Otago Polytechnic, and has returned to “the belly of the beast” to help Māori inmates of Otago Corrections Facility (OCF) follow a similar pathway.

He credits his own “awakening” to the positive influence of a Māori mentor who helped him reconnect to Te Ao Māori through the discipline of mau rākau, a traditional form of Māori martial arts.

Now an experienced mau rākau instructor himself, Jade recently began delivering a cultural engagement programme at OCF to help rehabilitate inmates through tikanga, education, and the discipline of learning this ancient style of martial arts.

Earlier this month his transformational work with prisoners and young men on probation was recognised by the Minister of Corrections Kelvin Davis. Jade was highly commended in the Arts Access Aotearoa Corrections Māui Tikitiki a Taranga Awards in Parliament.

Jade says it took him two years of his own six-year sentence “to get over myself, to stop blaming everyone else, and to stop lying to myself.”

He says prison was just his second experience of an environment where he had positive male influences that weren’t monsters or villains.

While he accepted prison officers had a job to do, those he dealt with were good men who treated him fairly and humanely.

“I’ll do anything Māori,” he told his custodians. “I’ve spent 19 years in the Pākehā world and look where it has got me. I want to spend the rest of my life, as much as I can, in Te Ao Māori.”

Jade got to know his prison officers through a common interest in jiu-jitsu, the Japanese martial art of unarmed combat, which had a positive influence on his childhood.

Jade proved proficient in this discipline as a junior, and when he had progressed as far as he could, he was invited to join the senior ranks at the age of 13.

Prison officers offered him a chance to attend a marae-based wānanga in mau rākau outside the wire, and warned him not to blow this chance.

Ironically, for a young man convicted of a serious crime using a weapon, Jade says that the weapons-based martial arts wānanga at Takahanga marae in Kaikōura changed his life for the better.

He credits his mau rākau instructor – now his personal mentor and rangatira – Te Mairiki Williams (Kāi Te Ruahikihiki), from Taumutu, for turning his life around and helping him reclaim his identity.

“I’ve always had a hunger for taha Māori,” he says. “It was like the light switched on. After finding myself in Te Ao Māori, everything I was doing within that environment was so positive, calming, and settling.

“It was life-changing, absolutely life-saving.

“When mau rākau came to me in jail, I shone,” he says. “I loved it. It was the regimented, militaristic discipline, the cohesion, and the genuine bond between people to look after each other that really appealed.”

His mentor recognised he had an ability to take in information, retain it, and then pass it on to others – a natural teacher.

“When I started mau rākau, it was all about learning to be a warrior and how to use a weapon; but the more you learn about it the more peaceful you become.”

Jade says his experience of mau rākau was not unique, and many other men who have come through the programme haven’t looked back.

“Spiritually, my soul is singing. I’m so blessed that I’m in a position to use an adverse childhood reality of mine to relate to these men (released prisoners) who may have shared a similar traumatic upbringing.”

“A few people have fallen by the wayside, which is what happens with a net. You can’t catch everybody. But some have come back knowing that the facility is there; that whenever they want to re-engage they are welcome back.”

Jade was released from prison in August 1999 after serving four years of his six-year sentence. He enrolled at the Christchurch Polytechnic Institute of Technology (now Ara) to learn te reo. He joined a kapa haka group, and continued studying mau rākau.

His probation officer could see he was positively engaged with his mentor and Te Ao Māori, so he was given plenty of freedom and support to follow his passion.

Jade and his mentor were shoulder-tapped in 2002 to start a mau rākau programme at Rehua Marae in Christchurch for at-risk youth and young men on probation.

He says they were able to “shine some sunlight into these young people’s lives, but it wasn’t all roses.”

Two of their charges burgled a neighbour, and one of the lowest points of the programme for him occurred when one of the youths took his own life, years after attending Jade’s youth at-risk programme.

Since 2006, Jade has run similar community and school pro-grammes for He Waka Tapu in Christchurch, as well as getting a start in Dunedin with community non-government organisation Te Roopu Tautoko Ki Te Tonga. Jade also taught te reo and tikanga at Dunedin Adult Community Education classes.

The mau rākau programme he helped develop and teaches has evolved to the point where Jade and fellow instructors are now taking the discipline back into prisons in Canterbury and Otago.

The programme targets Māori who want to make positive changes in their lives, to help them understand who they are and where they come from.

Some prisoners have progressed to a stage where they have been transferred to low-security areas and become eligible for prison employment and training, which helps equip them for life after prison.

In his work as a lecturer at Otago Polytechnic, Jade encourages released prisoners to pursue further education opportunities, which research suggests is a powerful tool that contributes to positive lifestyle changes for them and their families.

“Spiritually, my soul is singing,” he says. “I’m so blessed that I’m in a position to use an adverse childhood reality of mine to relate to these men who may have shared a similar traumatic upbringing.”