Liam Henry-Tikao’s life was at a crossroads. Prison was a very real threat until, unexpectedly, a Ngāi Tahu agriculture course came along and dairy farming saved his life. 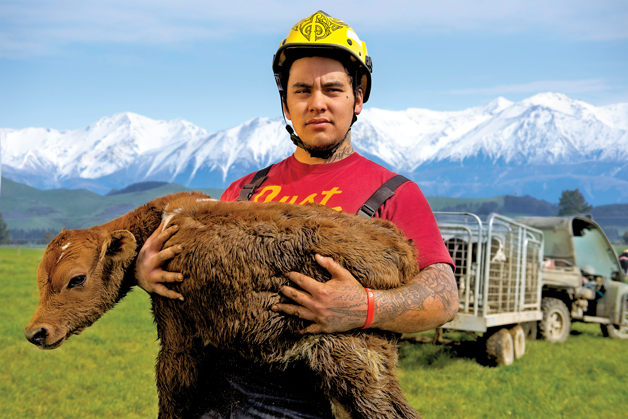 Liam Henry-Tikao was failing in the classroom but on the streets, he was doing pretty well. At least, that’s what he told himself.

Street graffiti was his creative outlet, and he was part of a loose bunch of friends who enjoyed a party.

“Yeah, there was a naughty aspect,” he says.

“We were young fellas getting up to mischief – partying, alcohol, fights. When you’ve got your bros, you create a bit of havoc now and then.

“Being a young Māori fella, you like doing things your own way, so when someone is strict you think, ‘Don’t start telling me what to do.’”

Liam (Ngāi Tahu) remembers it as “a good life, but every week was the same.

“Sometimes, if you didn’t have a job, well, you’ve got to get money somehow. You could say we were entrepreneurs in our own back yard.”

Liam’s final escapade was stealing from a Christchurch mall. He felt the strong hand of a security guard on his shoulder, so he tried to run. There was a struggle and a stand of shampoo bottles went flying.

“I think adrenaline kept me running. I got out the door and over a fence, but I still got caught. And I got a bracelet for community detention.”

Then he breached bail and found himself sentenced to a year of supervision with a special condition that he attend a three-day cultural wānanga.

“The main thing was that Matua (Te Mairiki) made us turn away from distractions. He said us Māori get distracted by too much.

“He’d say, ‘Our ancestors didn’t stop on the side of the beach for a session, did they?’

“So you live like an old school Māori. You cook off a fire, shower in the sea. It was freezing. Matua would say, ‘I haven’t seen so many grown men laughing’, and that’s what brought us together.”

The men performed a haka pōwhiri for visitors, including their probation workers; and at graduation Liam gave a speech.

“I said something like this needs to happen to every Māori. Not even just Māori but every person in New Zealand.

“I feel closer to the Māori way now. We might be different iwi but when we get together in a corner, we’re just the same.”

Leaving Te Taumutu Rūnanga, Liam’s father urged him to try the Ngāi Tahu Farming programme, Whenua Kura. Initially Liam couldn’t see the point, but with nothing to show in his life except outstanding court fines and debt, he signed up.

“I thought I’d just wing it, but farming was the best thing that ever happened.”

In May, Liam was one of the first batch of 11 graduates from Whenua Kura. Manager Renata Hakiwai says the programme teaches more than just the practicalities of farming – it extends to budget training and whānau transformation.

“So, through education, they learn,” Renata says.

“And it’s not just that one person. The changes they make trickle through their whole whānau.

“Liam is a good example of transformation. He was at a real crossroads, but he’s turned his life around and he’s found something he’s very good at.”

Even before graduation, he was employed on a Ngāi Tahu dairy farm and reunited with his partner, Selina Nikora, 19.

So past the macrocarpa hedges and red-flagged letterboxes, out by Eyrewell Forest where the mountains go black as the sun goes down, the couple live with their six-month old baby, Honey-Lee Henry-Tikao. Rent is deducted directly from his wage, and he continues to pay off his debts responsibly.

“It was the big city,” Liam says. “There’s always trouble in the big cities.

“My family was always more connected to Ngāi Tahu than I was. I was like the cousin or the nephew that didn’t attend the gatherings. I had my own agenda, I was always busy – not busy being constructive with my life – but there was always something better I wanted to do. I had a bit of a brain on me, but I wasn’t using it.”

Initially Selina wasn’t keen on moving to the country, but she felt at home on her first visit. There are other couples on the surrounding Ngāi Tahu farms, including one who has a baby the same age as Honey-Lee.

“I love it here too,” Selina says.

“As soon as you get into town you can feel the drama. It’s a different culture out here.”

There is one problem though. She hasn’t been able to stop Liam’s graffiti art addiction. She has to write “do not doodle” on the corner of all her shopping lists.

Farm life is peaceful but dairy farming is not easy.

Depending on the roster, Liam will be up well before dawn because it’s “cups on at 4 a.m.” for the cows. As a dairy assistant, it means scrubbing the shed at the end of a milking session, and there’s no easy way to say this – it is literally a crap job.

“It’s hard out funny. One of the girls got a head plop the other day when she was kinda under the cow checking for mastitis.

“Sometimes the cows cough at the same time and it comes out real powerful. Dairy sheds are crazy. You can laugh if it happens to someone else, because you know it’ll be your turn next.”

Ngāi Tahu Farming is based in two areas of Canterbury – Balmoral Forest for the sheep and beef, while dairy and grazing crops are at Eyrewell.

It can take seven years to become a farm manager, but Liam has been told that if he works hard, he could make it in about four years.

His parents were disappointed in the path their son had taken in his earlier years but now they couldn’t be prouder, he says.

“I’ve stepped up and that means a lot. I can see this as my future because it’s the only future I’ve got.

“I’m definitely a family man now. I still drink but not out of control – not like us bros used to. When my friends come out here they just have a couple of beers. They’re boring now too, they go home to their babies.”

One of his best friends from graffiti days, Kent Natsuhara, has his own car sales yard, a baby, and is getting married soon. Liam will be one of the groomsmen.

“Kent and me were always on the same page. We lost a lot of bros along the journey with people not being loyal. You’d meet people and think they were all right but they’d end up doing stuff a mate just wouldn’t do. Now I’m out here and really happy.

Whenua Kura seeks to grow Māori leadership in agriculture, and is a Ngāi Tahu-led partnership between Te Tapuae o Rehua, Ngāi Tahu Farming, and Lincoln University. The next intake for both beginners and those already in the industry wanting to learn leadership is July 29.