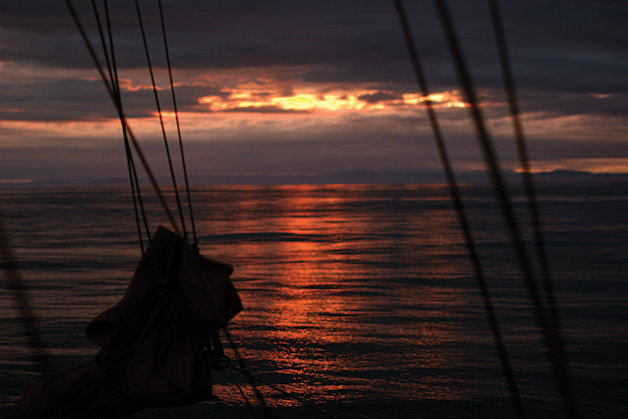 Kaituhi Sampson Karst shares his insights into the skill of the traditional navigator, and reports on his experiences on board Haunui.

On a wet cold morning in May, Haunui sailed into Bluff Harbour. As the skies cleared, the crew of the waka hourua were greeted with a spirited haka pōwhiri from the tauira of Te Wharekura o Arowhenua and Bluff School. It was the first time in hundreds of years that a waka hourua or traditional double-hulled voyaging waka had been in those waters, and hundreds turned out.

For Hoturoa Barclay-Kerr (Tainui), the kaihautū or leader of Haunui, it was almost the final leg of a circumnavigation of New Zealand, and a voyage he had promised to Ngāi Tahu while sailing 25,000 nautical miles across the Pacific.

Haunui is one of seven waka hourua that crossed the Pacific in 2011 as part of the Te Mana o Te Moana voyage in 2011 and 2012 to San Francisco. The voyage was made to raise awareness of the marine environment and to teach a new generation about waka culture and knowledge.

A few days later, Haunui would head across Te Ara a Kiwa to Rakiura, before returning up the east coast of Te Waipounamu and on to Tūranganui-ā-Kiwa/ Poverty Bay and then Tāmaki Makarau/ Auckland and some much-needed maintenance, completing a circumnavigation of Aotearoa.

Brendan Flack from Puketeraki was among the Ngāi Tahu crew to join Haunui in the voyage across the Pacific. He recalls the promise made by Hoturoa, “a commitment to the crew who had sailed on Haunui that he would bring the waka to visit our shores and marae one day.”

Haunui, he says, will feed a fire sparked when kaumoana Kāi Tahu was launched several years ago to provide Kāi Tahu rangatahi with the opportunities to sail as their ancestors did.

The significance of Haunui’s voyage to Te Waipounamu waters may take some time to sink in, Hoturoa says.

“Having some of our whānau from down here on board is a very significant thing. As years go by I think people will come to understand that. I don’t think that it has kicked into the mindsets and the thinking of many people that the arrival of a canoe like this is actually a huge event – something that hasn’t been done for hundreds and hundreds of years.

“I’m not too sure yet if the significance of that effort – in trying to emulate what our ancestors did – is fully realised yet.” 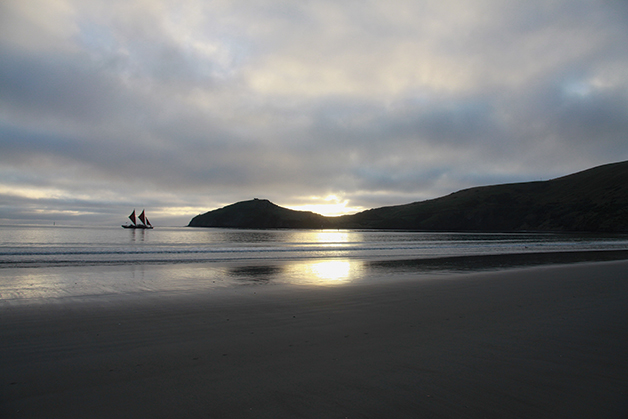 In ancient Polynesia many roles were held in high esteem. The chief and his councillors would govern and keep order. The shaman would act as a medium to the wisdom of the gods, and the warriors were expected to be ready to mobilise if the community was threatened. There was one role, however, that demanded a person of great wisdom who would routinely put his life at risk for the entire tribe. The role was that of the traditional navigator, handed down from father to son. A lifetime would be spent committing information to memory, starting even before birth. When a navigator’s wife became pregnant, she would lower herself into the ocean, submerging her belly button to let the water wash over her belly so her child would be soothed by the rhythmic ocean currents.

Early Polynesian mariners were skilled celestial navigators who knew how to read the signs of the sun, stars, wind, ocean, and clouds. Over many generations they also honed their skills in marine architecture, despite the lack of resources available to them. They discovered that the waka hourua was well suited to navigate the world’s largest ocean. These early navigators designed and engineered cone-shaped sails that allowed the top (with the largest surface area) to harness the wind if the rest of the waka was deep in the trough of a swell in heavy seas. 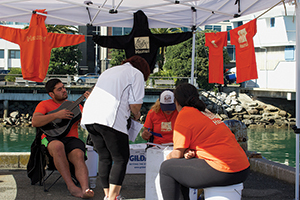 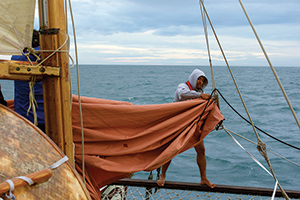 It is recorded that Tupaia of Ra’iātea (Society Islands) boarded Captain James Cook’s HMS Endeavor in 1769. He was a traditional navigator who learned his skills from his father and grandfather. Tupaia was asked to draw a map of the area. Within a short time he presented Cook with a detailed map showing a 3200 kilometre radius that included 130 islands.

Waka traditions steadily declined with the onset of colonisation. Supplies were delivered to islands on a regular basis, and the need for the traditional navigator became redundant.

I was lucky enough to join Haunui in Nelson for the leg to Christchurch, along with Eruera Tarena (Ngāi Tahu – Ngāi Tuāhuriri, Ngāti Porou, Te Whānau a Apanui) and Georgia Rae Flack (Ngāi Tahu – Puketeraki). We all arrived in Nelson a few days before departure and were able to help take locals out on short sails in the harbour. It was a good opportunity to learn the classic sailing knots, and to gain an understanding of raising and dropping the sails and the basics of steering the waka. 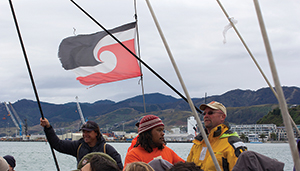 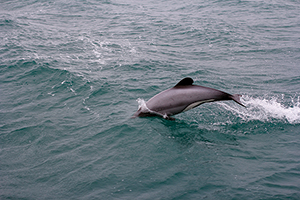 In Nelson we took three groups of locals out every day. When we were out with tour groups, the waka became a sailing classroom. One of our navigators, Manihera Forbes (Tainui) took the lead and welcomed everyone on board. With diagrams in hand, he explained the basics of star navigation and various parts of the waka. He would raise his hand to the horizon to demonstrate how he uses his thumb and index finger to check his heading against the sun. Some of the tours were late in the day, and we would return to the harbour on sunset. Moving smoothly through the water while shades of crimson danced across the ocean below was a remarkable experience. The tours always ended with a karakia, a group photo, and then everyone was presented with a certificate so they could take something away to remember the experience.

Hoturoa Barclay-Kerr is the kaihautū (leader) of Haunui, and after a short journey home, he joined us in Nelson for the trip south. Hoturoa has been sailing the Pacific for 35 years, and he is a man of great mana and wisdom.

At a seminar on traditional navigation with Hoturoa at the local boat club, the function room was full. Hoturoa says occasionally his seminars attract a few people who are still skeptical about the facts of traditional navigation. This suggests there is still a belief amongst the sailing community that the settlement of the Pacific Ocean islands – and subsequently Aotearoa – was just a fortunate mistake of sailors who drifted about the world’s biggest ocean aimlessly.

“There’s this colonised thinking about us only being people who paddle huge carved canoes everywhere. Sometimes people come up to me and say, ‘That’s not a Māori canoe!’ And I say, ‘That’s right, but our ancestors weren’t Māori; they only became Māori after living here for a few hundred years. These are the canoes that brought our people here.’”

Hoturoa is thrilled that so many rangatahi are taking to the oceans to learn about traditional sailing. He also believes that waka hourua can be used to educate tamariki about their tūpuna.

“You can take rangatahi out and show them the bays that their tūpuna settled in. We can recover and reinvigorate stories of ancestors and tūpuna in a way that wins the hearts and minds of rangatahi.” 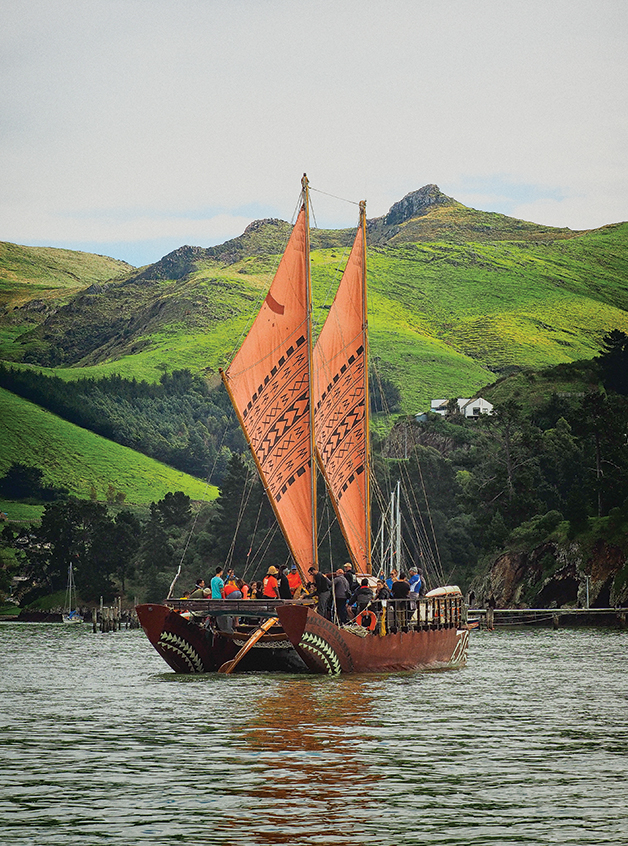 As Hoturoa and our captain Greg Gallop studied the weather patterns on the night before our scheduled departure date, they broke the good news that the winds were looking favourable, so we prepared for an early rise. In the morning we changed sails, loaded the food stores and farewelled our hosts. As we made our way out of the marina, we turned to our new whānau on shore and performed the Haunui haka. It was a stirring moment that I will never forget. As a first-time sailor I felt nervous about the journey, but any anxiety was outweighed by the sense of adventure and an opportunity to connect with my tūpuna.

The work on a voyaging waka is done in a shift or “watch”. We had a rotation of four hours on and eight hours off. My watch team had five people, and we were on watch from 6–10, morning and night. Our watch captain was the very experienced Emma Siope. My favorite part was the chance to see every sunrise and sunset.

The seas were very calm on the way out of Nelson, and at 9.30 pm we were almost at the end of a very uneventful watch. The relaxed atmosphere soon changed as we approached Te Aumiti (French Pass) and heard the roar of white water. Te Aumiti is a narrow passage of water in the Marlborough Sounds that can claim New Zealand’s strongest tidal flows. It is roughly 500 metres across, but powerful tidal currents mean that only one 100-metre stretch of water flanked by two lighthouses can be navigated. There are deep depressions in the ocean floor around the pass, including one which plunges more than 100 metres. Currents create whirlpools in these holes, adding to the difficulty for the navigator.

As we approached the pass we sailed close to the lighthouse on the mainland. In the darkness the lighthouse seemed to rise out of the ocean as it passed by our starboard side. During peak flow, water moves at four metres per second in the throat of the pass. It took two people to wrestle the steering hoe into submission as we made our way past the reef. 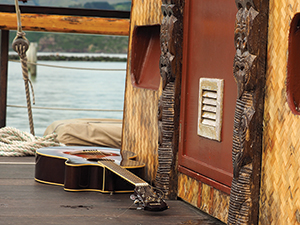 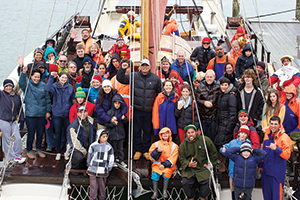 Hoturoa was happy that we sailed through the Pass because of its connection to Kupe and his voyages. “Haunui has sailed past Kupe’s homeland in Hawaiki, so knowing that we’ve sailed past where he came from and where Kupe traveled in Aotearoa is pretty cool.”

Every so often dolphins would appear and swim at the bow of the waka. Seabirds, including albatrosses, accompanied us for the entire journey to Christchurch.

We were expecting northerly winds coming out of Cook Strait, but the winds changed and a southerly started to build. As the watches changed over, we noticed a red moon rising on the horizon, and we were told that there would be a lunar eclipse. That night the southerly got stronger and before long the wind was gusting up to 20 knots. Visibility was poor, but I’ll never forget looking up at the moon while it was in half eclipse, before it was covered by cloud.

The last two days of the four-day voyage were in strong winds and rough seas – conditions which meant more work on deck, trimming sails and grappling with the steering hoe. It also changed our course slightly, and we had to sail east towards the Chatham Islands before cutting back towards Banks Peninsula.

We arrived in Lyttelton in the late afternoon of day four, in steady rainfall. Spending time at sea can change your frame of mind, and now I have a new level of respect and admiration for voyaging waka and traditional navigators. The experience offered me a whole new perspective on our relationships with our Polynesian cousins, and our shared waka traditions. The Pacific Ocean does not separate us – it connects us.