Ōtākou upoko Kuao Langsbury (80) is one of the unsung heroes behind the tribe’s successful Ngāi Tahu Claim that was finally settled by the Crown in 1998, 158 years after the Treaty of Waitangi was signed.

Kaituhi Rob Tipa recently caught up with Kuao at his Dunedin home. 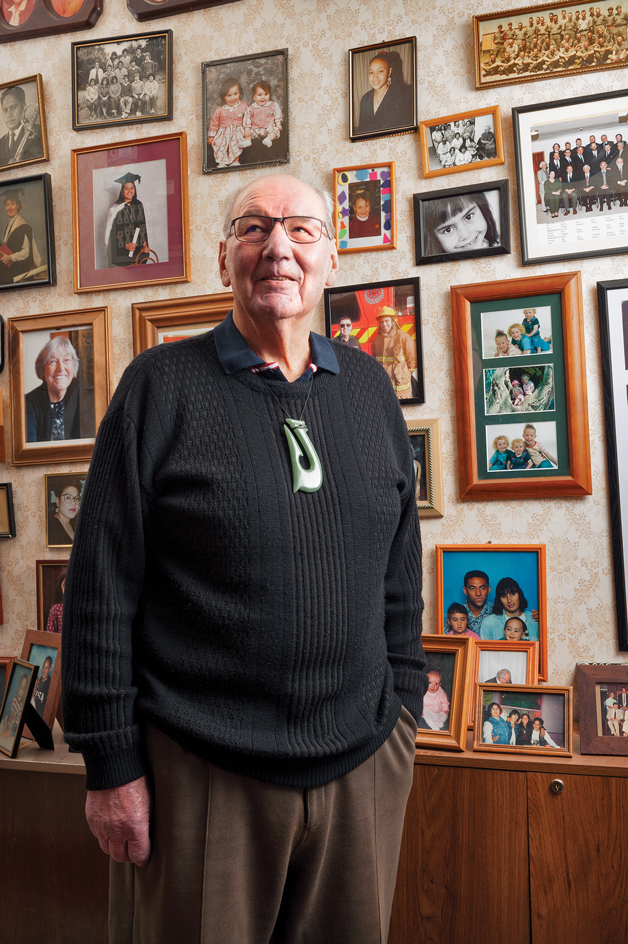 “I always said I’d never get involved in politics but in Ngāi Tahu circles you can’t avoid it,” he jokes.

As one of the tribe’s “A team” negotiators, Kuao says he tried to avoid any major political disputes by keeping his head down and working hard.

While he is proud of his role in the Waitangi Tribunal negotiations, he is still amazed by the determination and resilience of the tūpuna who kept the Ngāi Tahu Claim alive for more than 150 years. He says it still stands as one of the longest-running legal claims in world history.

“Those old people never lost sight of the goal,” he says. “Yes, we were successful in two ways, firstly in setting up a resource for our people forever.

“But it was also successful when we look over our shoulder to the people who came before us and really showed us the way. They would be proud. So we did it for them, we did it for ourselves and we did it for those who come after us.”

Kuao says the Ngāi Tahu negotiators realised they were making history, but one of the decisions they made early in the process was not to take any claim against the Crown that they could not win in court.

He pays special tribute to the inspired leadership of Tā Tipene O’Regan, because the iwi did not have a lot of money to put its case together.

He says Tā Tipene had great contacts with important people in the right places, and when negotiations with the Crown broke down, it took some skillful work by him and then Prime Minister Jim Bolger to get negotiations back on track.

Kuao was born in Ranfurly in the middle of the Great Depression in 1935.

His father Syd Langsbury was an English sailor who served in the Royal Navy in World War I, fought aboard the battleship HMS Conqueror at the Battle of Jutland, and arrived in Dunedin aboard the light cruiser HMS Dunedin.

After about 20 years of service with the Royal Navy his father came ashore and “married a Māori princess from the Kaik”, the youngest daughter of Hohepa Karetai and grand-daughter of Chief Timoti Karetai. The family then moved to Becks in Central Otago.

When World War II broke out, Syd Langsbury was called up to serve in the Royal New Zealand Navy and was assigned to the Tāmaki training base in Auckland. While serving on a minesweeper he lost his life in an accident in Wellington when he was just 42.

When his mother returned to her family at Ōtākou, Kuao was brought up by his uncle Tom Edmonds, who was a farmer, chairman of the Peninsula County Council and a member of the Ngāi Tahu Māori Trust Board.

Kuao has very good memories of growing up on his uncle’s dairy, sheep, and beef farm, and going to school at Ōtākou, which had a roll of 12 or 14 pupils, “half of them related to each other.”

“There was no electricity or telephone,” he recalls. “If you wanted to talk to someone you did it face-to-face. We grew up around the marae, which was just across the paddock from where we lived.”

He went on to King Edward Technical High School in Dunedin for two years and made the school’s first fifteen rugby team at 12 years of age, a strapping lad for his age.

“I left halfway through my third year,” he recalls. “My uncle had a stroke so I left school and returned home to work on the farm, also picking up seasonal work at the freezing works and shearing.”

Kuao says his uncle, a bachelor, was a good farmer, a good businessman, and a good communicator who worked hard to help the family out financially.

“He was a very quiet man. He didn’t say much but he knew his stuff. The most valuable lesson I learnt from him was that if you can’t pay cash for something you can’t afford it, and I’ve lived by that for most of my life.”

Growing up next door to the marae at Ōtākou he became involved in rūnanga politics from an early age. He was elected chairman of the rūnanga at 25 and stepped in and out of that role for the next 25 years.

Kuao developed his business skills as a taxi driver, managed the southern region of a national photographic studio for many years, and managed and later chaired the Ārai Te Uru Kōkiri Centre, a private training institution in Dunedin, until his retirement. 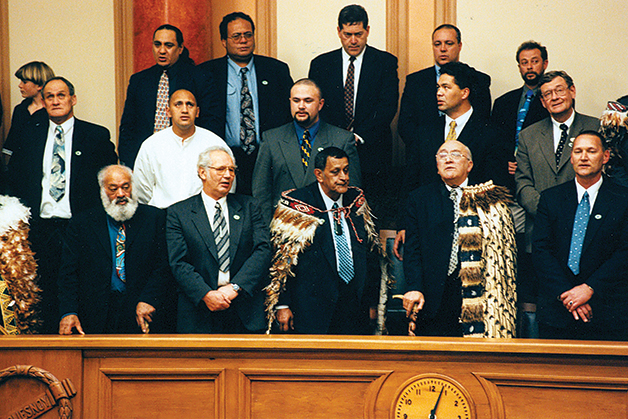 He was elected on to the Ngāi Tahu Māori Trust Board at the age of 45, an easy transition for him under the guidance and advice of senior members of that board.

During his 17 years on the board, he chaired the Ngāi Tahu finance, property, fishing, and holding companies, covering the full gambit of the tribe’s fledgling business interests and investments.

His services to the community were recognised when he was awarded an Officer of the New Zealand Order of Merit (ONZM) in the Queen’s Birthday honours list in 2003.

Kuao says he learnt the value of collective decision-making from an early age and developed a consensus style of leadership. He also had the backing of a supportive family.

“I never tried to dominate a meeting,” he says. “I always believed that everyone sitting at that table all had experience, all had brains, and all had ideas; and I was able to get everyone to contribute to the meeting. Any decision made was a collective one.”
Looking back at the expansive growth of the Ngāi Tahu investment portfolio and increase in its assets since settlement, Kuao is justifiably proud of his contribution. He is particularly proud of the tribe’s prudence in its investments and spending since settlement.

“As far as I’m concerned there are two key resources, money and people,” he says. “It might be early days yet but I think we have to keep building the financial resource.

“You’ve got to keep growing it, but on the other hand you’ve got to find some way of bringing the whole tribe with us and not leave anyone behind.”

Kuao believes the tribe has done some great work for its people.

“I was really blown away by the Hui-ā-Iwi in Dunedin last year,” he says. “It was marvelous, magnificent to see how far we have come in the last 10 years.

“I think we are doing very well, but there must be room for improvement and opportunities to do things better. The best measurement of our progress is the people, not how much money we have in the bank.

“How many doctors, lawyers, teachers, and successful business people do we have, how many people in Parliament or on city or regional councils?” he asks. “It would be a good exercise to find that out, to give us a real picture of where Ngāi Tahu is today.”

However, Kuao still has concerns for those who have been left behind or for those who fall through the cracks, for example the high number of Ngāi Tahu people in prison.

“I think there are a lot of Ngāi Tahu who are not getting any or very little benefit from the Claim, and yet are proud to be Ngāi Tahu,” he says.

Kuao strongly believes the tribe should not lose sight of its financial resources and must ensure it invests wisely.

“There is such a thing as mana, which means you don’t have to make money from every investment,” he says.

When he learnt that the tribe was part owner of a national bus company, he said it gave him huge pride every time he saw that company’s buses around town.

“I thought, that’s ours, it belongs to us and it doesn’t have to make money if it provides a service to our people. It’s something we can be proud of.”

He applied the same principles to the possibility of Ngāi Tahu investing in hostel accommodation for students at the University of Otago and Otago Polytechnic campuses.

“If it provides a service it is something we can be proud of,” he says. For Kuao, any development that helps Ngāi Tahu people from all walks of life has to be good for the iwi.